Apple’s iPad continues to dominate the tablet market despite the best efforts of the Android competition, new research suggests, with record-setting sales of the iOS slate outshining even Samsung’s buoyant numbers. Although mature markets are showing signs of iPad saturation, developing markets are “clearly more than making up the difference” research firm IDC claims, with its 68.2-percent marketshare in Q2 2012 more than seven times that of Samsung.

In fact, no other individual tablet manufacturer has broken the double-digit marketshare point, IDC’s figures suggest, with Samsung in distant second place with 9.6-percent in the last quarter. “The vast majority of consumers continue to favor the iPad over competitors,” IDC concludes, “and Apple is seeing increasingly strong interest in the device from vertical markets—especially education.”

Nonetheless, Apple isn’t the only firm to see sterling slate shipment surges. Samsung grew 117.6-percent year-on-year, while ASUS followed shortly behind with 115.5-percent growth (though still ended the quarter with a mere 3.4-percent of the tablet market. Acer ditched 2.7-percent of its total marketshare, however.

However, the second half of the year could see things get a whole lot more interesting. Microsoft’s new version of Windows is expected to bring a gush of fresh tablets, while Apple and Amazon are each expected to launch new models as well.

“In addition to major new products from Amazon and quite likely Apple, we can also expect an influx of Microsoft Windows 8 and Windows RT-based tablets starting in late October,” IDC’s Bob O’Donnell said in a statement, warning that “there’s a real risk that people will have too many options from which to choose this holiday season.”

That surfeit of choice may end up working in Apple’s favor, O’Donnell argues, as overwhelmed would-be tableteers give up on trying to figure out which model is best and simply opt for the one most people have. “Consumers baffled by the differences between Amazon and Google versions of Android, or Windows 8 and Windows RT, may well default to market leader Apple” the analyst says, “or they may simply choose to remain on the sideline for another cycle.” 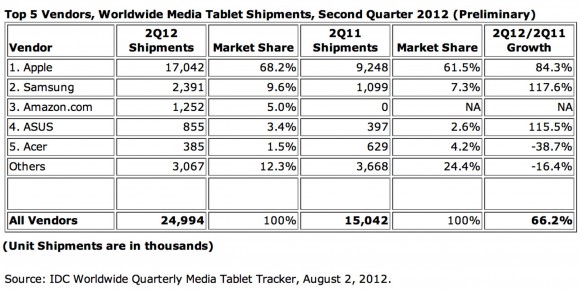