iPhone users need not feel alone anymore. A new bug affecting Skype was just discovered that also crashed the app once a specific string has been received. And no, it isn’t even something as exotic as a string of Unicode characters. A very simple “http://:” message, without the quotes, is enough to bring down the Skype app on multiple platforms, including desktops. What’s worse, however, is that once that happens, the app crashes repeatedly even when just starting it, rendering the app utterly unusable until a fix is issued.

The iOS Messages bug might have been more understandable and forgivable since it involves Unicode, which isn’t exactly that easy to implement perfectly. But checking against a malformed URL like “http://:” is something so basic that it boggles the mind how this pesky bug got through QA. And yet, here it is, ready to take down any Skype user who might be the victim of a prankster (who you should probably remove from your contact list afterwards).

For what it’s worth, there seems to be some voodoo involved in which platforms and apps get affected. Sending to or from Skype for Windows is enough to crash the Windows client. Sending the message from Android or iOS doesn’t crash the mobile apps but receiving the message on mobile platforms will. In all instances, the Mac version remains unscathed. 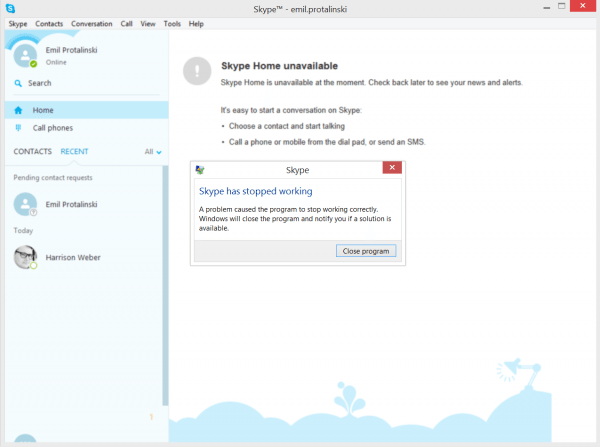 To make matters worse, once an app has been “infected” by that message, it will go into an endless loop of crashes when you start it up. Clearing the message history won’t have any effect, as Skype will try to download the messages from its archives again, causing the bug to reappear. Curiously, signing in from mobile doesn’t crash the mobile apps, even if the account does have the malformed URL.

Skype says it is aware of the bug and is working on a solution, which it better roll out quick, considering how Skype is still in use in very serious work these days.