iOS 7 update promoted by NYPD with flyers: security the key

If you’re walking around New York City this afternoon, you may be handed a flyer by the NYC Police Department with a “Public Awareness Notice” for so-called “Apple users”. This note informs users of iPhone and iPad devices that upgrading to iOS 7 will add security features that will keep these devices from being reprogrammed without an Apple ID and Password. These notes go on to suggest that “additional information on iOS 7 features” can be found at Apple’s homepage.

The feature these notes speak of is indeed included with iOS 7 (see: Activation Lock), added by Apple to help cut down the turnover rate of stolen or otherwise lost phones to thieves. The notes handed out by the NYC Police Department also suggest that users register their devices with the NYPD’s Operation Identification Program. This program is outlined by NYC.GOV in their Crime Prevention program listing as follows:

Operation Identification is offered free of charge by the New York City Police Department. The program involves engraving an identifiable serial number with the letters N.Y.C. on all portable valuables such as computers, fax machines, copiers, etc. and registering only the number and the owners name and address with the Police Department.

This program can be implemented by contacting your local Precinct’s Crime Prevention Officer. The officer will loan you an engraver, which is used to mark all equipment. Benefits from this program include:

• Special New York City Police Department decals are issued which are affixed to windows alerting people that all property contained within, has been registered in this program.
• The marked property is more difficult for a thief to sell.
• Stolen property in the possession of a thief is easily traceable to its rightful owner.
• Found property can easily be identified and returned to the rightful owner.

It is not clear at this time if these flyers are being handed out across the 5 boroughs or if they’re being distributed in centralized locations. Several flyers have popped up with “72nd Precinct” printed on them while others show no such specific marking. According to 9to5mac, flyers are being handed out at Apple Stores “where people are walking out with new iPhone 5s/5c with iOS 7 installed” as well. Twitter users Tam Nguyen and Michael Hoffman began mentioning these “uniformed NYPD officers” handing out flyers as early as yesterday. 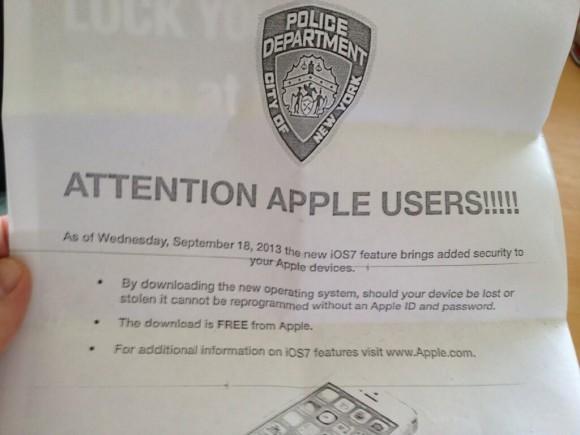 Nguyen stated that the NYPD was at more than one Apple store handing out flyers while Hoffman suggested “four uniformed NYPD officers” were standing at a subway stop closer to 6:30PM handing out the flyer you see in this article with 72nd Precinct printed on top and down below. The shorter flyer comes from Jim Rosenberg who sends message from what AllThingsD suggests was a subway station on 168th St. in Manhattan. 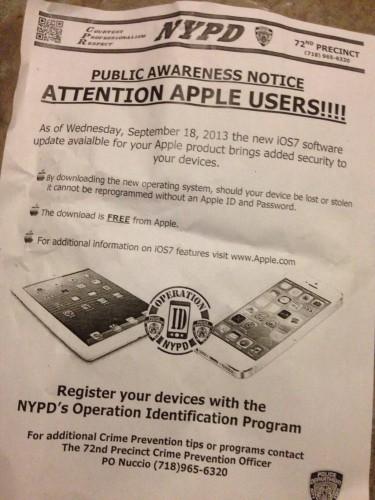 You’ll also find such programs in NYC like Park Slope Parents promoting the upgrade to iOS 7. They’ve posted a message back on the 19th of September (one day after iOS 7 was released) which read as follows:

Jerry, Community Affairs Officer from the 78th asked that we pass this on to folks:

As of September 18, 2013 the new iOS7 feature brings added security to your Apple Devices. By downloading the new operating system if your device is lost or stole it cannot be reprogrammed without an Apple ID and password. The download is free from Apple. For additional safety features and information contact www.apple.com”

While it would appear that no formal message has been issued by the NYPD on this matter online, we expect that a street-level distribution was seen as having more potential. For more information on iOS 7 in general, you’ll want to head to SlashGear’s full iOS 7 review, and if you’ve suddenly found yourself with downloader’s remorse, there’s always the iOS 7 downgrade back to iOS 6.