The second beta for iOS 7 was just released last week, but iOS hackers are undoubtedly working around the clock to jailbreak the new version of iOS, and it seems like it has been accomplished as one famous iOS hacker as posted a screenshot of what appears to be a jailbroken version of iOS 7, complete with a warning when launching the Activator plugin.

The iOS hacker, Ryan Petrich, posted the screenshot to his Twitter account, addressing the warning with sarcastic confusion about the iOS version being “too new” to run Activator, meaning that some features may not work as designed. Of course, Petrich is in charge of Activator, so we’re guessing he can easily fix this, but the screenshot goes to show that iOS 7 looks to be jailbroken already.

Of course, Petrich didn’t directly bring up the topic of jailbreaking, but only showed his iOS 7-ified iPod Touch with Activator installed, which is only possible on a jailbroken device. Obviously, though, it appears that Activator (as well as other jailbreak tweaks) still need a lot of work before a public jailbreak becomes available. 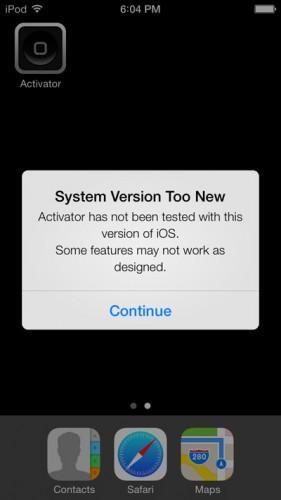 However, it’s more than likely that iOS hackers will hold off on releasing an iOS 7 jailbreak until the final version is released to the public come later this fall, that way the hacks will be kept secret from Apple to prevent the Cupertino-based company from patching up the jailbreak before the final version is even released. As of now, it looks like iOS hackers have discontinued support for iOS 6, meaning that the latest version (iOS 6.1.3) isn’t jailbreakable. This means we’ll have to wait until iOS 7 to get the latest iOS version jailbroken.