DJing apps on the iPad are cool and all, but the touchscreen controls leave something to be desired. However, Ion Audio has launched a set of physical controls, such as knobs, turntables, and sliders, specifically for DJ apps on the touchscreen tablet, and it makes the experience way more tactile and realistic.

The company has come up with a small set of suction cup-equipped accessories that turn the iPad itself into a pair of decks and a mixer on the cheap. The unit that we took a look at consists of a slider control, two round discs for scratching, and two banks of three knobs each for all the fine tuning.

The suction cups feel pretty solid. Underneath, the spinners have what looks to be like the tip of a touchscreen stylus. It’s certainly nothing fancy, but it works. I ended up playing around with the knobs and controls, essentially proving to myself why I would be a terrible DJ, but they were fun to use, and were way more handy than just using the flat touchscreen. 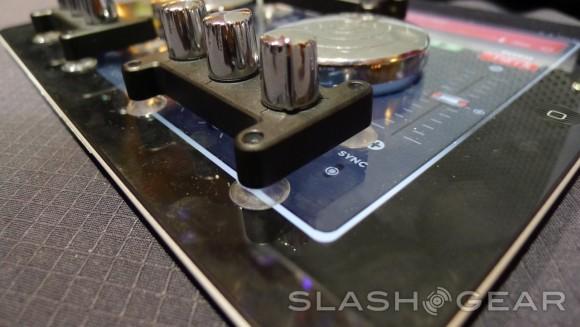 Serious turntablists will probably want to steer clear, since it would be best to get an actual deck and mixer, but for those just wanting to have fun and need a little more tactile control, you may want to check these out. They work with a variety of DJ apps, such as Djay, Deej, and iDJ2GO. Ion Audio will sell the kit for only $40 starting in May.