We may have been looking to MIX10 for its juicy Windows Phone 7 series tidbits – and have you seen our demo videos of the latest apps and functionality? – but smartphones aren’t the only think Microsoft want to talk to developers about.  Today has been Internet Explorer 9‘s turn to take to the stage, with the focus on hardware-accelerated HTML5, a new JavaScript engine and Direct 2D technology.

In its current state, the new JavaScript engine vastly out-performs IE8, as you can see in the graph below.  It’s lagging behind Chrome, Safari and Opera 10.5 at the moment, but besting Firefox 3.6 (by a little, anyway), and we’re promised further improvements as they tweak the script.  Part of the way Microsoft are approaching JavaScript is to run it in a separate background thread from the main browser, even on a separate CPU core if available.  That takes better advantage of multi-core processors, a decent idea given many people spend most of the time in their browsers these days. 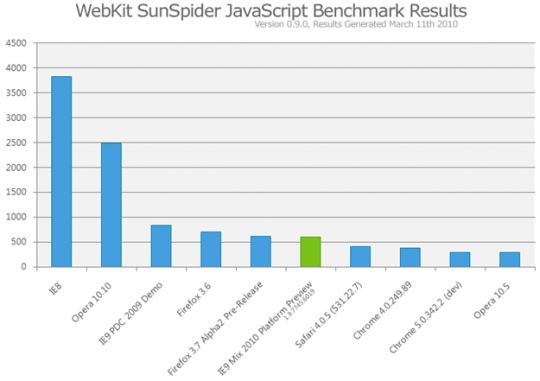 Now, this isn’t a full release of the new IE9 today, it’s the company’s “Platform Preview”, but there are still a few downloads you can try out if you’re developer-minded.  The IEBlog has several links, and they’re also promising to update the preview every eight weeks in the run up to the Release Client.  In fact, they’re being particularly honest about the current shortcomings of the latest build, which passes 55 out of 100 tests in benchmarking tool Acid3 (which tests for compliance with browser standards).  You can find the new Platform Preview build here.

LAS VEGAS — March 16, 2010 — Industry standards and innovation took center stage at MIX10, as Microsoft Corp. made a series of announcements that underscore the company’s commitment to interoperability and performance on the Web. Dean Hachamovitch, general manager of Internet Explorer at Microsoft, unveiled the Internet Explorer 9 Platform Preview including expanded support for HTML5, hardware-accelerated graphics and text, and a new JavaScript engine. Together these allow developers to use the same markup and deliver graphically and functionally rich Web applications that take advantage of modern PC hardware through a modern operating system.

Microsoft also announced that it will contribute to the development of new features and enhancements in the jQuery JavaScript Library and shared the release of new software development kits (SDKs) for the Open Data Protocol (OData) that make it easier for developers to access data from the cloud to create more compelling cross-platform Web applications.

As part of its commitment to interoperability, Microsoft detailed its support for a number of HTML5 specifications, including CSS3, Scalable Vector Graphics (SVG), XHTML parsing, and the video and audio tags using industry-standard (H.264/MPEG4 and MP3/AAC) codecs, among others. In addition, Microsoft demonstrated a new JavaScript engine that uses the multiple cores of today’s modern chips to effectively manage computing resources and improve Web performance. By combining increased interoperability with a new JavaScript engine and Direct 2D technology, Internet Explorer 9 enables Web developers to provide users with richer experiences that render more quickly and consistently.

“I am very happy with Microsoft’s commitment to the HTML Working Group and to HTML5,” said Philippe Le Hegaret, W3C, Domain Leader.

“Internet Explorer 9 is the first browser to take standard Web patterns that developers use and run them better on modern PCs through Windows,” Hachamovitch said.

Increased Support of Client Development Through the jQuery JavaScript Library

To enable developers to build immersive, cross-platform Web and mobile applications that use data delivered from the cloud, Microsoft also released SDKs for OData, an HTTP and Atom-based approach to data portability, for a number of languages and platforms including .NET, Java, PHP, Objective-C (iPhone and Mac) and JavaScript. In addition, Microsoft announced the second Community Technology Preview (CTP) of Microsoft code-named “Dallas,” an information marketplace powered by the Windows Azure platform, which provides developers with access to third-party datasets that can be consumed by Web and mobile applications. By making content and data available with an OData feed via “Dallas,” developers can access and monetize their data under their terms and pricing, which can be can built into applications to deliver unique user experiences.

Today, developers can take advantage of more than 30 datasets from content providers, including NAVTEQ, Pitney Bowes Business Insight, Weather Central and Zillow.com, available on the “Dallas” information marketplace. Developers can access the OData SDK at http://www.odata.org and download “Dallas” CTP2 at http://www.Microsoft.com/Dallas.

The latest news from MIX10 is available at http://live.visitmix.com/press.