Intel is set to toss some new processors out into the market early in 2012. A new roadmap leak has shown that in Q2 2012 Intel will launch the Core i 3000 series processors. The specific month pegged for the launch is April. Previously the chips had been pegged for a March or April launch. The Core i 3000 family of processors will be the first to hit the market using 22nm transistors. 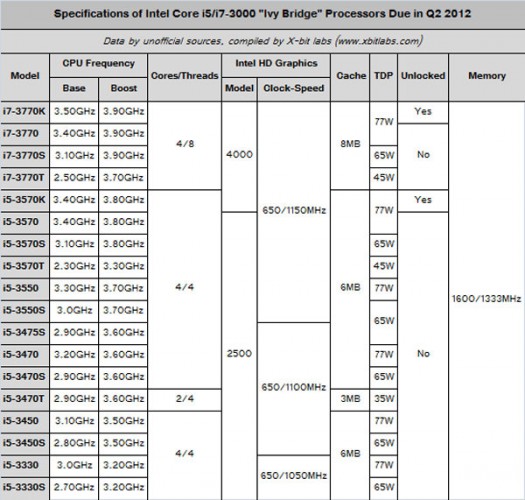 A full chart showing the specs for the Ivy Bridge parts was also shown. The fastest part on the chart is the i7-3770K clocking in at 3.5GHz and 3.9GHz on boost with four cores. The slowest part is the i5-3330S with 2.7GHz base and 3.2GHz on boost. There are bunches of quad and dual core parts in between. These chips are said to inherit a modified Sandy Bridge micro-architecture with a bunch of improvements.