Intel has kicked off its Intel Developer Forum (IDF) 2010 today, and they’ve wasted no time in detailing the 2011 range of Core processors we have to look forward to.  The second generation chips – based on Sandy Bridge technology – will go into production later in 2010 and begin showing up in computers early in 2011.

In the desktop processor range there’ll be 65W, 45W and 35W TDP Performance Optimized and Power Optimized options, together with low-power versions including performance- optimized 65W chips and 45W/35W power-optimized chips.  Intel will be offering these low-power processors with a new, low-profile fan heat sink, as well as with a Mini-ITX desktop board for all-in-one system builders. 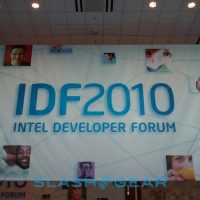 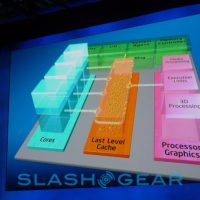 Intel detailed several new and improved features for its upcoming 2nd Generation Intel® Core™ processor family for laptops and PCs. This will be Intel’s latest processor, with a rich visual experience built-in.
Expected to be in production later this year with new laptops and PCs available starting in early 2011.
Chips will further expand Intel’s battery life and performance leadership.
First public demonstrations of Intel’s next-generation Xeon™ server platforms, for both dual and multi-processing servers.

Codenamed “Sandy Bridge,” the chips will be based on Intel’s first new “visibly smart” microarchitecture produced on the company’s cutting-edge manufacturing factories, or “fabs,” at 32-nanometer (nm is a billionth of a meter) process technology with second- generation high-k metal gate transistors.

“The way people and businesses are using computers is evolving at an explosive rate, fueling demand for an even more powerful and visually appealing experience,” said Dadi Perlmutter, executive vice president and general manager of the Intel Architecture Group. “Our upcoming 2nd Generation Intel Core processor family represents the biggest advance in computing performance and capabilities over any previous generation. In addition to offering these features inside Intel-based laptops, we plan to scale these advances across our server data center and embedded computing product portfolio.”

The processor family will include a new “ring” architecture that allows the built-in processor graphics engine to share resources such as cache, or a memory reservoir, with the processor’s core to increase a device’s computing and graphics performance while maintaining energy efficiency.

Laptops and PCs powered by the 2nd Generation Intel Core processor family are expected to be available early next year.

Intel also demonstrated a dual processor, next-generation Intel® Xeon® processor server running Vidyo* video conferencing software that utilizes the 32 threads available on the system, and takes advantage of the AES New Instructions set (AESNI). Next-generation Xeon™ processors for 2 socket servers and workstations run 8 cores and 16 threads per processor and are on schedule for production in the second half of 2011.

For more information on the Intel Developer Forum 2010, visit the press kit at www.intel.com/newsroom/idf