Apple may have made the iPad a sales success, but Intel reckons it made the IPAD first. The Intel PAD (known internally as “IPAD”), the company tongue-in-cheek suggests, was an ARM-based touchscreen slate for browsing and media playback, and predated the iPad all the way back in 2001. Now, before you hit Page Down and start screaming in the comments, Intel isn’t really trying to take the credit for tablets; instead, it’s an interesting look at the background, research and decisions around the Intel Web Tablet, and the reasons it failed to reach the market. 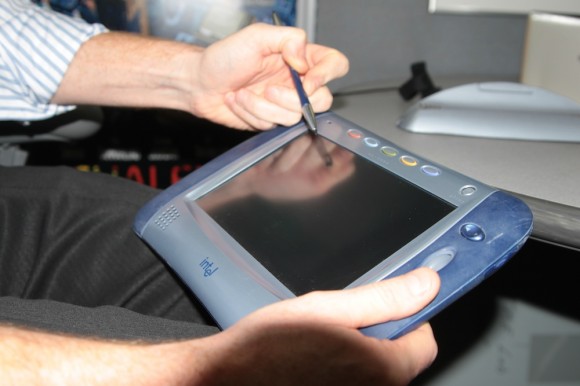 Shown as a mock-up at CES 2001, according to team members on the project the Web Tablet was produced, boxed and ready for retail when Intel management axed the slate. “We were at the beach celebrating, the trucks were rolling,” David Andersen recalls, “Circuit City was signed up to sell them, there was even an ad that ran in the New York Times, but not a single one of the tablets ever made it to stores.”

Pressure from Intel’s OEM customers and a $500+ price tag scuppered the Web Tablet in the end, though a second-gen version was already in the works which should have reduced that figure. Intel’s consumer products division – which was working with Mattel on connected toys, and also produced digital cameras and peripherals – “lost a major cadre of very talented software people” device engineer David Cobbley suggests.