Get ready to look out for a new logo when you’re next buying a laptop, with Intel unveiling not only new branding of its own but an “Intel Evo” badge to signify what it thinks is best-in-breed. Launching alongside the 11th Gen Intel Core processors, Intel Evo will be showing up on more than 20 laptop designs this year, the chip-maker says.

As for what you can expect in practice, it’ll mean laptops which load up faster, perform more consistently whether on battery or mains power, and deliver enough battery life to get through a full, real-world work day. For example, if a notebook wants the Intel Evo badge, it’ll need to wake from sleep in under 1 second. It’ll also need to get 9 or more hours of real-world battery life, if it has a Full HD display.

A 30 minute charge, meanwhile, needs to deliver enough battery for 4+ hours of battery life, again on machines with a Full HD screen. Intel is mandating “responsiveness on battery,” too.

When it comes down to the nitty-gritty, Intel Evo branded notebooks will all have Core i5 or i7 processors. They’ll all use Intel Iris Xe graphics, and have WiFi 6 (Gig+) and Thunderbolt 4.

They’ll run Windows 10 or Chrome OS, and have at least 8GB of dual-channel memory and at least 256GB of PCIe/NVMe SSD storage. There’ll need to be some sort of biometric login supported, whether a fingerprint sensor or facial recognition on the notebook itself, or phone proximity via Bluetooth. Connectivity will include USB Type-C – which must also support fast charging – while Intel LTE or 5G will be optional. 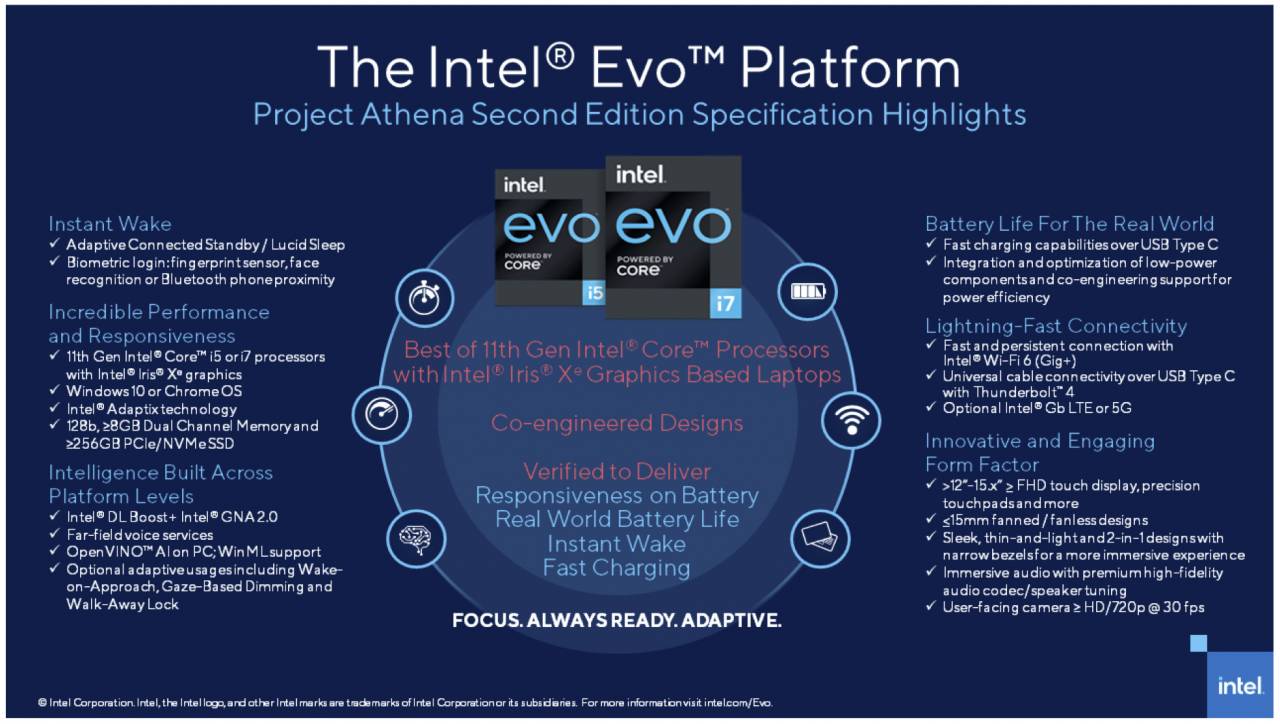 As for the form-factor, expect between a 12-inch and 15.x-inch display, at least Full HD in resolution, with touch. There’ll also be a precision touchpad. Intel Evo machines can be thin-and-light notebooks, or 2-in-1 designs, and can be fanned or fanless, but either way they need to 15mm or less in thickness when closed.

For the second-edition of Project Athena, Intel added more real-world relevant tests that manufacturers need to satisfy. That includes things like having multiple cloud-based accounts logged in, while their companion apps also run, such as Zoom, Spotify, and Twitter. As such, it bumped up the workload testing from 15 tasks to 25.

The first Intel Evo badged notebooks are expected to go on sale this year. There’ll be models from Acer, ASUS, Lenovo, and Samsung, among others.