Hardly had our liveblog finished when Apple sprung the second half of their iPhone 4 antenna event, the “show” companion to Steve Jobs’ presentation “tell”. SlashGear was among eleven journalists and analysts – both print and online – to be taken around the company’s wireless lab, formerly one of the best kept secrets on the Cupertino campus, and now a multi-million test facility featuring custom hardware, fake brains and kit that wouldn’t look out of place in a sci-fi film. Read on for full details of our tour.

Apple wasn’t joking when it said the lab was secret; our tour marked the first time a group of outsiders were allowed through the doors, and even the company’s employees generally can’t get a glimpse inside. Our guide for the morning was Ruben Caballero, one of Apple’s senior wireless engineers and the subject of the Bloomberg antenna warning “leak” which Jobs bluntly described as “total bullshit” during his keynote. According to Caballero, the test facility is unique by virtue of its full sixteen anechoic chambers, each costing around $1.2m. They’re staffed by forty engineers, physicists, electromagnetic specialists and other experts, between them holding a few walls’ worth of PhD certificates.

That uniqueness – and the presence of multiple black cloth-clad prototypes – meant we weren’t allowed to shoot video or photos; the images you see here are from Apple’s own stock. Meanwhile the complexity (and expense) stems from the sheer amount of wireless connectivity companies are now packing into their devices, each demanding their own testing and tweaking. The “black labs” are the first step to eventual wireless certification, and while that final stage is the responsibility of third-parties like the FCC, there’s a whole lot of work to be done before a device like the iPhone 4 is ready for external consideration.

With each anechoic chamber responsible for testing a different aspect of wireless performance, each differs in some unusual and distinct way. From an initial concept design, Apple starts with passive testing with radios simply slotted into hardware mock-ups – “junk in the trunk” as Caballero put it – as the prototypes are refined. Initially the testing is passive, that is, the device is isolated in a “dead” space and its performance tested from every angle. No small part of the expense involved with each chamber is in isolating it from wireless interference. Walls, ceiling and floor are bristling with foam spikes and ridges, carefully designed to make them radio-neutral. The Euroshield doors are similarly complex, ensuring no external signals get in and nothing inside the room escapes detection. 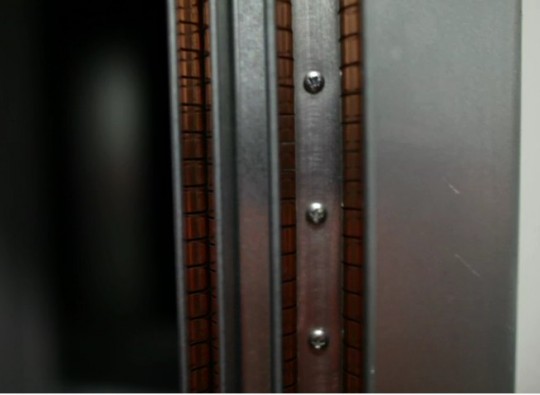 The first test setup we observed, an iPad suspended in a long, tapering room, was described as establishing the baseline performance: what Apple can expect from the iPad in a perfectly neutral environment. Slowly rotating the full 360-degrees, in a process that can take in excess of 24 hours, in this specific setup the lower frequencies were being monitored; different bands are handled by different chambers. As for why the iPad – a shipping product – was still begin tested, Caballero said Apple is constantly looking to monitor and improve performance. Passive testing is followed by active measurements, the device on a Styrofoam pedestal and examined in different chambers with various combination of radios turned on to see how they co-exist; each individual test can take up to eight hours. 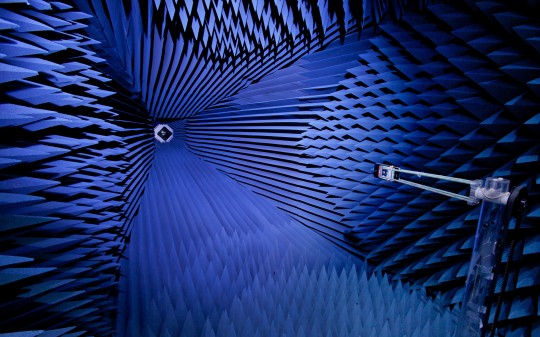 As for the results, we obviously lack the engineering background to understand them fully, but Apple basically ends up with a 3D plot of the performance. Somewhat ironically the testing software runs in Windows XP, though Apple do use Macs to run the Microsoft OS. Designs and prototypes get refined and retested; Caballero told us the iPhone 4 was in testing for two years altogether before its launch. 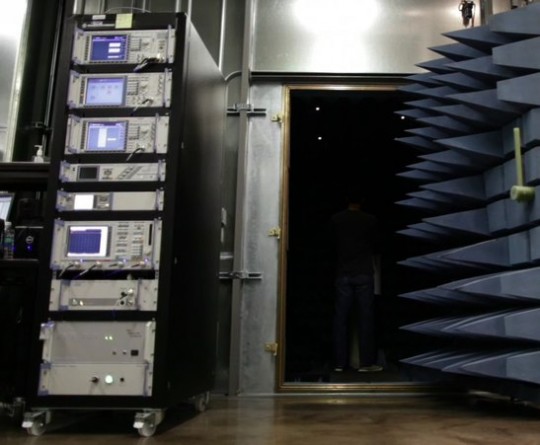 After isolated passive and active measurement comes the attempts to balance real-world style use – with people actually touching, holding and generally using the devices – with the rigors of standardized testing. Both real employees and artificial body parts are used; we were shown a chamber engineers have nicknamed the Stargate, a huge loop packed with “multiprobe” sensors made by SATIMO. The employee sits in a rotating chair, holds the device – in this case an iPhone – as if using it, and then the potential interference from their body can be measured. What Caballero wouldn’t tell us is exactly how long this sort of testing goes on, beyond the general two year process for the iPhone 4. 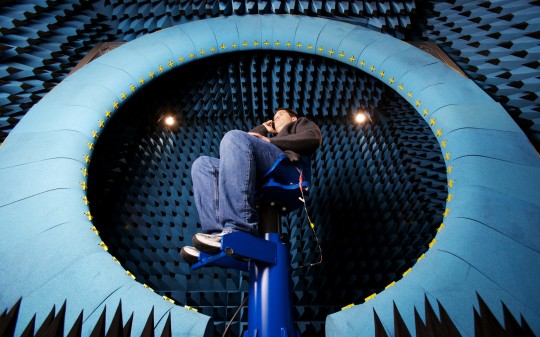 In a different lab, the Apple employee was put aside in favor of an array of artificial parts: special test heads filled with a custom mush that mimics the wave-mangling effect of a human brain. With the iPhone strapped in place, it’s back into the test chambers for a further cycle through the measurements. There are also a fair few artificial, foam hands made for Apple by CTIA – there are no standardized specifications for their design – which basically are used in the same way, attempting to pin down real-world use in a way that’s compatible with replicable tests. 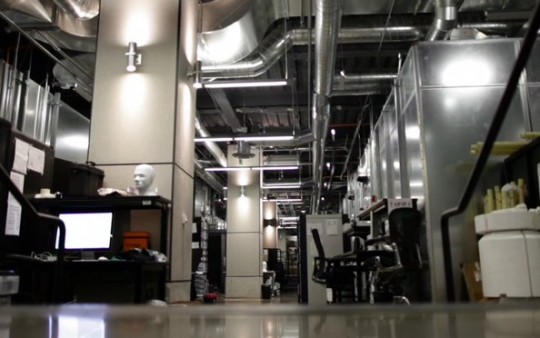 It’s not only hands that Apple has commissioned; they also have a $20,000 artificial foot, studded with sensors underneath, that’s used to test the Cupertino company’s collaboration with Nike on the Nike+ exercise system. Apple even brought in grass to test its potential impact on wireless performance, attempting to replicate likely usage scenarios of the end product. A CT scanner, meanwhile, is used for non-intrusive examination of defective products – we were shown a 3D scan of an iPhone 4, which we thought would make a pretty good wallpaper for the smartphone – since, Caballero explained, merely opening up the chassis could impact a device’s electromagnetic performance and thus mask the true issue.

Finally, rather than carrying out all their testing on-site, Apple can take their prototypes out for field testing. A fleet of field validation vans – with suitably tinted windows to keep out prying eyes – can carry employees or artificial heads and hands, tracking wireless performance against GPS-pinpointed location. That data is then compared with what has come out of the chambers back at the lab.

You can’t accuse Apple of falling short when it comes to their investment – in terms of finance and time – in wireless testing. There’s a whole lot of precision equipment being used by a team of obviously skilled people, the same people we presume that were “working [their] butts off” in the 22 days since the iPhone 4’s release to get to grips with the antenna complaints. As Apple senior VP Bob Mansfield told us near the end of the tour, “there’s real engineering going on here”, and it’s that engineering investment that helps the company “make great products”.

In the end, something Steve Jobs said during his presentation stands out as perhaps the key take-away point. “X marks the spot” the slide said, Jobs adding that Apple made the antenna join point “very visible”. “Here’s where you touch it, everybody!” he laughed, and indeed a purposeful or accidental touch to the black line will make its mark on your signal strength. Apple is being upfront about the iPhone 4’s imperfections, they’ve showed us the exhaustive nature of their testing, and they’re offering a solution and a get-out clause for those dissatisfied all the same. If you still can’t live with it, then don’t buy it; just don’t presume it’s all down to shortcomings on the part of Apple’s engineers.