A production version of a new hypercar has been unveiled by a company called Devel Motors and the car is insane. The debut of the wild ride was at the Dubai Motor Show and the car uses a quad turbo V16 engine that makes 5,000 horsepower. OMG.

The automaker behind the car says that it will reach speeds of about 310 mph when it goes into production. That is plenty of speed to beat the Koenigsegg Agera RS and the 277 mph record it just set for the fastest production car. The massive engine (which can be seen in the video below) uses four 81-mm turbos and displaces 12.3 liters. 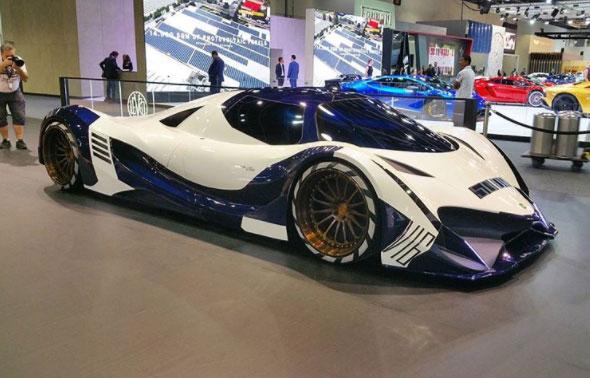 It looks like something that would be under the cowling of a WWII fighter plane rather than under the hood of a car. The catch for the Devel Sixteen is that the car will not be street legal, which takes a bit of wind out of its sails.

Devel Motors says that the car is “more of a dragster” with the full 5000hp underfoot. Road versions of the car will use a 2,000hp V8 with one version using a V16 quad turbo engine making 3,000hp.

Those road versions will cost $1.6 million for the V8 flavor and $1.8 million for the V16 version. There are no plans to limit the number built. The automaker says that the car and testing will be completed in the next 12 to 18 months.