Farts aren’t to be trusted, anyone can tell you that. When you think they will be quiet, they are loud. When you think they will be scent free they are eye-watering. Never trust them. A group of Australian scientists are doing the world a favor and trying to help improve the science of fart prediction (that’s not actually what they are doing, but it’s a nice offshoot of the real science). This is potentially just as important as predicting earthquakes and tornadoes to mankind.

The researchers have created an ingestible electronic capsule that monitors gas levels in the human gut. The pill is paired with a receiver that fits in a pocket and an app on your smartphone. As the pill moves from the stomach to the colon to Uranus, it reports on conditions therein.

The scientists say that the capsule can help gain insight into the workings of our bodies. Data like what microbes are doing in each section of the gut and what foods cause issues in the digestive system is important to overall health. Testing of gaseous emissions previously required catching and bottling the flatulence (sounds like a crappy job) for testing or whole-body calorimetry.

Simply swallowing the pill is a major improvement over previous methods of testing. The pill is in human trials now and has given new information the human body. The researchers said, “Our pilot trial illustrated the significant potential role for electronic-based gas-sensing capsules in understanding functional aspects of the intestine and its microbiota in health and in response to dietary changes.”

The pill is 26mm in length and 9.8mm in diameter. Inside the polymer shell are sensors for temperature, CO2, H2, and O2. It takes about 20 hours for the pill to go from ingestion to splashdown in some cases. In low fiber cases, it took longer. We sincerely hope the pills are single use, but that isn’t clear. 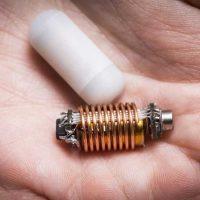 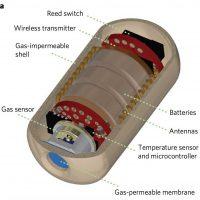 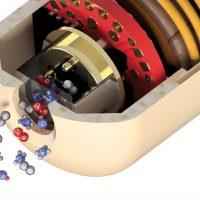