This year marks the 30th anniversary for Infiniti, the luxury division of Japan’s Nissan Motor Corporation. It’s celebrating the occasion with the release of the special Edition 30 vehicles, that include the Q50, Q60, QX50, QX60, and QX80, unveiled at the Infiniti Pavilion during this year’s prestigious Pebble Beach Concours d’Elegance.

Pebble Beach has traditionally been an event that celebrates the history of the automobile, but increasingly it’s just as important as a place where automakers unveil their latest concepts. Infiniti’s new Edition 30 lineup bucks that trend too: its new versions of the Q50, Q60, QX50, QX60, and QX80, each with driver assistance technologies pioneered by the company and exclusive exterior design treatments, will in fact be headed to dealerships. 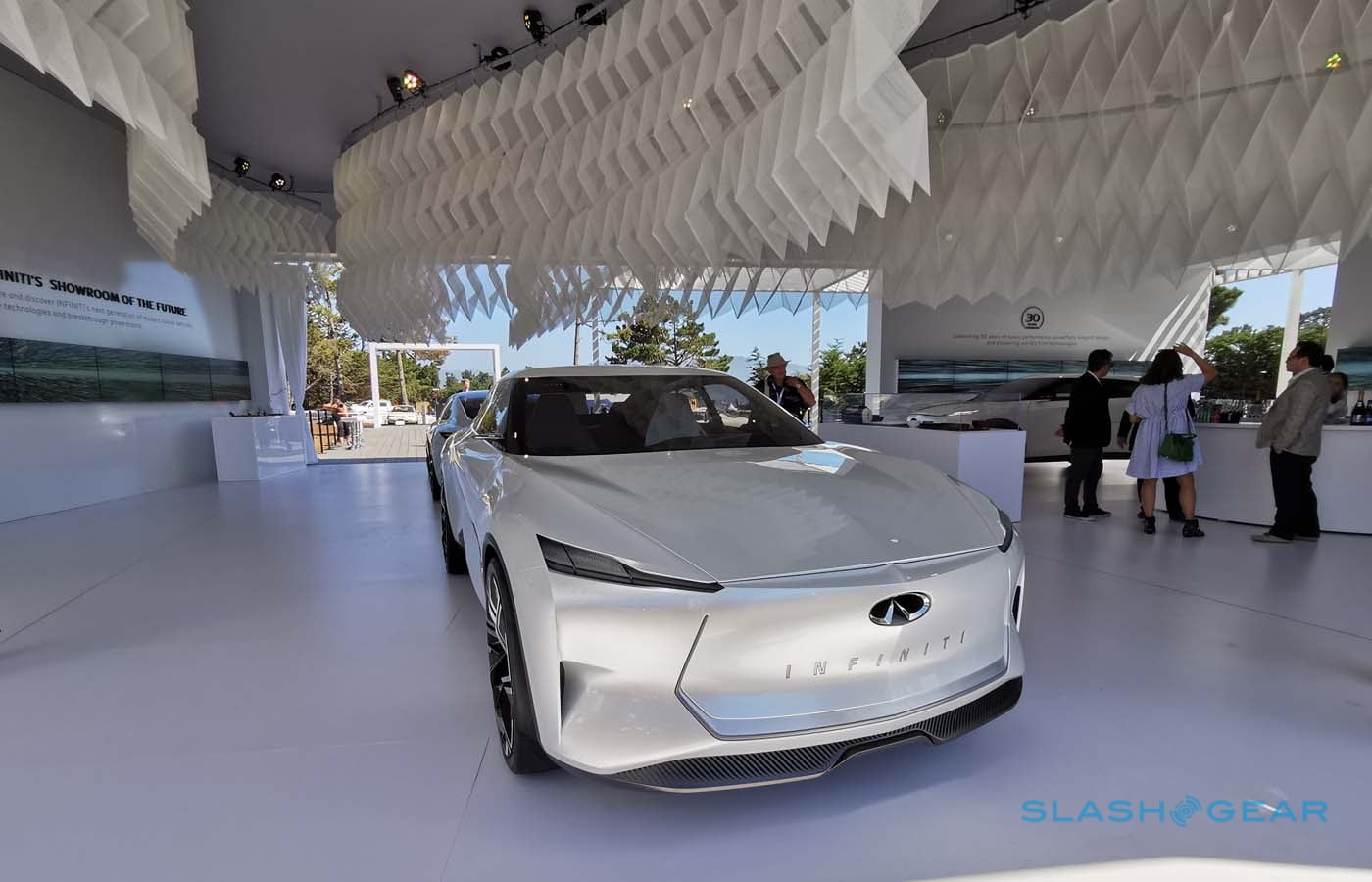 That’s not to say the automaker skimped on exotica. Infiniti also used the moment to showcase its Q, Qx, and most recent Qs Inspiration concept cars. They won’t be reaching buyers like the Edition 30 range, but do give some strong hints as to the company’s evolving design language.

Past, present, and future each took on their role in Infiniti’s showcase. The Infiniti Pavilion at this year’s Concours d’Elegance was laid out in a purposeful way that paid homage to Japan’s role in automotive history, giving a nod to heritage and a number of vehicles that paved the way and contributed to the company’s current success. The JAI, Japanese Automotive Invitational, was presented by Infiniti, and the organization of the entire scene and Pavilion gave the Edition 30 group a historically rich contextual setting, in line conceptually with the greater Pebble Beach event. 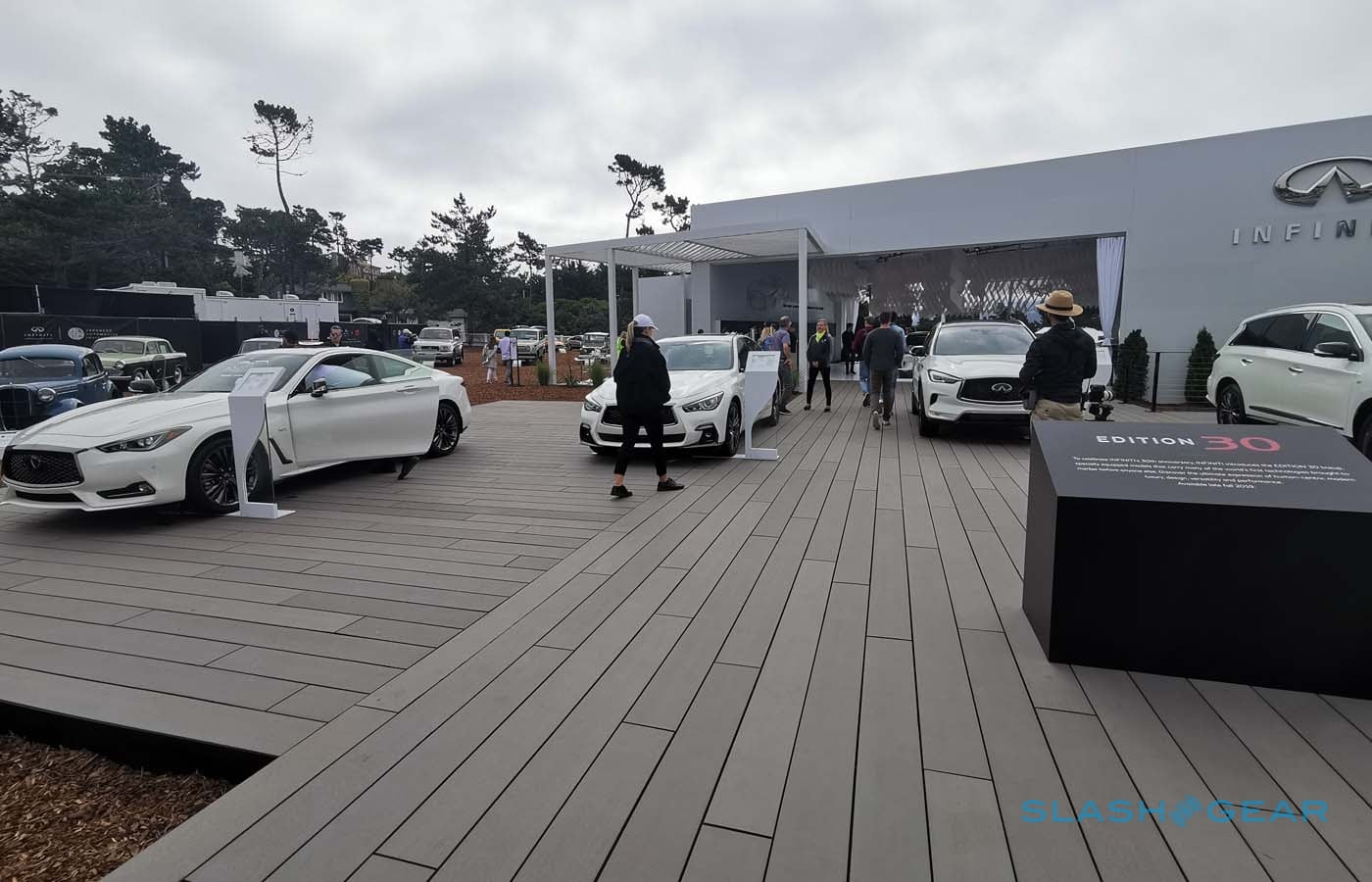 The Edition 30 vehicles tie together, in effect, the past and present, and also have significance as a departure point for the company as it leaps forward into the age of electrification with plans for an all-electrified production fleet by 2025.

The unique arrangement of the Infiniti Pavilion was intelligent, and highlighted the significance of Japanese car culture and the company’s relevance and ability to produce high quality luxury cars in the face of an increasingly competitive automotive global market. That’s a challenge with no definite end, of course: indeed, the 30th anniversary comes as Infiniti fine-tunes its focus on the US and Chinese markets. Infiniti as an automotive brand is generally considered to be a younger one, having been founded in 1989. Certainly that’s recent, especially when compared to older and more established companies like BMW whose origins stretch back to 1916. Still, Infiniti seems to suggest the case is otherwise, and would probably like you to reconsider that thought; the perception that Infiniti lacks roots is somewhat erroneous. Its pedigree may not have been planted decades ago, but grafted onto established Nissan, which in turn had merged with the Prince Motor Company back in 1967. In fact, a handsome 1963 Prince Skyline Sport was on display front and center at the Infiniti Pavilion. 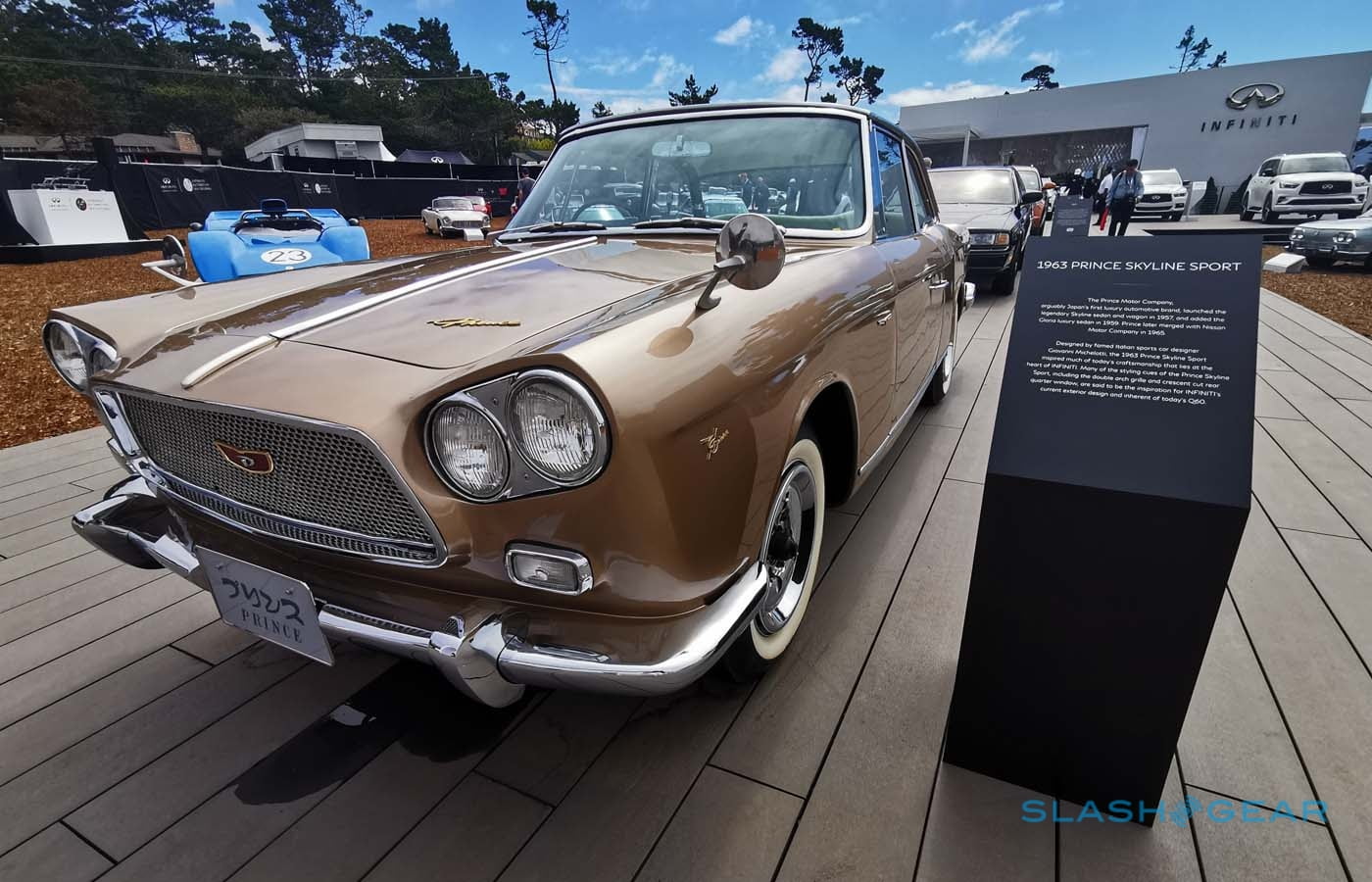 The Infiniti Edition 30 collection were arranged in hand fan-like fashion in the open space just prior to the covered portion of the Pavilion, and after the bevy of historically significant cars, but before Infiniti’s Q Inspiration series concepts. Just where you’d expect, of course, for a range intended to bridge the two eras.

The company is staying mum on the majority of specs, so while it’s not exactly clear what goodies are in store for the luxury sedans and SUVs, we did get an up-close and personal look at the exteriors. All dressed in white paint, each has contrasting dark gunmetal-like chrome on the exterior accents, the grill surround, fender trim, and the rear finisher. In addition, black side-view mirrors, body color rear apron, and dark alloy wheels give a sportier and more aggressive flavor to the Edition 30s. 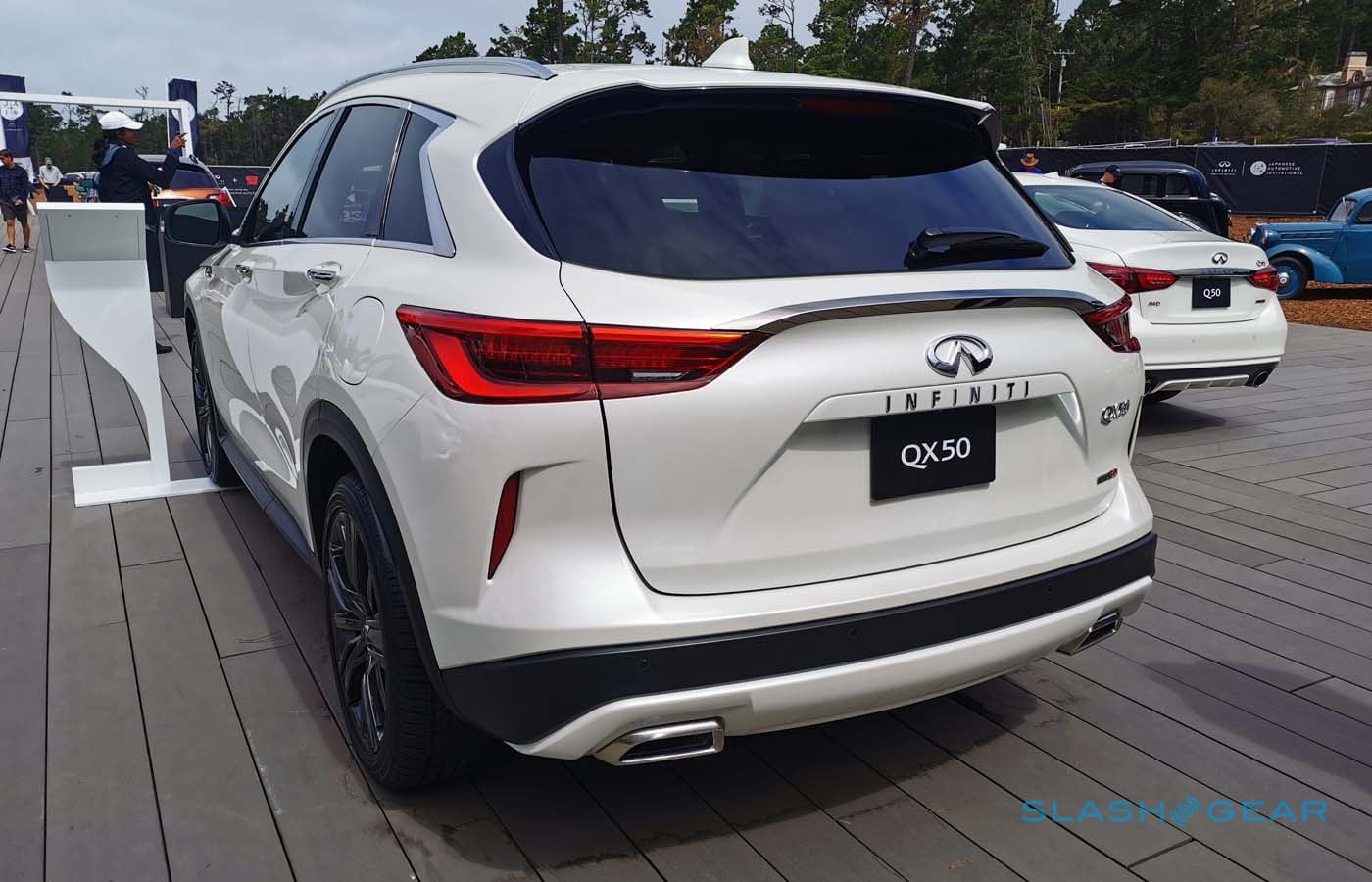 The white-washed body of the behemoth and rather suburban-like QX80 anniversary edition lends what’s undoubtedly a large SUV a surprisingly light and airy aesthetic. The blacked-out pillars around the windows, meanwhile, create the illusion of a cantilevered roof. It’s a look that gives movement to the eye and an overall balance in such a large design.

Infiniti has officially announced that the quintuple will come standard with the latest and greatest in advanced safety features and driver assistance systems that are usually offered with a ProAssist premium package. That includes the 360-degree camera system, adaptive cruise control, and automatic emergency braking, among other features. 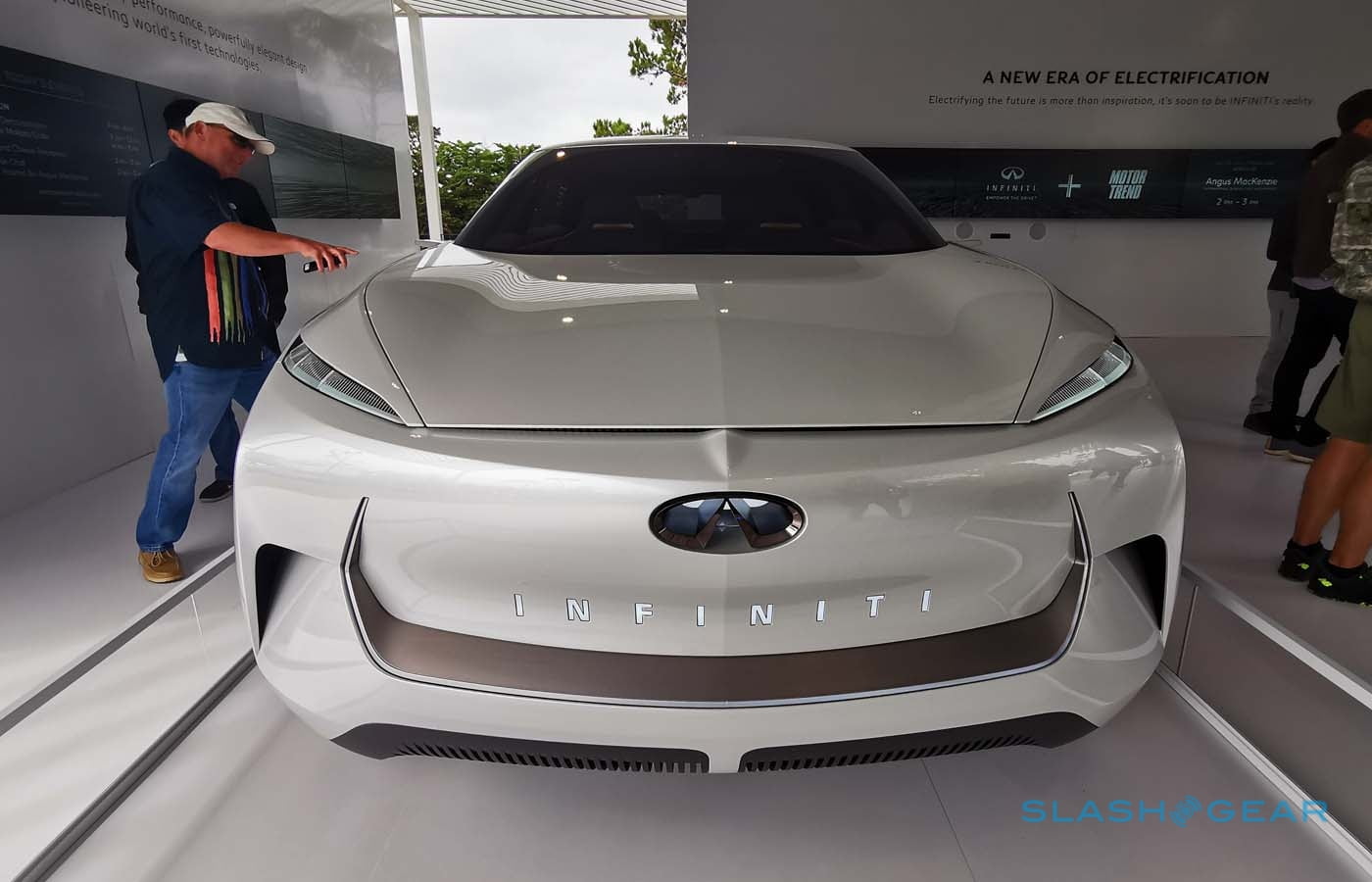 Three decades in, Infiniti finds itself poised to take its next big step forward. Its Edition 30 cars take the best of the automaker’s current range, and presents them as a showcase of what it has learned in the luxury car world so far. Next comes the challenge of translating that into the electrified age. The Infiniti Edition 30 vehicles will be delivered to retailers this fall 2019.