RM Sotheby’s is auctioning some incredibly expensive, rare, and iconic vehicles in Monterey, California, starting on August 14. One of the highlights of the show is an extremely rare and perfect 1970 Porsche 917 K racer. The car was delivered new in 1970 to Porsche Works team JW Automotive Engineering.

The car was driven by David Hobbs and Mike Hailwood in the 1970 Le Mans 24 Hours. This car is also the same vehicle used as the winning car in the Steve McQueen classic Le Mans. The vehicle was rebuilt to 917 Spyder specification at the Porsche factory in 1971. It currently wears one of the most iconic racing liveries in history with the blue and orange of Gulf.

The car was raced in Interserie in 1971 through 1973 by Jürgen Neuhaus, Team Shell Heckersbruch, and Gelo Racing. Subsequently, it was owned and raced in historic events by the late Michael Amalfitano for over 20 years. The vehicle was restored to its original 917 K specification but is accompanied by the original Spyder body.

This racing car may be decades old, but it’s incredibly fast, reaching 220 mph. The vehicle is chassis number 917-031/026 with engine number 917-031. The sale comes with numerous spare parts, additional hardware, tools, and ancillary components. The vehicle has an extensive racing pedigree with multiple drivers and multiple racing series. 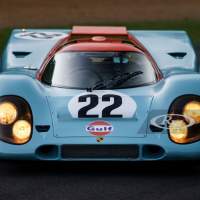 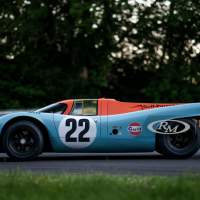 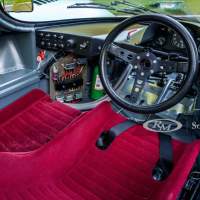 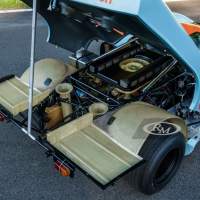 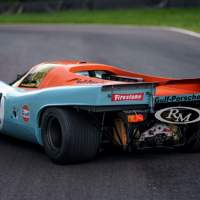 It also finished in first place in many of the events it entered. The car is rare enough, and with such an extensive racing pedigree coupled with the fact that it was used in the iconic Steve McQueen film, it’s expected to bring a huge amount of money. The action estimates the vehicle will sell for between $16 million and $18.5 million when the gavel drops.