Be careful which emojis you’re tossing around — what you’re seeing may not be what your compatriot is seeing, and that’s how sometimes-comical misunderstandings happen. Emojis on their own are great; the little expressive icons add context and flavor to otherwise bland text with little effort. The problem is the lack of consistency across platforms, and as a new study points out, some emojis lose all meaning in translation.

A study by Grouplens looked at popular emoji and how they’re rendered on different platforms, as well as how the recipient interprets them. As you have likely discovered from your own messaging sessions, emoji show up differently depending on platform, but are often similar. The “smiling” emoji on Google products is notably different from the Microsoft and Samsung “smiling” emoji, but they’re all recognizable as the same emotion.

That’s not true when comparing Google and Apple’s smiling emojis, though — while Google’s is a big sharp-cornered grin, Apple’s is more like an express of distress, possibly some sudden gastronomic issue.

As well, each smiling emoji is interpreted differently — not surprising, Google’s emoji is viewed as the most positive, with LG’s coming in at a close second followed by Samsung at third. A bit further down the chart (-5 to +5 in this case), Microsoft comes in around a +3, whereas Apple comes in all the way down at nearly a -1, meaning most people interpret it negatively.

It’s not surprising, then, that someone sending a big smiling face from their Google phone may get a concerned response from their friend on an iPhone — the friend sees a somewhat negative symbol instead of the most-positive of the positive emojis. The differences in interpretation weren’t limited to smiling faces, of course — the “raised hands” emoji were more commonly viewed as being clapping or a command to “stop,” whereas Google’s version is more often viewed as being “praise” or “hand.”

If you think a unified design palette will fix this problem, think again. The study found a great deal of varying interpretations among individuals viewing the exact same emoji — on the most extreme ends, some people can view an emoji as overwhelmingly positive and others can view the same render as overwhelmingly negative.

Emojis sent between users on different platform were found to have interpretations that differed by 2.04 points on the above scale, while those sent on the same platform were slightly less at 1.88 points. 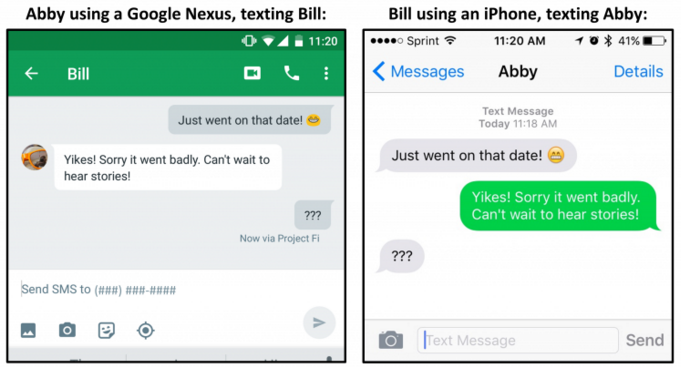