Nanovision’s MIMO range of USB companion displays are no strangers to the pages of SlashGear, and we’ve reviewed our fair share of them over the months. Standing proudly on the test bench today, though, is the company’s biggest to date, the 10-inch touchscreen iMo Mini-Monster. A titan among USB secondary displays (and a Tinkerbell among regular LCDs), the iMo Mini-Monster promises the same ease of connectivity as its smaller siblings but with the same resolution as a 10-inch netbook. Worth the $259.99, then, or has Nanovision overestimated exactly what consumers want from their companion LCDs? Check out the full SlashGear review after the cut.

Physically the iMo Mini-Monster looks a little like a basic tablet, with minimal screen bezel surrounding the 10-inch, 1024 x 600 touchscreen display. On the back there’s a hinged stand that flaps out to prop the screen up, while the ports are recessed at the side. Nanovision quote a 400:1 contrast ratio and 350cd/m2 brightness, and the whole thing measures 9.7 x 6.3 x 1 inches and weigh 1.77lbs.

As with the other MIMO displays we’ve tested, the iMo Mini-Monster relies on DisplayLink’s virtual graphics driver technology. Rather than plugging into a true video output – such as a VGA port or HDMI – the DisplayLink drivers create a virtual monitor connection and the Mini-Monster gets both power and signal over the same USB 2.0 connection. The plus side is that you don’t need another graphics card (or to use your spare video output on a sub-display); the negative is the CPU impact of doing the necessary graphics crunching.

On a desktop PC or a decent notebook, running a single MIMO display isn’t going to bring your system to a halt. However, because you can have several such displays going at the same time, each with their own virtual graphics driver, it’s possible to bring general performance noticeably down. If you’re on a low powered machine to start with, such as a netbook, the impact of the DisplayLink drivers will be even more considerable. 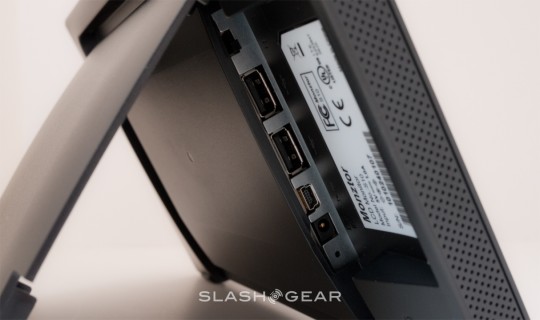 You’ll also need a USB port with sufficient power to drive the display. A double-headed USB cable (two full sized USB plugs on one end, a mini-USB plug on the other) is supplied just in case a single port isn’t enough. There are also two USB ports on the iMo Mini-Monster itself, to use it as a simple hub; Nanovision throw an AC adapter into the box to power these extra sockets. Otherwise the only feature of note is the pull-out stylus for more precise use of the touchscreen.

That touchscreen, meanwhile, is a resistive panel rather than a capacitive one, supporting a single point of contact rather than multitouch. Unlike some of Nanovision’s smaller MIMO displays, the OS X touchscreen driver (for Intel based Macs only) is freely available alongside its Windows counterpart; previous displays from the company used a proprietary OS X touchscreen driver that added a further $30 to the bill. Accuracy is reasonable but of course lacks pressure sensitivity; this isn’t the display for an artist, unless you’re content sketching out the most basic of lines.

The Mini-Monster is billed as suitable for both desktop or handheld tablet-style use, though since there’s no accelerometer or physical rotation button you’ll need to dig into the DisplayLink settings in order to flip the screen orientation around. As with other MIMO screens, it comes into its own with Photoshop toolbars, IM windows, Twitter apps and music playback controls: the things you’d like to have constant access to, but don’t want to pin on top of your regular work area. Unlike other models there’s no integrated webcam, speakers or microphone. 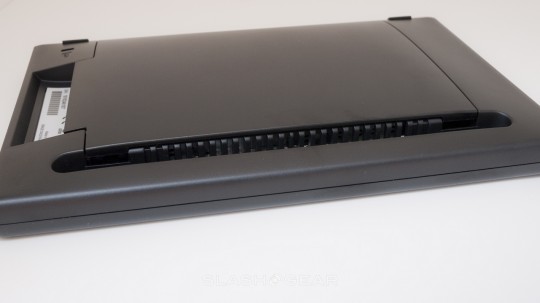 It all works as you’d expect, then, and while we’d prefer a more flexible stand (or, indeed, a VESA mount) it’s a relatively straightforward way to get extra display real-estate. Our concern, then, regards the price. At $259.99, you could certainly get a regular LCD display that’s considerably larger than the iMo Mini-Monster, or indeed a netbook with the same screen size and resolution. Now, neither of those would have the touchscreen layer, but you could easily use the netbook as a secondary display with an app like MaxiVista ($39.95).

If the touchscreen is a dealbreaker, though, and the compact dimensions of the iMo Mini-Monster a boon rather than a drawback – admittedly we’d rather not carry a full-sized LCD in our laptop bag, whereas the MIMO slots in nicely – then adding another 10-inches of screen has never been so easy. Most users will be satisfied with the regular 7-inch MIMOs – kicking off at $179.99 for a touchscreen model – but if you demand the biggest of the small screens then the MIMO iMo Mini-Monster fits the bill.