iLife 09 announced with the addition of three new ‘Events’

Today at the last MacWorld expo Phil Schiller started off with details on the newest installment of iLive, iLive 09. The first portion that was announced is the addition of more “events” in iPhoto such as Faces. This feature uses face recognition to identify people in photos and then pick that particular person out of photos in your album. You can also create an auto-corkboard of people in which you can then tag people to identify who they are. From there you can confirm the different people that Faces finds for you.

The second addition, “Places” is an advanced geo-tagging service for photos.  Places works with standalone cameras that have GPS, together with the iPhone’s camera. This service will automatically dig up GPS data on your photo and with the iPhone will provide latitude and longitude data to identify that you were near a landmark like say the Eifel Tower.

iPhoto has a vast database of thousands of well known locations. There is also integrated Facebook and Flickr support, to export all that location and person data. Also there are new themes for showing your photos with all new matching music. One amazing addition is the travel book system, which will group photos based on the location in which they were taken. iMovie also got a bit of tweaking. Users can now edit in real-time, stabilize a clip, slow it down and make it look aged.

Phil moved on to announce the new additions to GaradgeBand 09. Perhase the largest addition to the software is the new “Learn to Play” feature, which as the name implies teaches you how to play guitar in a fun and interactive way. Lessons are given with a video instructor in real HD video along with the fretboard of the guitar just below the video.  There is also a keyboard-teaching feature for those who would rather learn the keyboard. Celebrity lessons are provided by such names as John Fogerty, guitarist from Fallout Boy, Sting, Sara McLaughlin, Ryan Tedder and Norah Jones on keyboard with plenty more to be added soon. 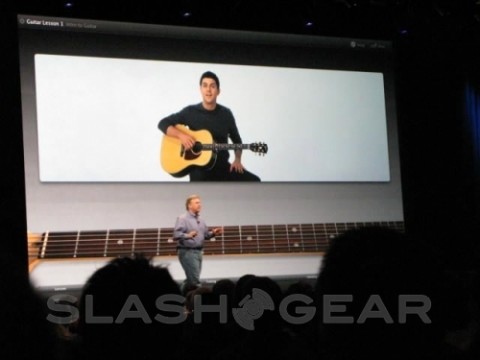 These lessons may be some of the most interactive software lessons out there. The lessons will be quite expensive so only those most dedicated will actually use them. Each lesson will be $4.99 each! For that price you can take lessons from an instructor. iLife 09 will be included on all new Macs with a release in January. Upgrading will be $79, with the family pack for $99.