IKEA “bookbook” spoof reminds us of life beyond digital

Last week’s IFA 2014 madness might have left you feeling bloated with gadgets and appliances. If so, then IKEA has the perfect medicine for you. Introducing the “bookbook”, a revolutionary reading experience that offers you the best of tactile feedback, touch-based interfaces, wireless connections, and perpetual battery life.

With IKEA’s bookbook, which will showcase the company’s 2015 catalog, you won’t have to worry about charging batteries. And you won’t also have to fret about getting tangled up in wires. Everything is all built-in. The display quality is so high that it would make any “Retina Display” device cry with envy. And the tactile feedback it offers is something engineers and manufacturers can only dream of. Multi user support is also no problem thanks to color-coded labels. Security is also a snap, with both gesture-based triggers and voice alerts.

Unfortunately, there are a few drawbacks to this new bookbook technology. Portability might be sacrificed unless you have a bag or sleeve with you all the time. Unlike some e-ink readers, there isn’t even any backlighting, so you will have to rely on some light source accessory. Sharing is also a limited, practically within the same geolocation coordinates as you, give or take a few feet. And lastly, reading is fixed in a left to right orientation, which might be a bit awkward for those used to right to left (RTL) directions. There might also be a bit of a problem with privacy when it comes to multi-user access, but then again an IKEA Catalog is meant to be shared and shown off, not kept private.

IKEA’s bookbook, the product of centuries of evolution and feedback from various ebook and tablet users, is a comic reminder of technologies that exist beyond the bezels of our smartphones and tablets. And speaking of comic, IKEA isn’t exactly the first to point out that reality, as this Penny Arcade strip back in 2009 shows. 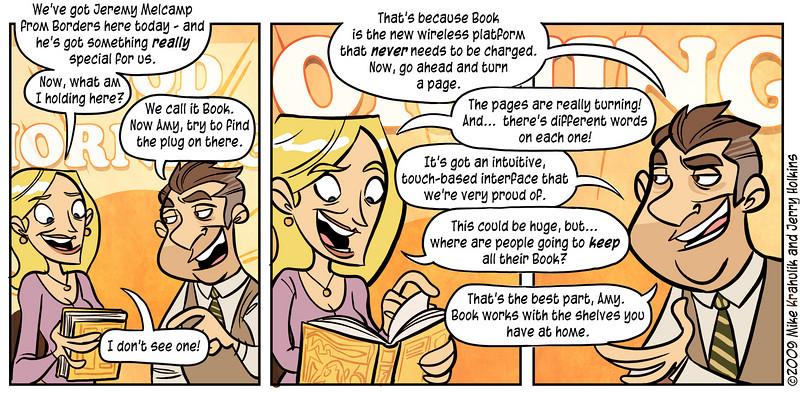 The IKEA 2015 Catalog will be available in Singapore and Malaysia this Monday. That said, its availability also betrays one of its biggest disadvantage of all. Unless you pick up a bookbook from the store, downloading will be snail-paced.