With all the focus on high-end smartphones for the past few months, some might have forgotten that larger screens still do exist. If market analyst IDC‘s figures are correct, then there is a basis for that. Global shipments of tablets have sunk at a new low, as much as 7 percent compared to the same second quarter last 2014. Even compared to the first quarter of this year, there was a 3.9 percent decline in numbers, revealing a worrying trend for tablet makers, especially for Apple and Samsung.

Only 44.7 million tablets were shipped in the second quarter of 2015. Compare that to the 48 million in the same period last year, and you know it’s not good. IDC attributes this slack in numbers due to tablets having a longer life cycle than smartphones and the fact that most can install the latest OS versions on older models. This gives very little incentive for users to seek out new tablets. Then again, there haven’t been much high profile tablets in a while either.

It’s not all doom and gloom, however. Not unless you’re Apple and Samsung. Though still at the first and second ranks, respectively, the two have taken the biggest hit. Apple’s shipments declined from 13.3 million to 10.9 million, a sharp fall of 17.9 percent. Samsung had it a bit better, going from 8.6 to 7.6 million, a 12.0 percent cut. This has opened the door for the rest of the industry to fill in the gap.

Lenovo, the third largest tablet OEM in terms of shipments, gained a 6.8 increase. Huawei and LG are tied for fourth and fifth and have seen an even more staggering 100 to 200 percent jump in shipments. E FUN, who has been steadily making budget 2-in-1 tablets, has, for the first time, entered the top 10. 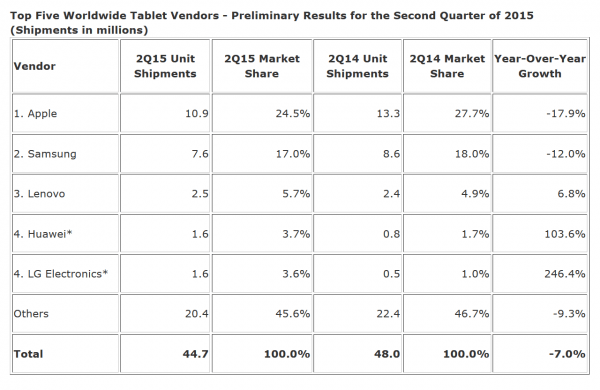 IDC believes that the tablet vendor landscape is shifting a bit, which could inject renewed interests and numbers to the market segment. 2-in-1 tablets are becoming more popular and tablets are increasingly turning into productivity machines. Apple is also expected to unveil a new iPad Pro that will set a new standard for tablets, giving the market something new to obsess about.