Hyundai may be one of the few automakers with a hydrogen-powered vehicle on the road, but even that didn’t prepare us for its latest fuel cell concept. The Hyundai HDC-6 Neptune is the company’s vision of a zero-emission truck, and it’s not just the powertrain that sets it apart from other such models.

Hyundai is teasing the HDC-6 Neptune ahead of its full reveal in Atlanta, at the North American Commercial Vehicle Show. It’s intended to preview not only what the South Korean automaker believes could be the future of green haulage, but a brand new design language unlike pretty much anything else on the road.

On the outside, the HDC-6 Neptune is a striking combination of TRON meets Art Deco. The automaker says it’s inspired by the streamliner railway transits of the 1930s, with bold arching lines picked out in glowing neon blue. It’s more akin to a futuristic Greyhound bus than anything you’d expect to see pulling a load.

Inside, meanwhile, it’s a high-tech paradise. The spacious cabin is perched right at the front of the truck, studded with glass so that visibility of the corners is about as clear as it could be. For those blind-spots that still exist, Hyundai designer Chohee Park has added integrated displays, which beam live video from cameras around the HDC-6 Neptune to sections of the windshield frame. 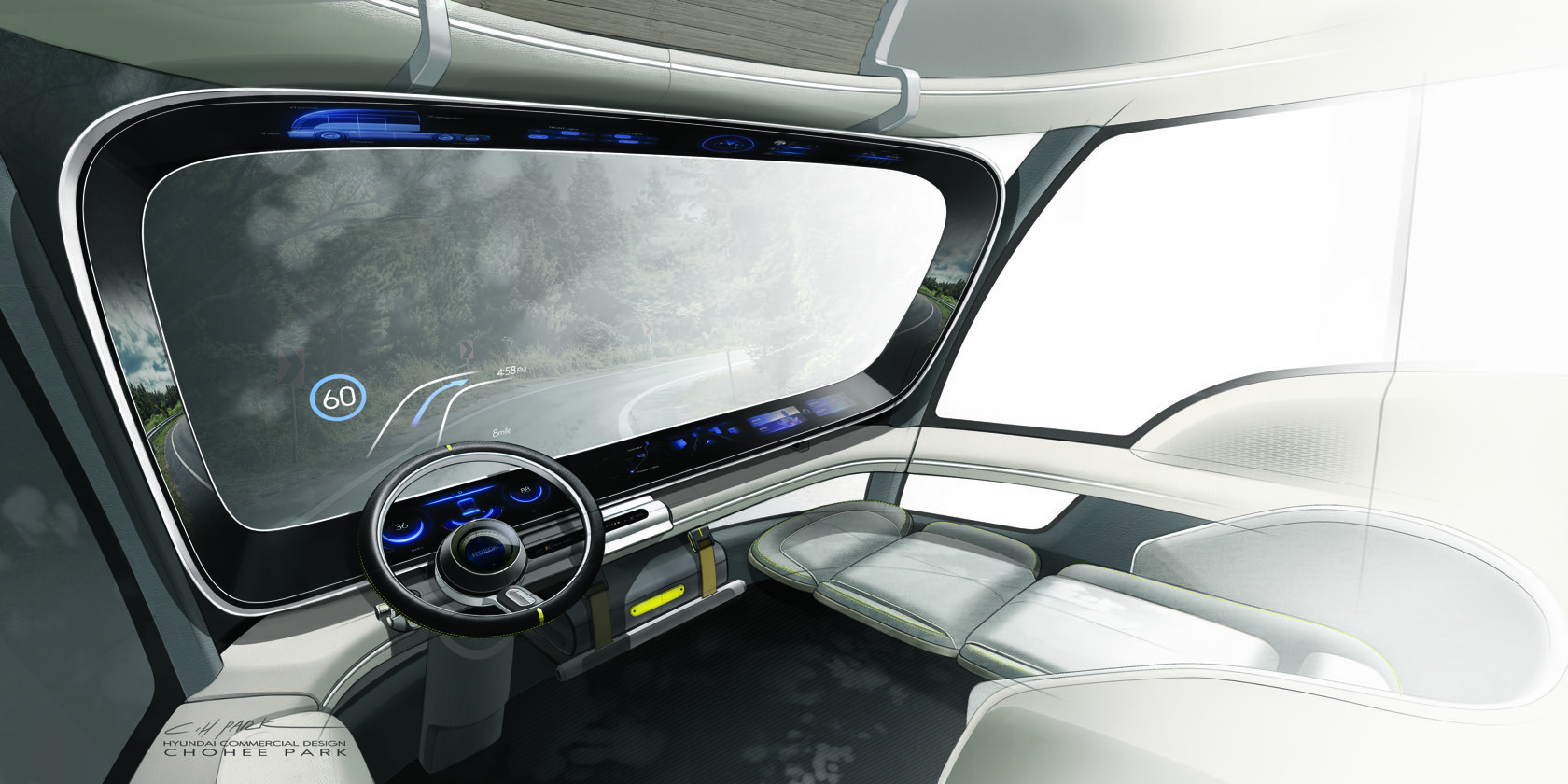 That same frame acts as the dashboard, with embedded digital instrumentation along the bottom. An augmented reality windshield can project key data – such as vehicle speed and navigation routes – right on top of the view of the road ahead. Above the windshield, a status display shows metrics about the truck.

With no conventional gas or diesel drivetrain, Hyundai has been able to use that space to make the cabin more appealing. Seats that convert into beds, as well as custom integrated luggage should make it a more tempting place for long-haul truckers.

The key to all this, of course, is the fuel cell drivetrain. Hyundai named the concept truck after Neptune, Roman god of the seas, because the oceans are the largest potential source of hydrogen on the planet. “With the introduction of HDC-6 NEPTUNE,” Edward Lee, Head of Commercial Vehicle Business Division at Hyundai Motor Company, says, “in addition to the road proven Xcient fuel cell truck, we expand our technology leadership into the commercial vehicle sector by unveiling our vision of how fuel cell electric trucks can resolve the environmental equations of widely used commercial vehicles and our commitment to create a decarbonized society.”

Hydrogen vehicles rely on complex fuel cell systems to convert the gas into electricity. The waste products in that process are only water. While there are a few hydrogen powered cars on the market already, they’re typically only sold in limited geographies, reflecting the relatively small distribution area of hydrogen as an automotive fuel.

For commercial applications, though, hydrogen does have some advantages over rival green truck projects which typically look to battery-electric drivetrains. Hydrogen can be refueled at a much faster rate than charging a battery, potentially allowing truckers to get back on the road sooner and deliveries to be more efficient.