Today’s most mysterious combination of components to hit the mobile universe must be no less than the Hyundai T7 tablet, revealed with a Samsung Exynos 4 quad-core processor and a 7-inch display for just $166 USD. While at that price we’re certainly not confident this machine is going to run, it certainly does look enticing with a 1280 x 800 pixel display across 7 inches and an HDMI port out for connectivity with your HDTV. Once you’ve gotten past those points, it’s all comes tumbling downhill.

The reason this device is so very inexpensive is the fact that it’s got a 2 megapixel camera on the back, a 0.3 megapixel camera on the front, and a display with just “178 degree viewing angles.” That’s nothing to get out of your seat for. You do get Mali 400 graphics in this amalgamation of oddities, but with 1GB of RAM and 8GB of internal storage, you’ll have a relatively tough time running some of the most powerful apps on the market – and you’ll barely have space to hold more than a few.

There’s no microSD card slot so you’ll not be expanding your storage any time soon, either. Though you do get Bluetooth, it’s not specified whether you’re working with the newest Bluetooth 4.0 – you do get a G-sensor and GPS as well as wi-fi, thankfully. Beware on the software end of things also, as you’re not going to be getting anything more than what the manufacturer says comes with the machine right out of the box: Android 4.0 Ice Cream Sandwich. 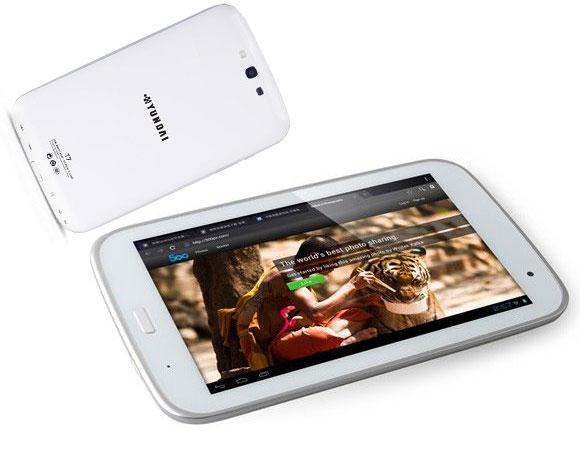 Then there’s the battery – all 3000mAh of it. That’s a giant battery, folks, but in that the manufacturer says you’ll be promised just 4 hours of up time per charge, you can bet that you’ll need to be plugged in quite often. The display also has 5-point multitouch instead of the basic standard we’ve seen in touchscreens since the original iPad: 10-point touch, and this device straight up rips off the design aesthetics of the Samsung Galaxy lineup, everything from the Galaxy S III forward.

It’s absolutely baffling that Hyundai was allowed to purchase and implement Samsung’s Exynos 4412 processor in this machine. We suggest you, the reader, stay away – far away.