Hyundai may have its Genesis brand for its luxury aspirations, but the new Le Fil Rouge concept car suggests the automaker’s designers aren’t quite ready to give up the high-end market yet. Revealed at the Geneva Motor Show 2018 today, the sizable sedan is billed as a vision not only of Hyundai’s design language for its next generation of cars, but how it sees artificial intelligence and other technology in automotive developing.

The outside is a huge, silver teardrop, all curvaceous lines with a few crisp creases along the way. Hyundai calls it “Sensuous Sportiness” and it’s all about bringing together elements of architecture with technology. “The goal is to create an aesthetic bond throughout the future range,” Hyundai insists, claiming that its customers choose the automaker’s cars because of design first and foremost. 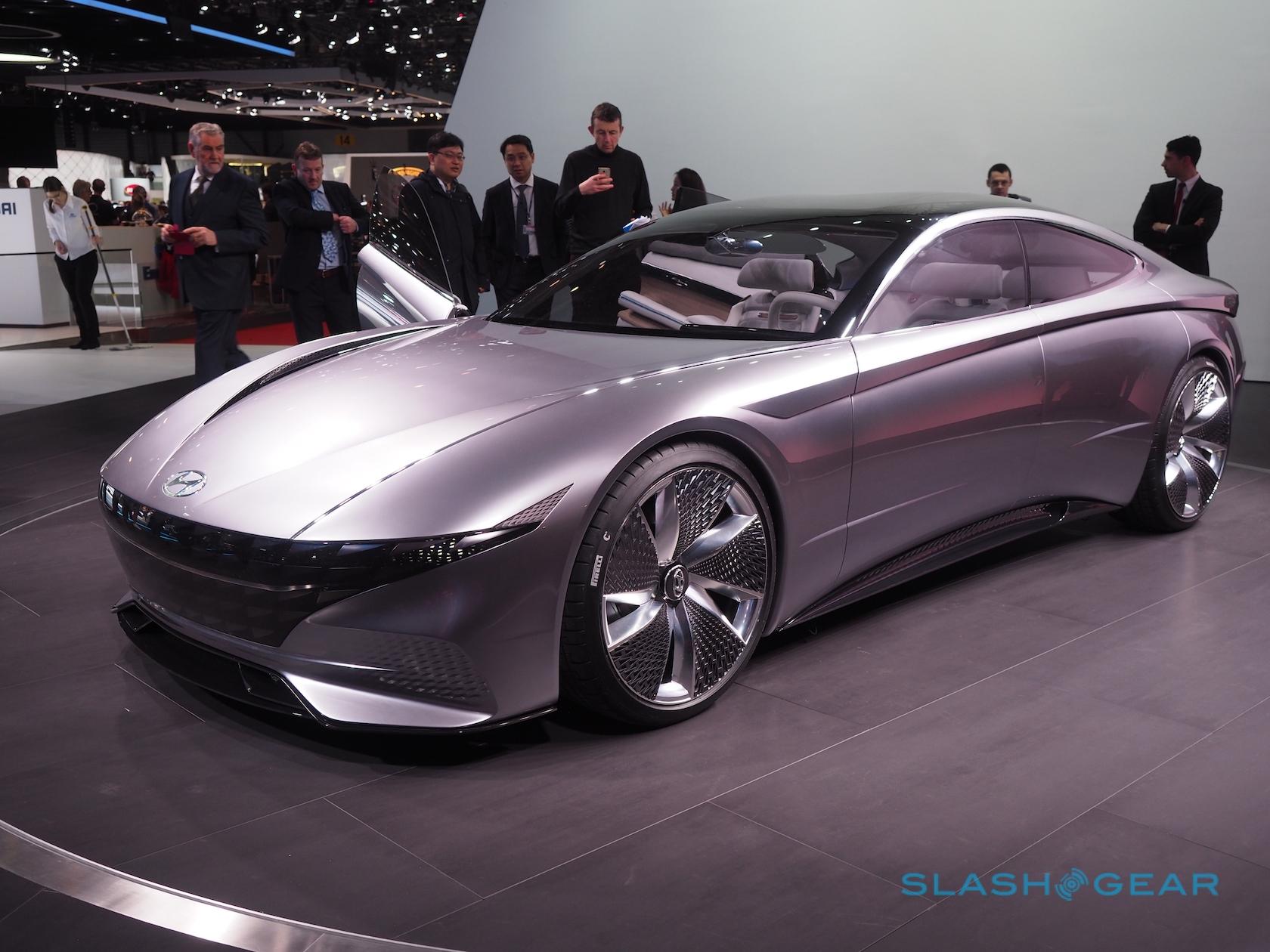 The outside is good, but the interior is arguably better. Hyundai has succumbed to the usual show-car conceit of having rear-hinged back doors, which allow the whole side of the vehicle to open up and expose the cabin. Practically, that’s not exactly the most feasible route for a production car to take, but it does expose what excellent work the automaker’s designers have done with the cabin.

You notice first the structure of the doors, which have been left uncapped. You can see into them, where wood veneer coexists with structural metal bracing like the interior of a zeppelin. Hyundai has made plentiful use of negative space, carving out huge swathes of the door panels and dashboard, lining them with arcs and dips of wood, and giving the Le Fil Rouge’s cabin an airy, spacious feeling as a result. 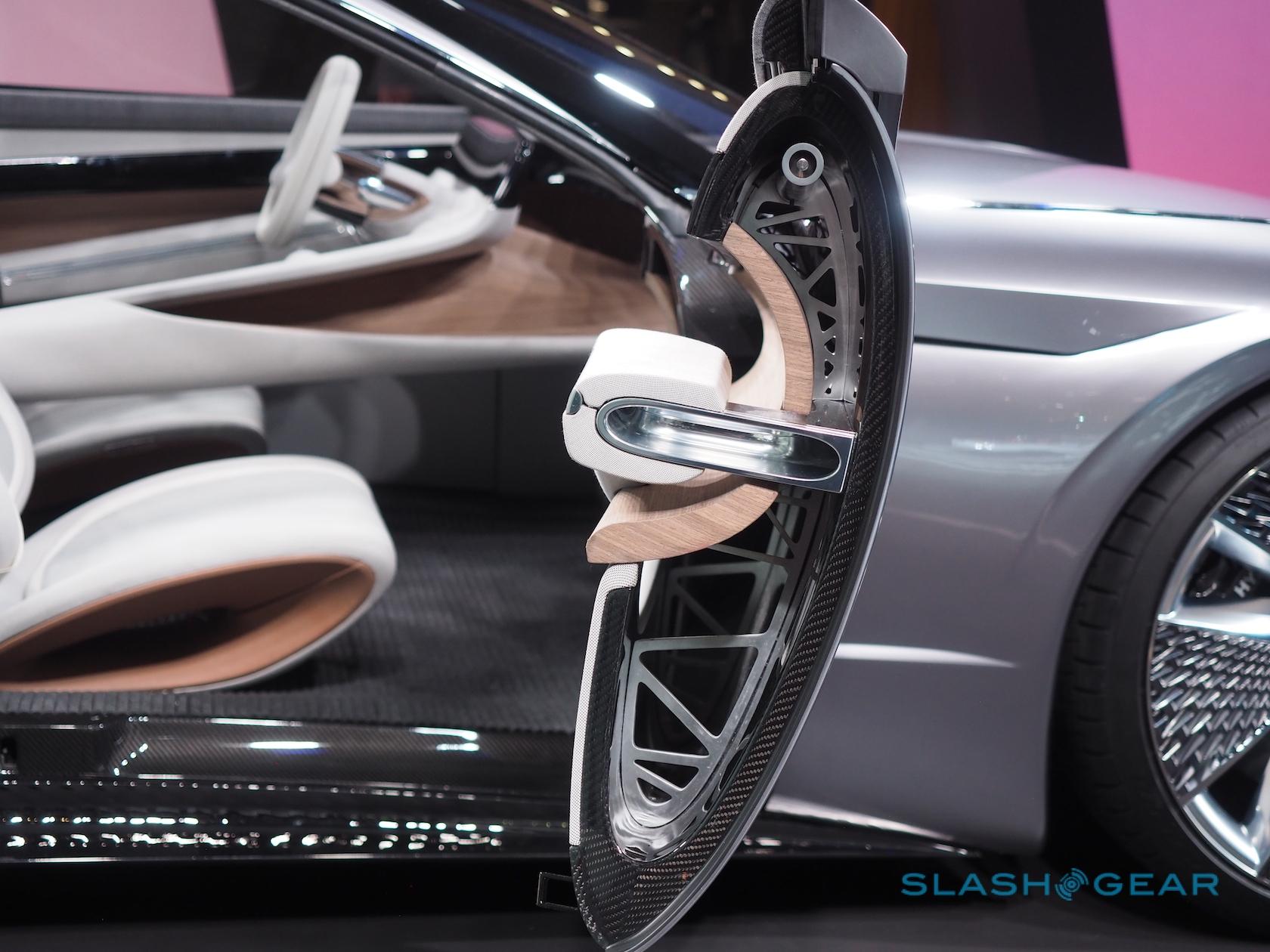 The same strategy carries through to the seats, which are more like minimalistic loungers than what you’d typically find in a car. As for the switchgear, Hyundai keeps that to a minimum. There’s some gorgeous burled metal to the knobs, for example, but other buttons simply glow through the fabric covered steering wheel or other panels, and are triggered with a light touch. 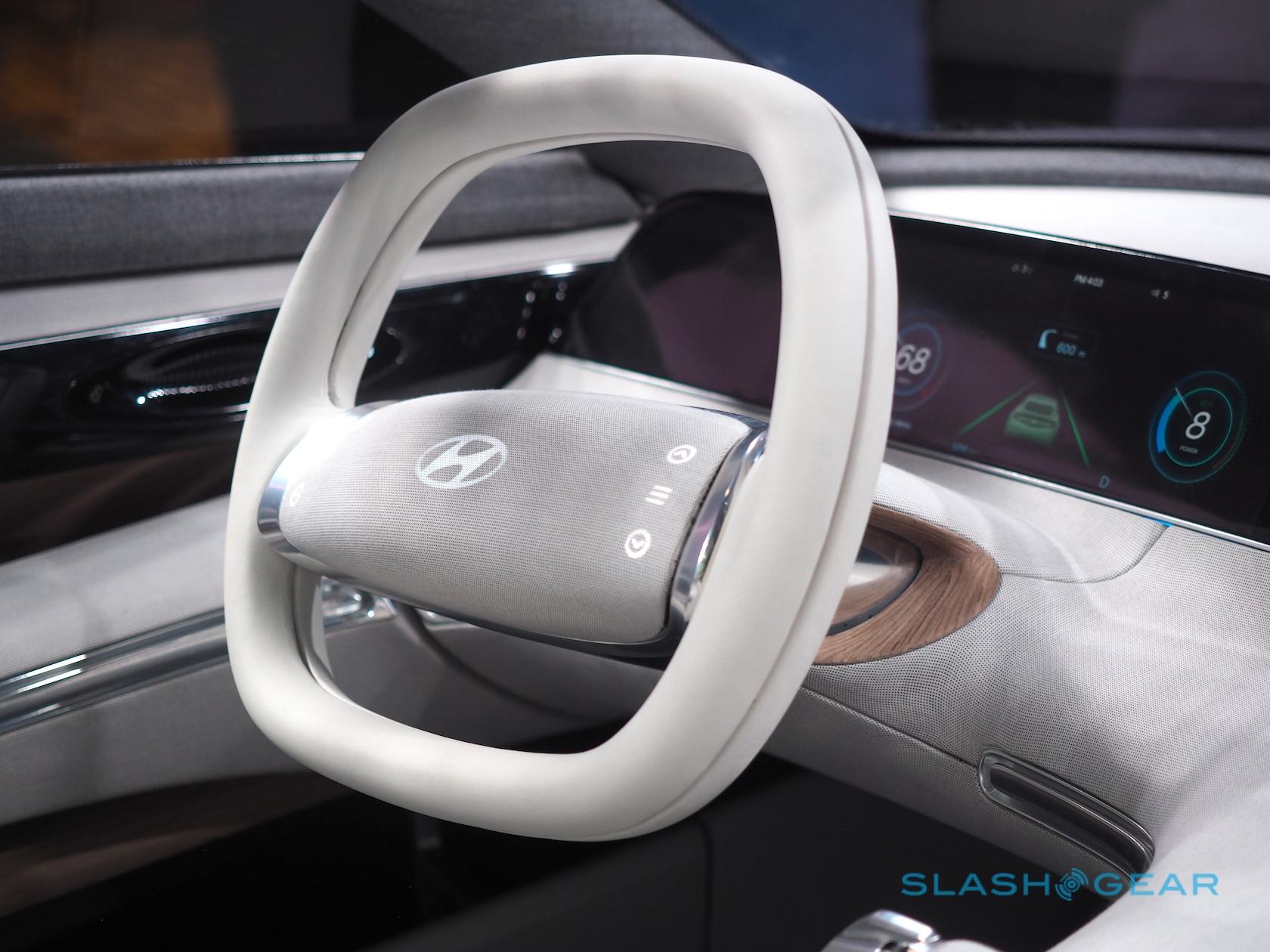 It’s something we hope Hyundai brings over to its production vehicles, because it’s a much calmer, tactile, and more relaxing interpretation of what the modern dashboard could be. Then again, we may merely be talking to our future cars instead, at least as the Le Fil Rouge sees it. 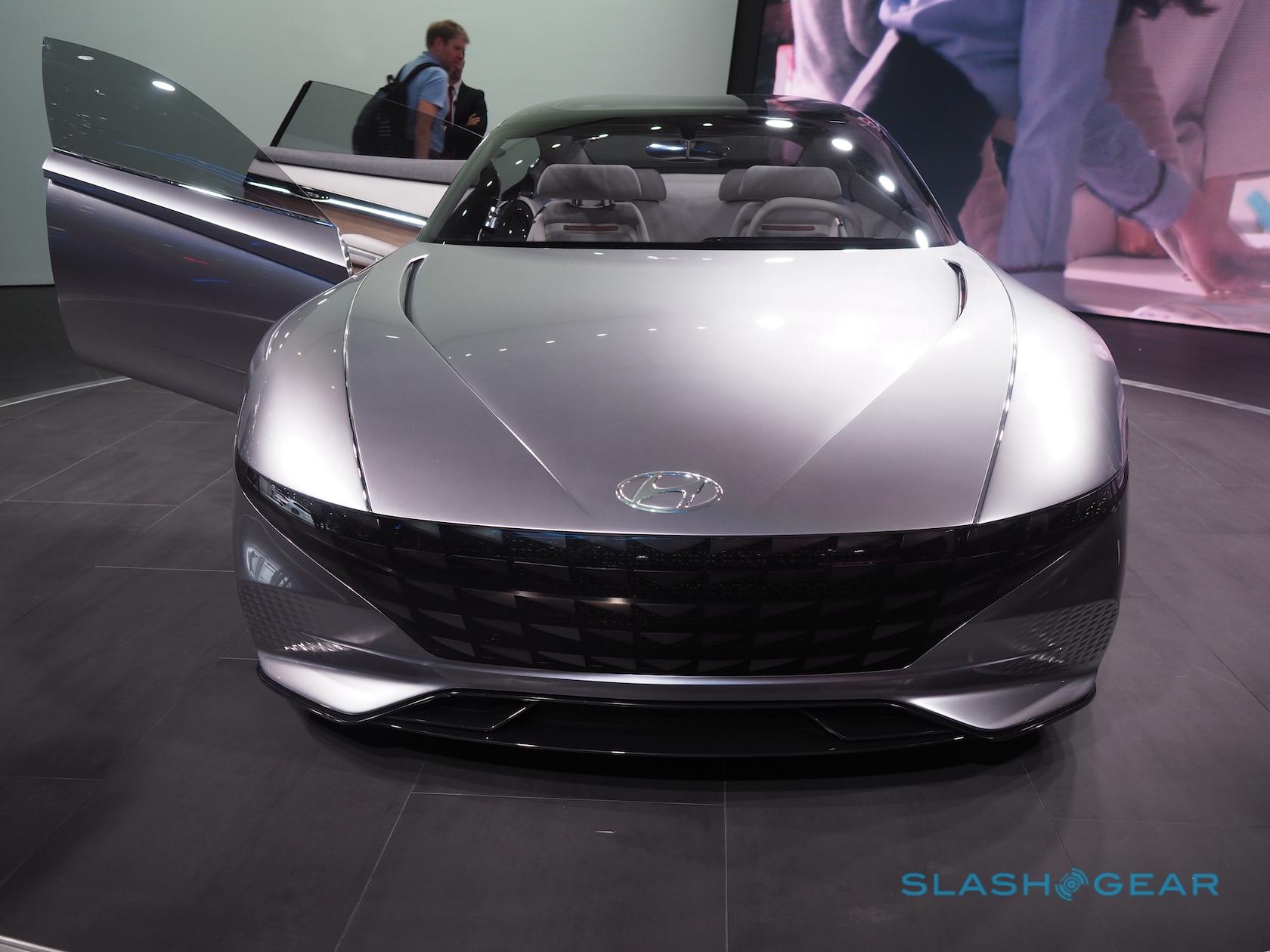 The concept previews what Hyundai has brand its Intelligent Personal Cockpit, blending together voice control with connected devices both local and remote. While you can interact with the car’s own systems by voice, it also supports remotely activating your IoT devices at home. For example, Hyundai suggests, you’d be able to control appliances while out of the house, all from speaking to the dashboard. 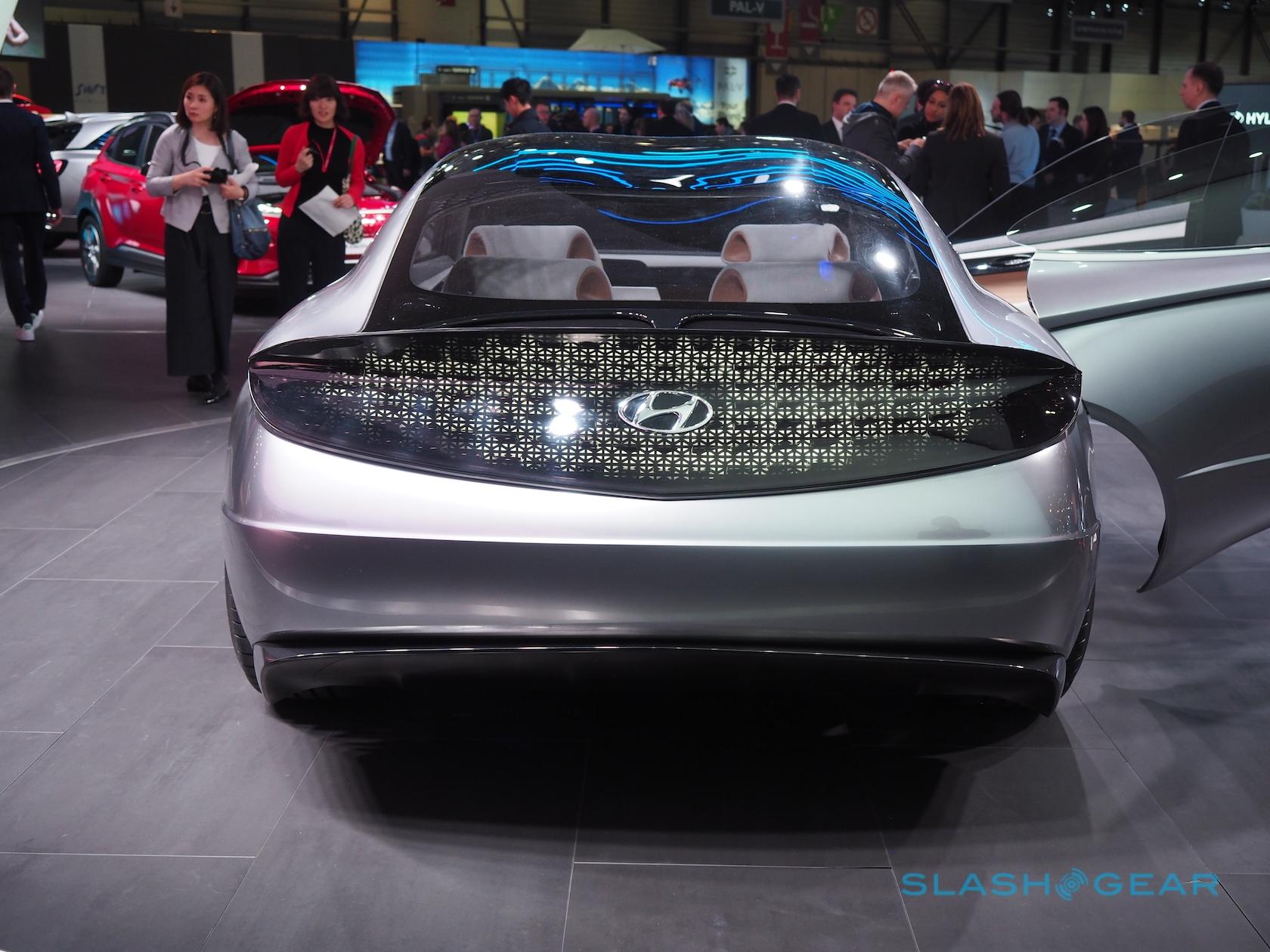 While you’re in the car, meanwhile, the Le Fil Rouge concept is keeping an eye on you, too. Hyundai Wellness Care uses sensors in the seat and steering wheel to track the driver’s stress levels. Get worked up from traffic congestion or bad behavior from your fellow drivers, and the car can play relaxing music or even change the cabin lighting to calm you down. 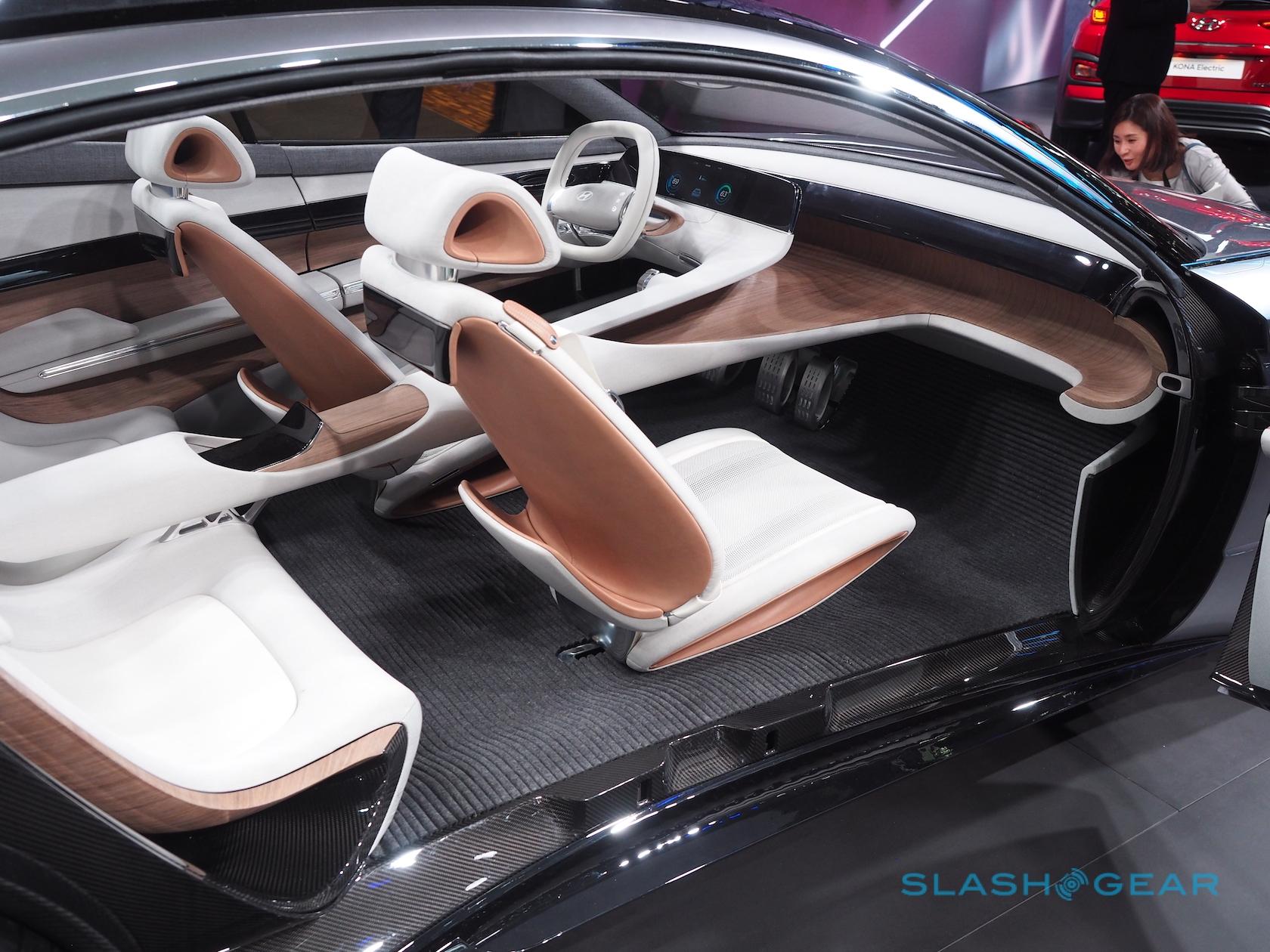 How much of that will actually make it to a production vehicle remains to be seen. Hyundai says the core ideas of the Le Fil Rouge will gradually trickle down to its production cars, though the mood-tracking magic probably won’t arrive in dealerships any time soon.