Hydrogen fuel cells could be the answer to building out a comprehensive EV charging network, but not in the way you might be thinking. While fuel cell based cars like the Honda Clarity and Toyota Mirai have seen limited launches, emitting only pure water as a waste product, one UK startup believes the hydrogen works better if you leave it behind.

Fuel cells generate power through the electrochemical reaction of hydrogen and oxygen; in a hydrogen-powered car, that energy is used to drive an electric motor for propulsion. It’s not quite as straightforward as whisking together the two components, of course. Each fuel cell is based on a complex sandwich of catalysts.

The benefit to fuel cell vehicles is range and speed of refueling. The Mirai and Clarity both promise around 350-400 miles of driving from a full tank of hydrogen. Refilling that tank takes approximately the same amount of time as filling an internal combustion car’s fuel tank.

That is, assuming you can find a hydrogen pump. Deployment of fuel cell vehicles has been stymied predominantly by the paucity of hydrogen infrastructure. Now, UK company AFC Energy believes it has an alternative: leave the fuel cell in one place, and have the cars come to it. 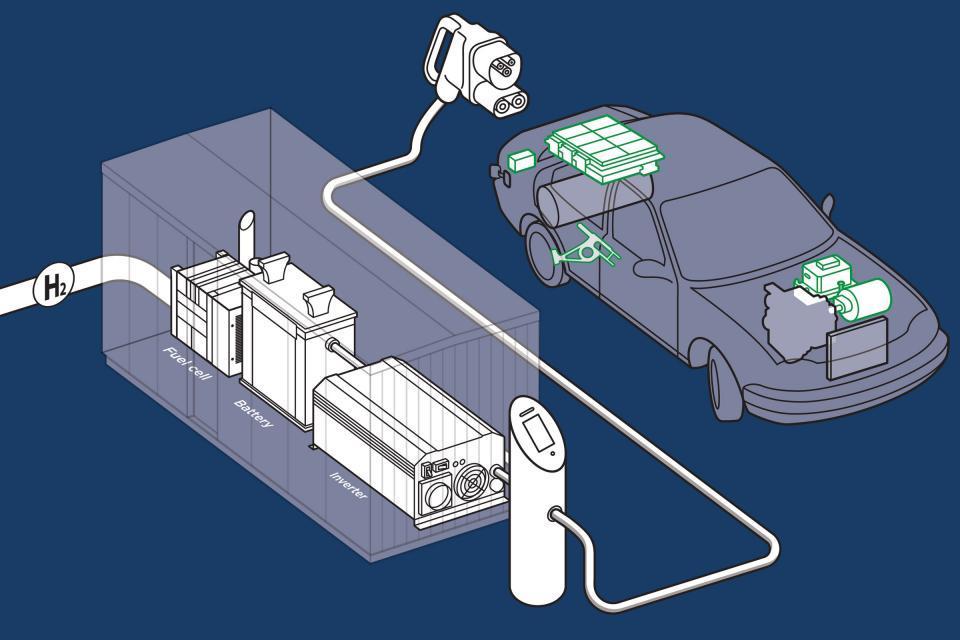 It has demonstrated what it’s calling the world’s first electric vehicle charger based on hydrogen fuel cell technology. Dubbed CH2ARGE, the proof-of-concept used a fuel cell connected to a static hydrogen tank, feeding power through an inverter to an electric car – in this case, a BMW i8 hybrid. A 48V battery pack is used to help with peak power demands.

AFC Energy’s argument is that locally generating electricity can be much easier, not to mention emissions-free, using hydrogen on-site. It envisages a modular energy unit, which could be either connected to a fixed hydrogen supply or a tank that would be periodically refueled, and to the electricity grid or designed for an off-grid installation. By scaling up the system, capacity for an increasing number of EVs could be provided, such as to cater for visitors to supermarkets, shopping malls, or sports stadiums.

Currently, installing EV charging points requires a high-power electricity supply be present. Without it, drivers are limited to slower Level 1 or Level 2 charging. In the US, various projects to boost the number of those high-power connections are underway, but it’s not a fast process.

In contrast, AFC Energy argues, its hydrogen-based chargers could be installed far quicker – even potentially brought in as an emergency energy supply for EVs in disaster areas or for temporary peaks in demand such as festivals. The demo system can charge two vehicles simultaneously; based on average use, the company suggests, the hydrogen tank might only need refilling each month.

Obviously it’s still not a perfect power distribution system. The hydrogen that the fuel cells use needs to be generated somewhere – though AFC Energy points to the various green ways that the gas could be produced – not to mention transported to each EV charging station.

Nonetheless it’s a new twist on the battery-electric/fuel cell argument that continues within the EV segment, as proponents of each push their case. AFC Energy isn’t saying when it believes it might be able to commercialize its system, though back in November last year it did announce it was working on a low-cost, containerized system which could put a fuel cell generating 150-200 kW into a standard 40ft shipping container.