Humans are using up nature’s resources ‘budget’ faster than ever

On Thursday, Global Footprint Network issued a statement saying that over the past eight months, humans have “used up nature’s budget” for 2015, meaning the remainder of the year will be spent using up resources and impacting Earth in such a way that is, in the long term, unsustainable. Carbon sequestration is said to be responsible for more than 50 percent of the demand on nature. Humanity’s ecological footprint continues to exceed our planet’s biocapacity — that is, nature’s ability to keep up with our demands.

The organization tracks the demands humans place on our planet, and keeps tabs on what it calls ‘Earth Overshoot Day’, which is the day when humanity’s demands on nature begin to exceed nature’s ability to meet those demands. Back in 2000, Earth Overshoot Day took place in October. Now, 15 years later, the day has happened on August 13. 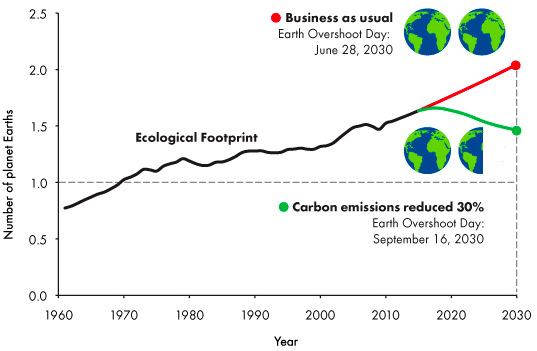 This so-called ecological over-spending is represented in many forms: soil erosion, deforestation, a growing scarcity of fresh water, droughts, excessive carbon dioxide in the atmosphere, and more. Of these, Global Footprint Network says the latter will have the biggest effect, serving to speed up the others. The world is said to have gone into “ecological overshoot” in the 1970s, and our carbon footprint is more than double now.

Said Global Footprint Network’s President Mathis Wackernagel, “The global agreement to phase out fossil fuels that is being discussed around the world ahead of the Climate Summit in Paris would significantly help curb the Ecological Footprint’s consistent growth and eventually shrink the Footprint.”