However, Ganymede is so cold that water on the surface freezes, and the liquid ocean is roughly 160 kilometers below the crust. Scientists believe that a subsurface liquid ocean could potentially harbor life. Astronomers have now, for the first time, discovered evidence of a sublimated water atmosphere on Ganymede. The discovery was made using observations from the Hubble Space Telescope Imaging Spectrograph.

In 1998, the Space Telescope Imaging Spectrograph took the first ultraviolet images of Ganymede (seen below), revealing a pattern in the observed emissions from the moon’s atmosphere. The auroral bands are somewhat similar to Aurora ovals observed on Earth and other planets with magnetic fields. The images were seen as evidence that Ganymede has a permanent magnetic field. Differences were explained at the time by the presence of atomic oxygen, which produces a signal that affects one UV color more than another.

As part of an observation program to support the NASA Juno mission in 2018, researchers set out to capture UV spectra of Ganymede with the Cosmic Origins Spectrograph instrument aboard Hubble to measure the amount of atomic oxygen. The team combined the analysis of the new spectra taken in 2018 with the archival images from 1998 and 2010. In contrast to the original interpretations of the data from 1998, researchers discovered there was hardly any atomic oxygen in Ganymede’s atmosphere. 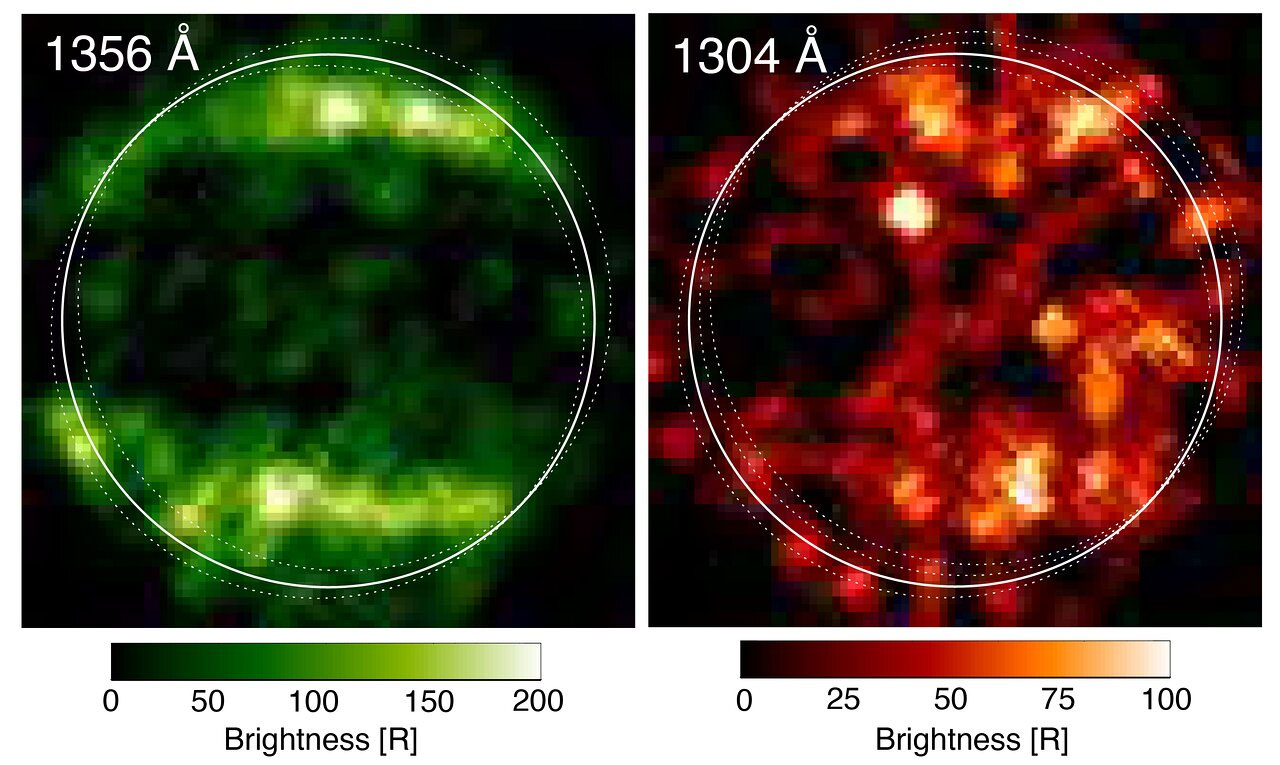 That would mean there was another explanation for the apparent differences between the UV aurora images. Researchers discovered more information in the relative distribution of the aurorae seen in the two images. The surface temperature of Ganymede varies strongly during the day. Around noon near the equator, it may be sufficiently warm that the icy surface releases small amounts of water molecules. The team says the perceived differences between the UV images directly correlate with where water would be expected in the moon’s atmosphere.

The ESA said the finding adds anticipation to its upcoming JUICE mission, which is the first large-class mission in the ESA’s Cosmic Vision 2015-2025 program. It will launch in 2022 and arrive at Jupiter in 2029. That mission will spend three years making detailed observations of Jupiter and its three largest moons with an emphasis on Ganymede. That mission should shed more light on Ganymede and its potential habitability.