In 1989 when the Voyager 2 spacecraft flew by Neptune it was able to observe some massive storms on the surface of the blue planet. Once those storms were first noticed, the Hubble Space Telescope began keeping an eye on the planet to learn more about Neptune and its atmosphere. Observations of those storms have gone on for years.

Over the years Hubble has been able to watch new storms develop and it has been watching for years as a gigantic storm on Neptune has begun to dissipate. The storm was large enough to reach from Boston to Portugal when it was first observed. Hubble has watched the storm shrink and researcher Michael Wong from Berkley has said that it appears that Hubble is capturing the demise of the dark vortex. 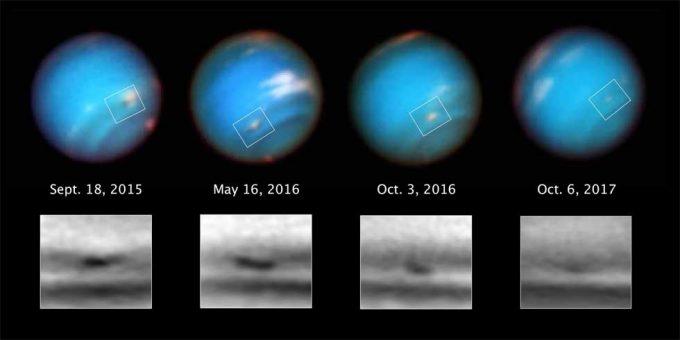 Originally the scientists thought that the storm would drift towards the equator of the planet and when it reached there it would break up. Rather than following what the scientists thought would happen, the storm drifted towards the south pole of the planet and began to quietly fade away. In 2015 when it was observed by Hubble, the vortex was 3,100 miles across the long axis.

It is now down to 2,300 miles across. Scientists say that the anticyclones pull up darker material from deeper inside Neptune as they spin and some think that the material could be hydrogen sulfide, which smells like rotten eggs. The storm is carried along by three wind jets that circle the planet.

These wind jets are the fastest ever detected in the solar system and scientists think they could reach supersonic speeds. Hubble and Voyager are the only scientific instruments able to observe Neptune’s storms.