The Hubble space telescope has discovered a new exoplanet, and this one is bizarre. The planet has an odd shape with NASA saying it resembles a football. NASA also says that the planet is very hot. It can tell the planet is very hot because it has heavy metals that are escaping from the atmosphere of the planet rather than condensing into clouds.

The planet is known as WASP-121b, and its observations represent the first time that so-called heavy metals, which are elements heavier than hydrogen and helium, have been spotted escaping from a hot Jupiter planet. Planets of that type are large gaseous planets that orbit very close to the host star. Hot Jupiter planets are generally cool enough inside to condense heavier elements like magnesium and iron into clouds, but WASP-121b is too hot for that.

NASA says that the temperature in the exoplanets upper atmosphere is about ten times greater than any known planetary atmosphere. WASP-121b’s host star produces ultraviolet light that is brighter and hotter than the sun and heats the upper atmosphere of the planet and helps the heavy metals escape. The escaping magnesium and iron gas may also contribute to the temperature spike. 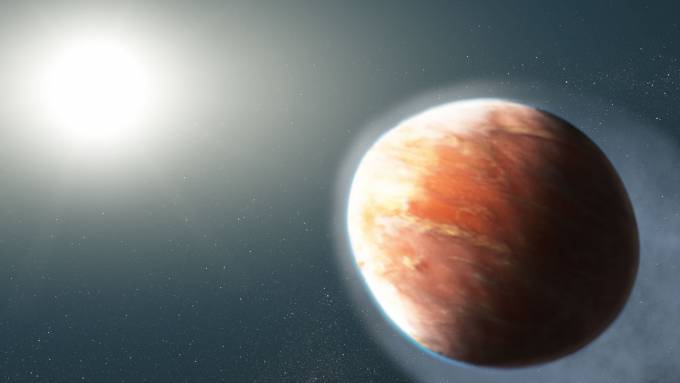 Scientists say that the metals will make the atmosphere more opaque in the ultraviolet and contribute to the heating of the upper atmosphere. Making the planet even less hospitable is the fact that the planet is so close to the host star it’s on the cusp of being torn apart. The football shape comes from the gravitational tidal forces.

The WASP-121 star system is about 900 light-years from Earth. The study of WASP-121b is part of the Panchromatic Comparative Exoplanet Treasury survey, which is a Hubble program to look at 20 exoplanets that range in size from Super-Earths to Jupiters in the first large-scale ultraviolet, visible, and infrared comparative study of distant planets.