The Hubble Space Telescope has been orbiting the Earth and taking some of the coolest images of space that we have seen for 28 years now. To celebrate its nearly three decades of service, Hubble was aimed at the stunningly beautiful Lagoon Nebula and some of the images have been shared with the masses. The Lagoon Nebula is described as a vast stellar nursery.

This certainly isn’t the first time that the Lagoon Nebula has been observed and images shared, but as one of the most picturesque areas of the known universe new images are always welcome. The nebula is massive spanning 55 light-years wide and 20 light-years tall. Lagoon Nebula is 4,000 light-years from Earth, but it is easily viewable.

You can even see it with the naked eye if you are in an area with clear, dark skies. At such gargantuan dimensions, the Hubble is only able to capture a small fraction of the total nebula. The main image of the nebula seen here is only 4 light-years across. The name of the nebula comes from a “broad, lagoon-shaped dust lane” that goes across the nebula that can be viewed in wider shots of the nebula.

This anniversary image of the nebula shows the heart of the Lagoon Nebula. There are lots of large, hot stars in the nebula and the UV radiation from them ionizes the surrounding gas and makes it shine brightly. That radiation also turns the gas into the cloud-like shapes we can see. The large and very bright star in the center of the image is called Herschel 36.

The radiation from that star also helps to shape the clouds of gas seen in the image. That radiation blows some of the gas away creating areas of varying density. The other images here are the same nebula in infrared allowing us to see through all the dust and view the vast number of stars hidden underneath. 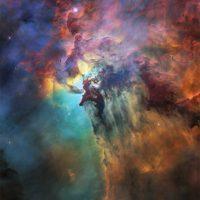 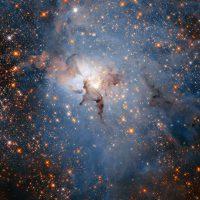 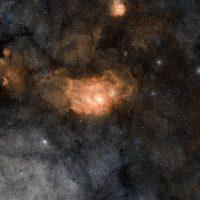