An image – together with specifications – of HTC’s upcoming budget Windows Mobile 6.5 smartphone has leaked.  The HTC Mega appears to be part of HTC’s push for mid-range devices, with a 2.8-inch touchscreen running at just QVGA resolution and a 3.2-megapixel camera with fixed-focus.

However you do get HSPA 900/2100MHz together with quadband GSM/EDGE, along with WiFi b/g, Bluetooth 2.0+EDR and GPS/A-GPS.  HTC’s TouchFlo UI is also present, and as you can see from the image above it has a slightly tweaked appearance for its WM6.5 incarnation.  The zoom-strip from the Diamond2 and Pro2 is also present, and inside HTC’s old favorite, the Qualcomm MSM7225 528MHz processor, does duty with 256MB ROM and 256MB RAM.

Renders of the Mega were spotted back in August, and while we can’t exactly describe the 104 x 55 x 12.8mm handset as handsome, it does have a certain sturdy charm.  What remains to be seen is pricing; HTC CEO Peter Chou has previously suggested that their mid-range devices will carry roughly $300 price tags, pre-subsidies and discounts. 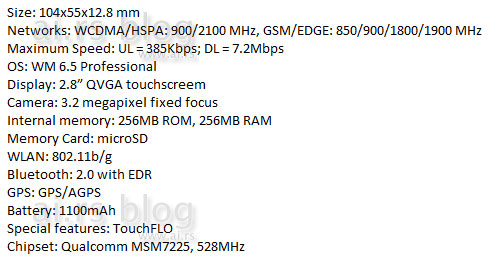