The HTC Legend has landed, and you know we’ve wasted no time in putting the new Android 2.1 smartphone in front of a camera for a video unboxing. Announced last month at Mobile World Congress 2010, and set to hit shelves across Europe sometime next month, the Legend is the spiritual successor to the much-loved HTC Hero but with a new, unibody twist. Check out our hands-on shots, first-impressions and unboxing video after the cut.

As you can see from the video, in the box there’s the Legend itself, the battery, an A/C adapter, USB to microUSB cable and a wired hands-free headset. Our particular review unit didn’t come with a microSD card, but we imagine retail boxes will do. Whereas the entire rear panel of the Hero detached in order to fit the battery, on the Legend the soft-touch plastic bottom panel slides off to reveal a slot into which the battery fits. There are also slots for the SIM and microSD card.

It’s a noticeably thinner handset than the Hero, helped by the incredibly tactile brushed aluminum finish. HTC create the body by carving away from the single block of metal, and the end result is something naturally soft-touch but sturdy as well. Since the casing is also the chassis, you have a thinner device too. Our only mild disappointment is the row of buttons under the display – Home, Menu, Back and Search – which feel a little clicky and slightly cheap.

First impressions of the OS is that it’s all very similar to what we’re used to from the Hero, and other HTC Sense devices. They’ve sensibly added some helpful tips that hover over the homescreen and flag up features – such as the “helicopter view” Exposé-style overview of the seven panes, triggered either by a pinch-zoom gesture or by tapping the Home button – which should get new users up to speed sooner. Meanwhile there are a few new HTC widgets, and the company have mixed up their own and Google’s into the same list rather than segregating them as on the Hero. 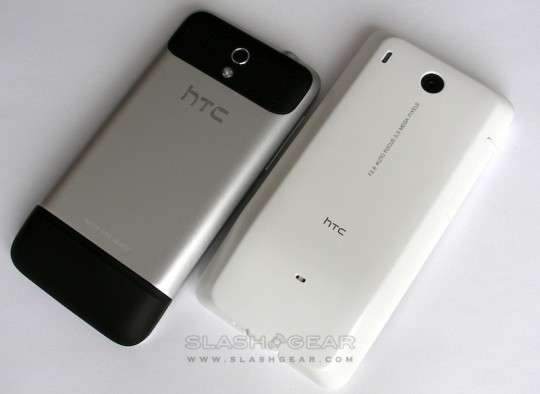 With the slight processor boost – Qualcomm’s MSM7227 600MHz versus the Hero’s 528MHz chipset – we’re not expecting the Legend to be a speed demon, and we’ll be seeing how well it multitasks over the course of our review. The onscreen QWERTY keyboard feels responsive, though, and we’ve always been fans of HTC’s auto-correction and predictive text functionality. The AMOLED display, meanwhile, is bright and color-saturated, though a little less wowing than the larger panel on the Nexus One (and HTC Desire).

So far, so good then; a phone that feels like a real premium step up from the Hero, but that’s still pocketable and user-friendly. We’re off to put the HTC Legend through its paces, so until our full review check out the unboxing video and initial demo video below!