We were expecting an HTC tablet at MWC 2011, and boy has the company delivered. The HTC Flyer is a 7-inch Android slate based on a 1.5GHz Qualcomm single-core processor running Android 2.4 Gingerbread, with a new, refreshed version of HTC Sense. Oh, and just to really stir things up, it has a stylus.

As well as working as a regular capacitive touchscreen with multitouch gesture support, the Flyer’s display packs an active digitizer. Bundled is a battery-powered stylus – it uses an AAAA battery which HTC says should rarely need replacing – that’s pressure sensitive, and allows for handwriting recognition, sketching and flowing ink in the newly adapted Sense. HTC has created a new app, Notes, specifically for stylus use, into which you can paste and annotate text and photos, and then sync them wirelessly to Evernote. Notes will also allow you to record audio in a feature called Timemark, time-linking your handwritten jottings to index points along the track so that you can skip easily to each section. They’re also linked to the calendar, so you’re offered a new note when you have a scheduled appointment, or the chance to append to old notes for recurring appointments.

That’s not the extent of Sense’s adaptations, however. HTC has completely redesigned the UI to suit a tablet’s 1024 x 600 display, with a new 3D homescreen complete with floating widgets. In landscape orientation, icons are arranged into a carousel, while in portrait orientation – which HTC user experience manager Drew Bamford tells us the company expects most users to favor, given the Flyer’s compact, notepad-scale dimensions and option of two-handed stylus use – there’s a new 3D grid of apps.

The HTC Flyer may not run Android 3.0 Honeycomb out of the box – HTC says that “soon after” launch there will be a Honeycomb OTA update, and the company assured SlashGear that the timeliness of that update shouldn’t be impeded by carrier modifications – but it still gets dual-pane apps of HTC’s own making. There’s multi-pane browsing, calendar, email and address book, and, perhaps frustrating some would-be users, even when Honeycomb arrives, like HTC’s smartphones there won’t be a way to turn Sense off (short of flashing a custom ROM, of course). 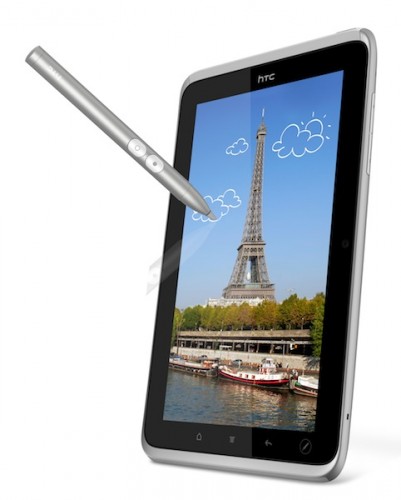 Third-party developers won’t be left out of the Flyer’s unique stylus use, with HTC hoping to quickly release the necessary HTC Scribe Technology driver to allow other apps to take advantage of the dual-mode touchscreen. HTC isn’t saying which company provides the stylus technology, though Bamford did tell us that they’d auditioned “pretty much them all” before settling on the system that best fit with the existing touch panels the company uses. To apps themselves, the nib is presented as another touch point, albeit coded as a different type, so apps can respond differently to the stylus and a fingertip touching the same controls. The finger will still reign supreme for general use, however, with the stylus not expected to be used for navigation. Finally, there’s a new content drive that will see HTC put OnLive streaming gaming and a “Watch” app for streaming movies and TV on the Flyer.

All that software magic is wrapped in a unibody chassis combining matte-finish aluminum and sturdy white plastic. There are front and rear cameras, a 4,000 mAh battery and a custom microUSB port that ensures not only backward compatibility with regular accessories but HTC’s new high-power charger. Battery life is tipped at a whopping 820 to 1470 hours of standby – that’s over 61 days – while video playback is up to four hours. The first Flyer units will have integrated HSPA+ connectivity, albeit for data only, while a WiFi b/g/n-only version will follow “pretty soon” after. There’s also Bluetooth 3.0, 32GB of internal storage and a microSD card slot.

They’ll be the first in a new range for HTC, too. “We’re pretty serious about this category,” the company told us at a pre-briefing last week, “we’re not just dipping our toe into the water.” While they wouldn’t be drawn on what sort of models are next on the roadmap, we’ve heard separately that a 9-inch slate is a strong possibility.

The Flyer will come with the stylus – that has two buttons, by default mapped to erase and text-select – and a pouch case with a loop for the pen itself. There’ll also be a range of accessories, including a second case that can turn into a stand, a desktop dock, and a Bluetooth keyboard for easier text entry. HTC isn’t talking specific pricing at this stage, but will say that it’s targeting the sort of “high end” tablets, like the iPad, that we’ve already seen on the market. The HTC Flyer should arrive globally in early Q2 2011.

“Clearly, smartphones have transformed our lives but as we observed how people use smartphones, computers and other technologies, we saw an opportunity to create a tablet experience that is different, more personal and productive,” said Peter Chou, CEO of HTC Corporation. “We are progressing down a path as an industry when people will no longer be in a single device paradigm, but have multiple wireless devices for different needs; this is the direction we are moving.”

Encased in a sleek aluminum unibody, the HTC Flyer tablet exudes the iconic style and build quality HTC is known for. It is also ultra-light, weighing as little as a paperback book, and compact enough to fit in a jacket pocket only. With a seven-inch display, lightning fast 1.5Ghz processor and high-speed HSPA+ wireless capabilities, the HTC Flyer tablet is perfect for those who have been waiting for a tablet that is both compact and powerful.

HTC Scribe Technology on the HTC Flyer tablet transforms traditional note-taking into smart note-taking by integrating natural onscreen writing with thoughtful and integrated innovations. A feature called Timemark enables you to capture the audio of a meeting in line with your written notes, so tapping on a word in your notes instantly takes you to that exact place in time in the audio recording of the meeting. Notes are also integrated with the calendar so when there is an appointment reminder you are automatically prompted with an opportunity to begin a new note or in the case of recurring meetings, to continue where the last meeting left off. In an industry first, the HTC Flyer tablet also features built-in synchronization with Evernote, the world-leading notes application and service.

Mobile Gaming with OnLive
HTC takes mobile gaming to an entirely new level by being the first mobile device in the world to integrate OnLive Inc.’s revolutionary cloud-based gaming service. OnLive is leading in the home gaming market by letting people play top video games on their televisions without the need to buy expensive gaming hardware or software. When integrated fully, the OnLive service will enable customers to pipe the OnLive service through the HTC Flyer tablet’s broadband wireless to their television sets, or let them play directly on the tablet. When integrated on the HTC Flyer tablet, people can play a variety of games, including hits like Assassin’s Creed II, NBA 2K11 and Lego Batman.

Availability
HTC Flyer will be available to customers globally during Q2 2011.