HTC Desire vs. Google Nexus One

One of the biggest announcements from MWC 2010 this past week has been the official debut of the HTC Desire, instantly dubbed the Google Nexus One with HTC Sense. With HTC the OEM parent behind both theirs and the Google-branded smartphone, would-be buyers (and potentially remorseful Nexus One owners) are already looking for the differentiating factors between the two; check out our head-to-head comparison after the cut.

In terms of specifications, the two devices are closer to twins than anything else. Each has a 3.7-inch WVGA AMOLED capacitive touchscreen, 5-megapixel camera with LED flash, Android 2.1 OS and a slimline candybar form-factor. The Nexus One is slightly thinner – though we’re talking less than half a millimetre here – most likely due to its receding chinline, versus the Desire’s moderate curve. On that chin is one of the more obvious differences: the Desire has an optical joystick, the Nexus One a more traditional trackball.

You have to delve inside the chassis to find the main differences. The Desire lacks both the active noise cancellation and the triband HSDPA/WCDMA of the Nexus One, making do with just dualband 900/2100. That means it’s not much use – at least in terms of high-speed cellular connectivity – outside of Europe and Asia; take the Desire to the US and you’ll be stuck using quadband EDGE or hunting for WiFi hotspots. HTC told us that dropping active noise cancellation was a price consideration, but that since it would only really affect voice dictation – which is currently exclusive to the Nexus One anyway – it wouldn’t make much of a difference to Desire owners. The Desire does have more RAM – 576MB versus the Nexus One’s 512MB – and come with a bigger, 8GB microSD card in the box (the Nexus One comes with 4GB), and arguably they’ll make more of a day to day impact than noise reduction. The Nexus One has Bluetooth 2.0+EDR, compared to the Desire’s 2.1+EDR, though it’s unlikely to make much of a difference generally.

It also looks like HTC have tinkered with the power management in the Desire, too, since with the same 1,400mAh battery the two smartphones manage significantly different runtimes. 3G standby for the Nexus One is up to 250 hours, compared to up to 360 hours for the Desire, though 3G talktime is up to 420 minutes for the Google device but 390 minutes for the HTC. Real-world use is obviously not solely comprised of voice calls, but it seems that if you want a handset for basic phone duties you should look to the Nexus One, whereas the Desire may be a better all-rounder. We’ll have to wait for a real-world review of the Desire to see if that’s actually the case.

Obviously, HTC’s main adaptation to the Desire is their latest Sense build, the combination UI and software environment we’ve seen stretch across their Android, Windows Mobile and, most recently, Brew based devices. It’s certainly one of the more attractive customisations out there, and it also adds extra social networking integration; Sense pulls in Facebook, Twitter and Flickr updates, injecting them into each Contact record together with combining them into a single Friend Stream feed that can be widgetized on the homescreen. It’s not the only widget, either; HTC arguably have some of the best mini-apps for homescreen use, such as a slick animated weather widget, integration with the SMS client, and their own Twitter client called Peep. Most recently, HTC added some extra visual gloss with the so-called “helicopter view”: a pinch-zoom gesture on the homescreen minimises all seven of the panes and displays them like Exposé on a Mac.

Like other OEM modifications, however, Sense has left HTC playing catch-up when it comes to core Android updates. Where basic Android phones have, in many cases, been updated as Google pushes out new official versions, OEMs have to rework their custom UIs to suit the changed platform; in the case of the HTC Hero, for instance, that means despite Android 2.1 having been available for some time now, the smartphone is still stuck on Android 1.5. HTC reckon the Hero’s update will arrive by the end of March 2010 (though availability and functionality will depend on whether it’s an unlocked or carrier-branded device) but you get the feeling that support for previous devices is less of a priority than developing new models such as the Legend, the Hero’s replacement.

Add in the fact that we’re already seeing – a couple of months in advance of the Desire’s official April 2010 release – hacked ROMs for adding Sense to the Nexus One, and for those willing to play the modification game the software differentiation is less of an issue. Of course, you could also say that the Desire will likely get unofficial Android update ROMs – complete with Sense – created by the mod community, before HTC themselves push out official releases. That’s one of the benefits of Android, certainly. Lacking, sadly, is native Exchange calendar support: while the Nexus One will pull in email and contacts from an Exchange server, you’ll need a third-party app to do the same for calendar entries. The Desire will support Exchange mail, contacts and calendar out of the box, and HTC have apparently been finessing their various apps to improve the experience over earlier versions of Sense.

As for price, it’s made more complex by the fact that, so far, Google aren’t selling the Nexus One directly in the UK or the rest of Europe. Instead buyers have to import it from the US, opening themselves up to import duty and local taxes. In the UK, for instance, the Nexus One will apparently cost around £410 to import ($634); HTC haven’t announced pricing for the unlocked Desire, but it’s already showing up on Expansys – among other online retailers – for £440 ($681). Of course, many people will choose to buy the Desire with a new service contract (not something you can do with the Nexus One outside of the US) thus subsidizing the initial cost potentially to the point of “free” in return for a mid- to high-tier monthly payment.

Importing a device also presents some aftersales issues, and while in a perfect world nobody would experience any problems with their smartphone, the reality is that complex devices can often have complex faults. A Desire owner would be able to contact their local HTC division and seek technical and customer support that way; currently Google’s Nexus One support is online-only for those outside the US (their recently launched telephone support is US-only).

In the end, both devices are at the bleeding edge of smartphone technology today, and neither is particularly likely to disappoint. The Android Market is gradually racking up alternative skinning packages, so even if Nexus One owners aren’t willing to hack a Sense ROM onto their device, it doesn’t mean they’re stuck with the basic Android 2.1 UI. Similarly, even if HTC drag their heels updating the Desire to a later Android platform release, the mod community have proved more than up to the task themselves for those owners prepared to roll up their sleeves and do some DIY tweaking. Both devices are solid, reasonably attractive and have great touchscreens. 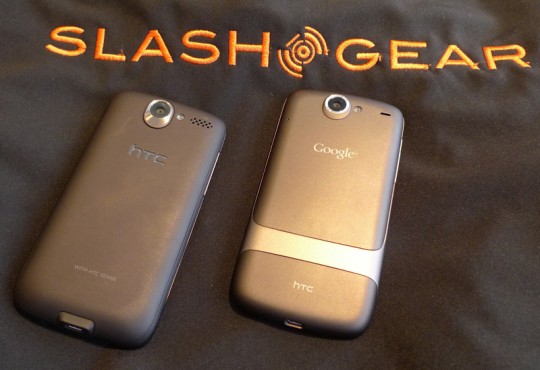 For those in the US, the Nexus One remains the obvious choice. The Desire lacks US 3G/UMTS support and HTC told us that they have no plans to release a specific version of the handset with that added in; that doesn’t mean, of course, that they won’t come up with a carrier-branded adaptation, similar to the Sprint release of the HTC Hero. Considering how long the Sprint Hero took to arrive though, versus the European release, we’d plump for the Nexus One ourselves.

If you’re in Europe or Asia, where the Desire’s 3G will indeed function, the decision is tougher: the Desire comes with the undeniably attractive Sense interface (which can be turned off for the basic Android 2.1 UI if you prefer) together with local aftersales support and the potential for slightly improved multitasking thanks to the extra RAM. If you travel to the US regularly, and want to use your phone’s 3G there, it’s worth bearing in mind that only the Nexus One will allow you to do so. Still, with data roaming fees as high as they are, whether you’d actually want to take advantage of that higher speed is another matter.

The HTC Desire’s market success already seems assured; at their press conference last Tuesday, HTC revealed that pretty much all the carriers in the regions they plan to release the smartphone were interested in offering it. There’s undeniably a huge interest in powerful, media-capable handsets. Until Google officially release the Nexus One in markets outside the US, we’d say most European/Asian buyers would be better off picking up the Desire come April 2010.