HTC has revealed its latest Android smartphone, the HTC Desire 600, a midrange dual-SIM handset with a quadcore processor set to go on sale in June. Packing Qualcomm’s 1.2GHz Snapdragon 200 quadcore with 1GB of RAM, the Desire 600 has a 4.5-inch Super LCD2 qHD display and runs BlinkFeed – launched on the HTC One – on top of Android and HTC Sense. That means custom news stories, interspersed with Facebook and Twitter updates, right on the homescreen.

Elsewhere, there’s an 8-megapixel camera on the back, with an LED flash and HTC’s ImageChip for improved processing; HTC uses an f/2.0 aperture, 28mm lens. The Desire 600 tops out at 720p HD video recording, however, not the 1080p we’re used to seeing. A front 1.6-megapixel camera is there for video calls.

The Desire 600 doesn’t get HTC Zoe, however, the combination stills and video burst system it made a headline feature on the One. Instead, it gets a pared-back Video Highlights system, which cuts together impromptu thirty second video compilations from your content, which can be edited, set to music and themes, and then shared online. 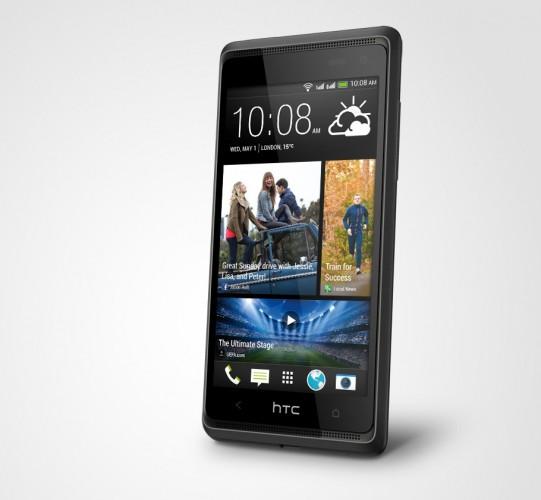 Inside, there’s HTC BoomSound speakers, positioned facing the front for the same sort of impressive audio performance as on the One, and Beats Audio processing too. Connectivity includes dualband HSPA and triband GSM/EDGE – no LTE – along with WiFi b/g/n and Bluetooth 4.0 with aptX.

There’s also NFC, GPS, and AGPS, while Russia and the EU will get GLONASS too. Internal storage is 8GB, with a microSD card slot for adding to that, and there are two SIM slots. HTC says both cards can be active at the same time, unlike some other dual-SIM handsets, so you can have calls come in on either account even when you’re using one of them. 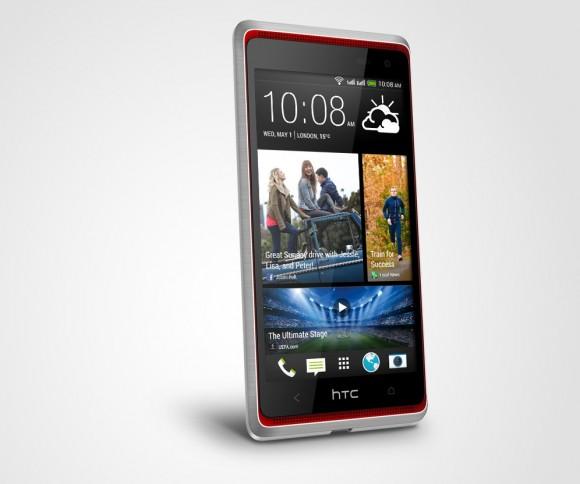 The 1,860 mAh battery is good for up to 11.1hrs of 3G talktime, HTC claims, or up to 577hrs of 3G standby. Unlike with the One, it can be removed and swapped out for another, too, something HTC customers have been vocal in requesting.

The HTC Desire 600 will go on sale in Russia, the Ukreaine, and select markets in the Middle East and Asia from early in June. No word on pricing or the possibility of a European or North American version at this stage.