The HTC Desire 200 has been officially revealed, the company’s newest handset and one that brings Android in a form-factor a little larger than a credit card. Fronted by a 3.5-inch HVGA touchscreen, and running Android on a 1GHz Snapdragon S1 processor, the Desire 200 obviously isn’t going to break any speed records or, for that matter, give those wanting the HTC One pause for thought.

The 1GHz chip is paired with 512MB of memory, and there’s 4GB of internal storage with the possibility of augmenting it with microSD cards by up to 32GB. Connectivity includes HSDPA support for up to 7.2Mbps downloads, network depending, as well as quadband GSM/EDGE; there’s also WiFi b/g/n and Bluetooth 4.0 with aptX support.

GPS and A-GPS are included, along with an accelerometer, proximity sensor, and ambient light sensor. HTC throws in Beats Audio, too, though you don’t get the BoomSound front-mounted speakers of the HTC One, unfortunately.

On the back, there’s a 5-megapixel camera with fixed focus, and an f/2.8 aperture 34mm lens. A VGA front camera does video call duties. HTC expects the 1,230 mAh removable battery to be good for up to 7.4hrs of 3G talktime or up to 821hrs of standby. 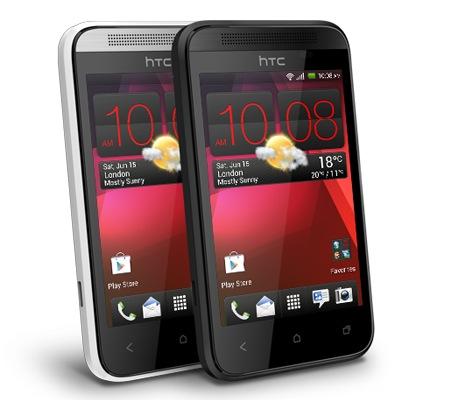 Overall, the target audience of the 107.7 x 60.8 x 11.9 mm, 100g handset is presumably more developing markets, though those on a serious budget looking for a prepay device will probably find it to their tastes too. You don’t get HTC BlinkFeed, only regular Sense, and nor is there HTC Zoe photography support; instead, users will have to make do with smile-shot and preloaded digital filters to differentiate their images.

HTC hasn’t availability for the new phone, though is has said it’ll be bundling a set of “our highest quality” in-ear headphones in the box. Whether they’ll also have Beats branding remains to be seen. According to AndroidBeat and the Taiwanese press release, the Desire 200 will be 4,990 New Taiwan Dollars ($167).