With a name that has both the words “desire” and “pro” in it, you would expect that this phone would at least be something worth desiring. If you thought that, then you probably don’t know HTC at all or at least the HTC that continues to struggle in the mobile market for the past years. The Taiwanese company hasn’t launched a flagship phone in almost two years and based on new information, it seems that the HTC Desire 20 Pro will hardly be it.

To be fair, HTC’s Desire brand has been used more on mid-range smartphones. But with the trend of mid-range phones these days, one could expect that somewhat better specs that are only a few steps behind premium. HTC, however, apparently didn’t get the memo.

XDA spotted the specs for what is allegedly the HTC Desire 20 Pro on Google Play Store’s Console. The good news, it has at least 6 GB of RAM, an FHD+ display, and will run with Android 10 out of the box. The bad news, those are pretty much last year’s mid-tier specs aside from the Android version.

Specifically, the Desire 20 Pro will be sporting a Qualcomm Snapdragon 665, a chip that was released in the first half of 2019. A lot of other chips have been launched since then, including the Snapdragon 675 and the newest members of the Snapdragon 700 family. In other words, HTC definitely had a lot of choices if it desired (pun intended) to actually make even a mid-range phone worthwhile. 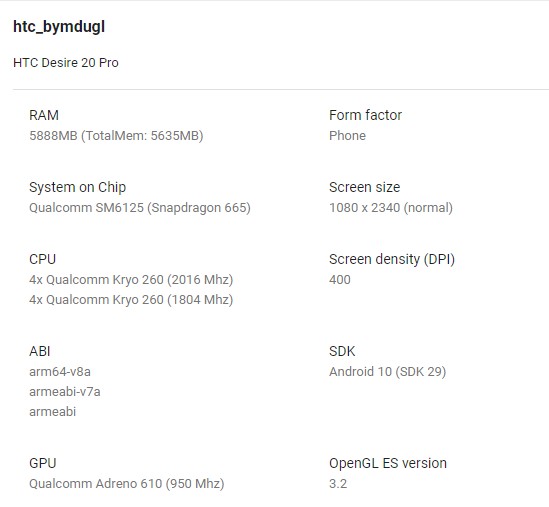 Those specs also immediately cross it out of the 5G race, which means the company has a different 5G phone coming next month. Whether it still plans to actually sell desirable phones in any market as its new CEO promised, we can only wait for its next official move.