HTC has announced its range of Windows Phone 7 smartphones, with models set to debut in Europe on October 21 and in the US on November 7.  The HTC 7 Mozart, HTC 7 Trophy and HTC HD7 will all launch in the UK as carrier exclusives, while the HTC 7 Surround will be an AT&T exclusive in the US.  Meanwhile a fifth device, the HTC 7 Pro, will arrive in Europe later in 2010 complete with a side-sliding QWERTY keyboard and broad network availability .  More details after the cut.

The HTC 7 Mozart will be an Orange UK and T-Mobile UK/USA exclusive, and has a CNC “unibody” chassis in the same theme as the HTC Legend.  It has a 3.7-inch WVGA LCD TFT capacitive touchscreen, an 8-megapixel camera with autofocus and a Xenon flash, and 8GB of onboard storage.  Like all of HTC’s Windows Phone 7 devices, it runs Qualcomm’s 1GHz Snapdragon QSD8250 chipset, together with WiFi b/g/n, 512MB of RAM and 384MB ROM (with a further 64MB on the Snapdragon).  HTC describes the 7 Mozart as their music-centric WP7 device. 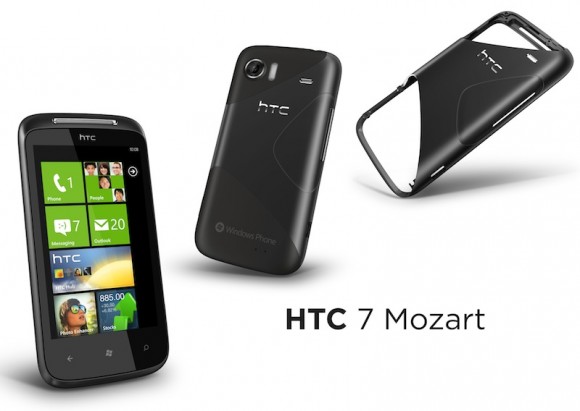 The HTC 7 Trophy will be an exclusive to Vodafone and what the company expects to be the “most aggressively priced” of the new Windows Phone 7 devices.  It has a 3.8-inch WVGA display and a 5-megapixel autofocus camera with LED flash, and is described as focused on gaming and entertainment. 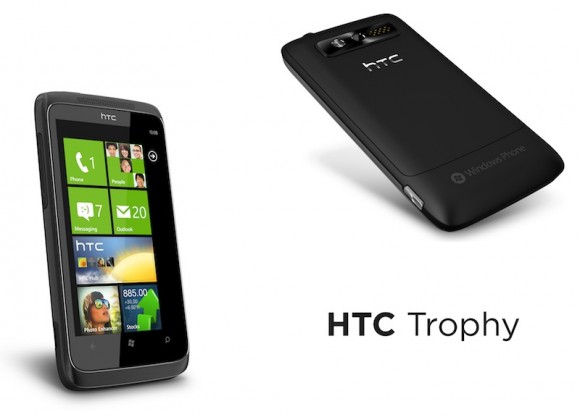 Finally for the European launch, the HTC HD7 (shown at the top) will be exclusive to O2 in the UK (and non-exclusive in the rest of Europe).  As the name suggests, the HD7 is the successor to the HTC HD2 and has a 4.3-inch WVGA touchscreen, a 5-megapixel autofocus camera with dual-LED flash and HD video recording, and a kick-stand for propping the smartphone up for easier video viewing.  Two SKUs – with either 8GB or 16GB of onboard storage – will be offered, with the HD7 billed as “a cinema in your pocket”. 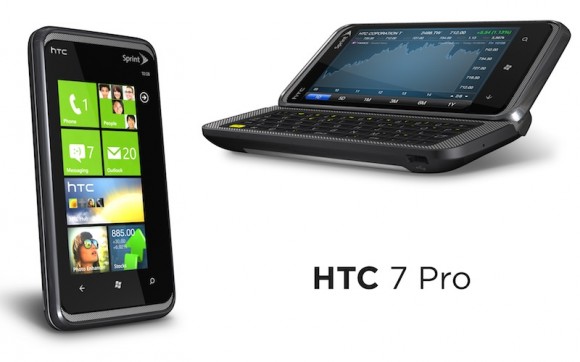 As for the HTC 7 Pro, the company has not yet revealed full details but we’re expecting the smartphone to have roughly the same specifications as the other three models only also toting a slide-out QWERTY keyboard for easier text entry.  It will be available in 8GB or 16GB versions, and be broadly available across European carriers before then end of 2010 and in North America – on Sprint and Rogers Wireless in the US and Canada respectively – early in 2011.  HTC is also promising a wider range of Windows Phone 7 designs from mid-2011 onwards.  More details on the AT&T HTC 7 Surround here.

All of the HTC Windows Phone 7 devices will have the company’s Sense-inspired Hub, complete with a custom Notes app – with Post Its that visibly age the longer you leave them – Lists, Flashlight app, Stocks/Shares, Weather, Photo Exchange, Sound Manager and “Love” (the latter being a bizarre “he loves me, he loves me not” flower-picking gimmick).  They’ll also support Dolby Mobile and Surround Sound.

Interestingly, none of the HTC Windows Phone 7 smartphones will be available SIM-free and unlocked at launch, unless you can persuade one of the exclusive carriers to sell you one.  That will undoubtedly change later on, but HTC refuse to be drawn on how long their exclusivity agreements are.

NEW YORK – October 11, 2010 – HTC Corporation, a global designer of smartphones and long-time Microsoft partner, today unveiled five new Windows Phone 7 smartphones: HTC 7 Surround, HTC 7 Mozart, HTC 7 Trophy, HTC 7 Pro and HTC HD7. This strong and diverse family of phones features Microsoft’s new Windows Phone 7 platform and embodies the stand-out design and innovation for which HTC has come to be known. Each new phone includes a variety of cutting-edge technologies and a series of unique HTC applications that can be accessed through the new HTC Hub that complements the Windows Phone 7 Hub and Tile experience.

“Windows Phone 7 is an entirely fresh mobile experience, on which HTC is excited to be going big. We see tremendous customer opportunities with the integration of Microsoft’s most popular services like Xbox LIVE and Zune,” said Peter Chou, CEO of HTC Corporation. “The value Microsoft is bringing to mobile customers around the world sets a new benchmark for the industry. HTC will be introducing five new HTC Windows Phone 7 smartphones at launch to support our customers with a broad variety of choice.”
“HTC has been a partner with Microsoft since we launched our first phones nearly a decade ago, and we couldn’t be more excited to continue this journey with the launch of Windows Phone 7,” said Andy Lees, President of the Mobile Communications Business at Microsoft. “Windows Phone 7 characterizes a new direction for Microsoft and its partners, and HTC is stepping up to support this in a significant way by bringing five new Windows Phones to market.”

Windows Phone 7
Windows Phone 7 has been carefully crafted to help people get more done in fewer steps with a unique Hub and Tile interface. The Windows Phone 7 Hubs offer quick and easy access to a person’s latest and most valuable information and include People, Pictures, Games, Music & Video, Office and Marketplace content. Windows Phone 7 also integrates with many popular Microsoft consumer services such as Xbox LIVE, Windows Live, Bing and Zune.

HTC Windows Phone 7 portfolio
HTC has brought its innovative design and creativity to its new Windows Phone 7 smartphone portfolio by embracing distinctive materials and unique design elements while providing an exciting set of cutting-edge features and technologies. With the new HTC Hub, HTC is providing an exclusive series of applications and utilities that include a new weather and stocks application and a new photo enhancer that enables a person to apply special effects before sharing photos with friends.

HTC 7 Surround
Whether it be gaming, movies or music, HTC 7 Surround is the ultimate multimedia device. With a unique slide-out speaker and integrated kickstand with integrated Dolby Mobile™ and SRS WOW HD™, the HTC 7 Surround delivers high-fidelity audio and virtual surround sound that enable people to share their favorite music and videos with their friends in style. No longer are they forced to use headphones for a great surround sound experience because the HTC 7 Surround speaker makes the listening experience natural and comfortable.
HTC 7 Mozart
Crafted from a single piece of anodized aluminum, the HTC 7 Mozart feels great in the hand and takes HTC’s unibody design aesthetic to the next level. The slim, solid and smart HTC 7 Mozart sounds as good as it looks and integrates Dolby Mobile™ and SRS WOW HD™ for high-fidelity, virtual surround sound. With Microsoft Zune integration, people can synchronize the HTC 7 Mozart with their PC, enabling them to take their music and video library with them wherever they go.
HTC 7 Trophy
HTC 7 Trophy harnesses the power of Xbox LIVE. Gamers will enjoy the speed and responsiveness of fast action gameplay supported by the phone’s high-performance 1GHz Snapdragon processor, and controlled through the vivid WVGA 3.8” touchscreen. High-fidelity, virtual surround sound – through SRS WOW HD™ – brings a rich audio experience whether the user is playing a game, watching a video or listening to their favorite music.
HTC 7 Pro
The development of the HTC 7 Pro was inspired by power users who want to combine the ultimate in business efficiency with the ability to take full advantage of their leisure time. The sleek handset slides opens and tilts to reveal a full QWERTY keyboard for fast, comfortable typing, while productivity features such as the ability to sort, scan and manage Outlook email, open and edit the latest Office documents on the phone and keep track of the markets with HTC’s stocks application, offer new ways to maximize the business day.

HTC HD7
HTC HD7 owners can enjoy their favorite videos and movies in cinematic-style thanks to the large 4.3” high-resolution screen, while its kickstand allows them to sit back and enjoy the action handsfree. For those who refuse to compromise on their mobile gaming experience, the HTC HD7 realizes the power of Xbox LIVE, bringing gameplay to life in a way that takes console gaming beyond the home.
Availability
The five new HTC smartphones will be available through mobile operators and retailers across major European, Asia-Pacific and North American markets from late October.

About HTC
HTC Corporation (HTC) is one of the fastest growing companies in the mobile phone industry. By putting people at the center of everything it does, HTC creates innovative smartphones that better serve the lives and needs of individuals. The company is listed on the Taiwan Stock Exchange under ticker 2498. For more information about HTC, please visit www.htc.com.