HP is taking on Apple’s MacBook Pro and Dell’s XPS 15 with its new ZBook Studio laptops, promising desktop workstation performance in oddly portable packages. The two new machines pack Intel’s 8th Generation chips – up to Xeon CPUs, in fact – and lashings of speedy SSD storage, with the biggest choice coming down to how you like your hinge.

Multiple screen options are on offer, too, but the one you probably want is a 15.6-inch DreamColor panel, with 4K 3840 x 2160 resolution, an anti-glare coating, Gorilla Glass 4, and touch support. NVIDIA Quadro P1000 graphics with 4 GB of dedicated GDDR5 memory is included. With a Wacom AES pen, there’s 4,096 levels of pressure support and tilt recognition.

Not bad, indeed, for something 20.4mm thick and 4.9 pounds. HP says the ZBook Studio x360 G5’s battery should be good for up to sixteen hours, too – though probably not if you hammer that Xeon and Quadro, we suspect – and it’ll get from zero to 50-percent in half an hour.

If you don’t need the 360-degree hinge, meanwhile, there’s the HP ZBook Studio G5. That saves some bulk compared to its x360 sibling, but still gets the Xeon chips and NVIDIA graphics. It also boasts the world’s brightest 4K laptop display, with a hefty 600 nits of brightness. You get the same battery life as the convertible, too, in a package that’s 18.9mm thick and 4.4 pounds. 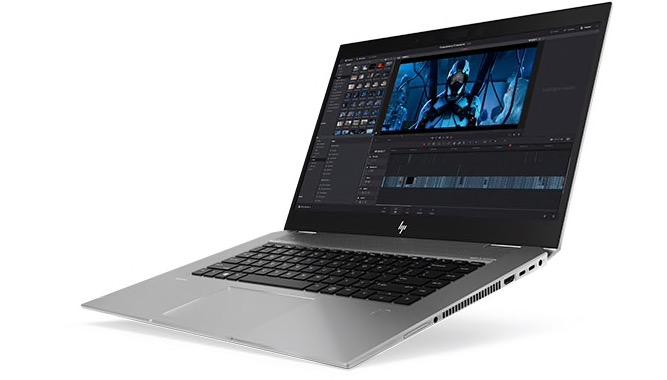 Both versions pack the same collection of ports. There are two USB 3.0, an HDMI 2.0 output, headphone/microphone combo, and two USB 3.1 Type-C with Thunderbolt 3 support. You also get an SD card reader. Inside, there’s WiFi 802.11ac and Bluetooth 5.0, with NFC an option. Windows Hello support is courtesy of a 720p camera, and there are Bang & Olufsen dual stereo speakers and a dual array digital microphone.

HP is upfront that its target is customers who might ordinarily go for a MacBook Pro or, if they’re Windows 10 fans, a Dell XPS 15. The 600 nits of the new ZBook Studio G5 models is 20-percent brighter than the Retina screen on Apple’s laptop, and 50-percent brighter than Dell’s panel, so HP claims. Meanwhile the Xeon means you’re looking at 35-percent more processing power than the MacBook Pro.

Of course, you’ll pay for that power too. The HP ZBook Studio x360 kicks off from $1,499 and the ZBook Studio from $1,299 when they go on sale from May 2018, but figure on those numbers rising rapidly if you want Xeon processors inside.