There’s something to be said about a tablet with netbook internals. And, while we wish they were good things, it generally isn’t. Take, for example, the HP Slate, which was just nabbed by the folks over at Connecti.ca. While they haven’t had it long enough to actually get a full review up, they’ve got plenty of pictures of their hands-on time with the tablet, plus a mini-review to satiate anyone actually interested in the tablet from HP. What’s their verdict? Meh.

That’s right: meh. But, that may be what happens when you only show off your tablet in crazy promotional rendered videos. First and foremost, let it be known that they are first and foremost comparing this tablet to the iPad. There’s no way around that, we imagine, but we’re kind of shocked at how explicitly they compare the two tablets. Secondly, the HP Slate just doesn’t win. They do note that the Slate has some good points, such as USB ports, an HDMI dock, and it has a built-in camera. These are great features, but perhaps not when they’re bundled with the HP Slate. 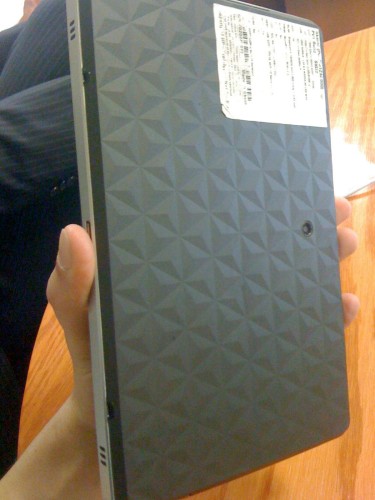 Because they’re quick to point out the bad, which, ironically, some say are the tablet’s good parts. For example, you are getting a “full” Operating System in Windows 7, which means you get Flash Player, along with all the other cool things: like downloading other browsers, and whatever else you want. The trouble is, that means you have a “long and annoying load time Operating System.” Ouch. Right after that, they go on to say that the HP Slate is simply not a competitor to the iPad. End of story. Their official verdict, again, is: meh. Check out the gallery below.