HP has what it calls “The Machine”, practically a researcher’s plaything for experimenting on emerging computer technologies. One such technology that is already quite close to becoming a reality is HP’s “memristor”, a portmanteau of “memory” and “resistor” that could forever blur the boundaries between non-volatile disk storage and and volatile RAM.

The concept of a memristor is hardly new but largely unknown to those outside this particular field of computer science and engineering. Conceived in 1971 by Professor Leon Chua of UCB, a memristor is like a resistor except that the amount of resistance it uses on a current depends on the intensity and direction of the current that passed through it. To keep it short, it means that a memristor’s resistance is basically “writable”, making it more akin to computer memory, RAM or otherwise. But just as important is the fact that the memristor can actually hold on to that current even without power, unlike RAM and more like disk storage. It wasn’t until 2008 that the first though somewhat contentious real-world implementation was made by HP Labs senior fellow R. Stanley Williams.

The implications of this relatively new technology can only be fully understood with a glimpse into how computers treat memory, files, and programs. Users will store files and install programs on more or less permanent storage like hard drives or SSDs. The computer, however, cannot work directly on files while stored in this type of storage because reading from and writing to them is extremely slow, at least for a computer. What the operating system does is load programs and the needed files into RAM, which is exponentially faster in such operations than even SSDs. But there are still some bottlenecks involved. RAM have smaller densities than disk storage, so you can only fit in so much. There will be times when the OS will have to fetch or dump files to disk, and that is, again, slow. But even more than that, RAM is what is called volatile memory. Any data that it holds is lost when there is no electricity flowing through it. 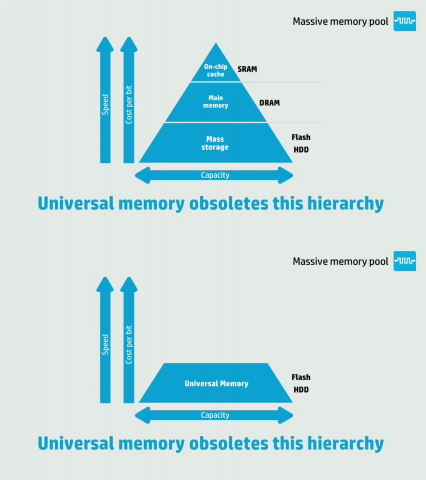 HP Labs’ memristor, then, tries to address those two issues. The first has already been mentioned. A memristor requires no electricity to maintain its data, turning what is technically “main memory” or RAM into a more permanent storage device. But that won’t exactly be useful if it remains at the same data capacity that RAM has today. Fortunately, the memristor is also denser than DRAM, the current RAM technology used for main memory. According to HP, it is 64 and 128 times denser, in fact. You could very well have a 512 GB memristor RAM in the near future.

That future, sadly, will have to wait a bit. This new type of memory will necessitate not just a change in our mental paradigms, but also a change in computing paradigms. In particular, it will require a change in how operating systems work and handle memory, something that cannot really happen overnight. Of course, there isn’t yet any rush to have a commercial memristor out immediately, except for HP that is. HP’s ambitions for this kind of “universal memory” is tied into its Machine experiment, which is, unsurprisingly, tied to the company’s server business. It envisions this technology to be used for cloud storage and server storage, but it is also dreaming it for mobile devices as well. HP envisions that memristors, and The Machine itself, can be scaled down to power future generations of mobile devices, allowing you to store your whole life inside a single smartphone. An idea that is both incredible fascinating and, on some level, terrifying as well.