Honda is rolling out the first car with Level 3 driver-assistance, with the new Legend capable of piloting itself on highways without demanding human supervision, though don’t expect to be overtaken by an autonomous sedan any time soon. The new Legend with Honda SENSING Elite is only being offered in Japan currently, with the automaker taking a very cautious path to deployment.

For a start, it’ll be only offering leases of the car, not outright sales. That’s one route by which automakers control where their vehicles end up, since at the end of the lease they can reclaim the car. It’s also limited in production to just 100 examples.

Still, that’s not to say this isn’t an impressive step, given the challenges automakers have faced in getting Level 3 autonomy to market. Currently, all driver-assistance systems available on vehicles you can buy are Level 2 compliant at best. That is to say, they can assist with the act of driving, but they still demand human supervision. That’s even in the case of technologies like GM’s Super Cruise, which allows drivers to keep their hands off the wheel. 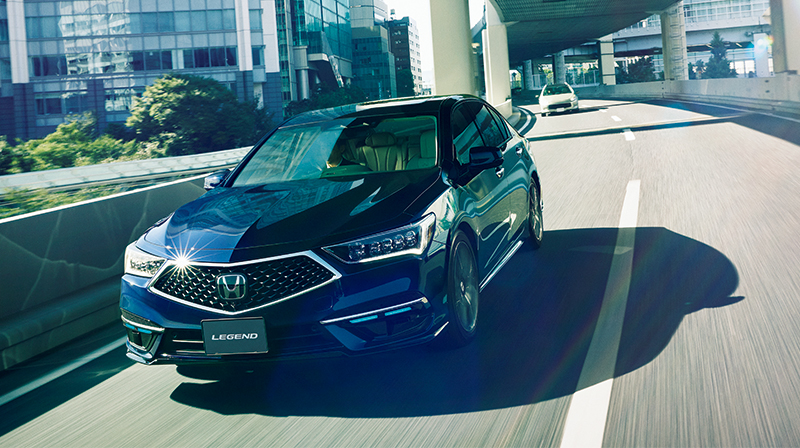 At the other extreme, Level 4 and Level 5 absolve the driver of all responsibility when the car is operating in autonomous mode. The distinction is that Level 4 vehicles can operate in a set of circumstances but not necessarily all; inclement weather, for example, might ground such AVs. Level 5 cars, however, should be able to drive themselves in all conditions.

Level 3, though, falls somewhere in-between. It means autonomy in certain situations, but manual driving outside of that. In the case of Honda SENSING Elite, that’s reserved for what the automaker is calling Traffic Jam Pilot.

There, the Legend can handle speed and steering while monitoring the surrounding traffic. “While the vehicle is under the control of the system, the driver can watch television/DVD on the navigation screen or operate the navigation system to search for a destination address,” Honda Japan says, “which helps mitigate driver fatigue and stress while driving in a traffic jam.”

Honda is using 3D HD maps and a high-precision GPS sensor to pinpoint the Legend’s position on the road. Various cameras deliver 360-degree awareness of other road users, Honda says.

Outside of those conditions, however, the Legend will be a Level 2 vehicle. It’ll support hands-free adaptive cruise control with low-speed follow and lane-keeping assistance – effectively holding the car in lane, and keeping pace with traffic ahead – much like Super Cruise or Ford’s upcoming Active Drive Assist, and will also be able to automatically change lanes once the driver uses the turn signal. However the human behind the wheel will still be responsible for the car’s behaviors, unlike during periods when Traffic Jam Pilot is active. A camera inside will track driver-attention, to ensure they’re looking at the road.

Arguably the biggest challenge for Level 3 systems is the handover between human to car, and then back again. Honda is using lights integrated into the steering wheel, as well as at the top of the navigation display, and even integrated into the glovebox, to maximize the chance of catching the driver’s attention regardless of where they’re looking.

Otherwise, this is a well-equipped Legend for the Japan market. It’s based on the Hybrid EX trim, with SH-AWD, a 3.5-liter V6, and 7-speed DCT gearbox. Outside, there’ll be special badging to indicate the Level 3 system – required by the Japanese Ministry of Land, Infrastructure, Transport and Tourism (MLIT) – and special alloy wheels. Pricing is 11 million yen (approx. $102,000).