HomePod multi-user support is finally on the way

Apple packed a lot of announcements into its iPhone reveal event yesterday, but one device that didn’t get a shoutout is the AirPod. Despite that, it seems that Apple still has big plans for the speaker throughout the rest of the year. In all, there are three incoming features for the AirPod, and one in particular is something users have been asking for since the HomePod launched.

If you visit the HomePod page on Apple’s website, you’ll see that the company has added a few blurbs about incoming features. As discovered by Apple Insider, these new features kick off with the release of iHeartRadio, Radio.com, and TuneIn functionality on September 30th.

Using those apps, which are compatible with Siri, Apple says that HomePod owners will be able to access more than 100,000 radio stations. Once those radio apps are live, we’ll also see support for ambient sounds hit the HomePod at some point this fall. “Relax with Ambient Sounds – featuring the soothing sounds of ocean waves, forest birds, rainstorms, and more,” Apple’s blurb reads. 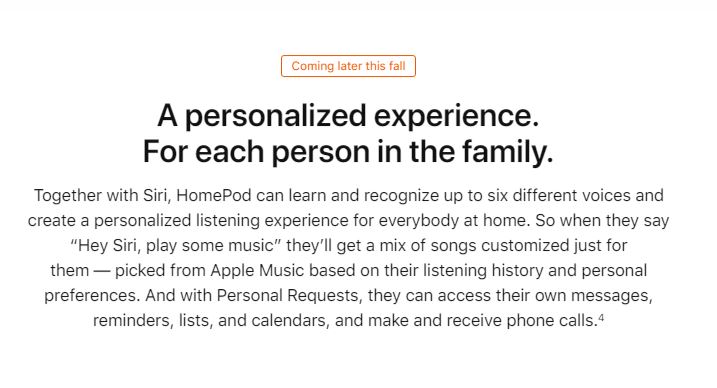 The final new feature hitting the HomePod this fall is definitely the biggest of the three: multi-user support. Using Siri as the basis for multi-user support, HomePods will soon be able to “learn and recognize up to six different voices and create a personalized listening experience for everybody at home.” As the description says, this means that each individual user in your house will be able to say “Hey Siri, play some music,” and hear music that matches their preferences and listening history.

Users will also be able to tap into Personal Requests and access messages, reminders, calendars, and lists through HomePod, with support for making and receiving phone calls as well. Like ambient sounds, multi-user support will be going live later this fall, with no specific release date revealed yet. We’ll keep an eye out for more details, so stay tuned.