This week Game of Thrones is getting its own unofficial keyboard with Hodor. This keyboard was born this week in the wake of the introduction of Swift, Apple’s new mobile operating system developer language. You’ll find two iterations of this keyboard out in the wild – at least two, at this point – another appearing made by a completely different developer for Android.

You’ll find the fellow named jonomuller creating the Hodor keyboard for iOS 8. This keyboard contains a single key, and jumps off Apple’s newly reformed attitude toward 3rd-party keyboards for iOS for the iPhone, iPad, and iPod touch. One key, all Hodor. 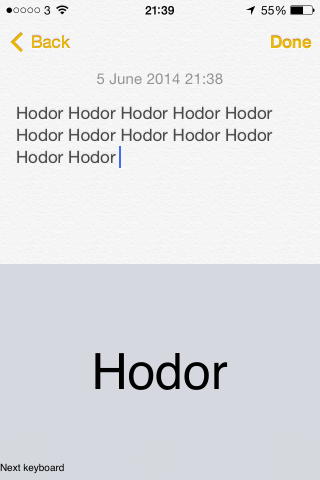 The Android version of the Hodor keyboard will cost you a buck. This keyboard is developed by RichieApps and will also bring you Hodor. One key, every press a Hodor. You might even get a capital HODOR here and there if you’re lucky.

This is all well and good, and goes to show you that when a show becomes popular enough, all things Hodor will happen. Hodor is a character in the show Game of Thrones, a show which has recently become the most popular HBO show of all time. Have a peek at a collection of Game of Thrones posts in the timeline below for more information!