Hitachi has unveiled its Ropits single passenger robot car, which looks like a Fisher Price Cozy Coupe for adults and does the driving all on its own. The name and style prompt one to think of a science fiction contraption, but it’s the vehicle’s autonomic functionality that truly brings the idea of “futuristic” to the forefront.

Ropits stands for Robot for Personal Intelligent Transport System, and was designed to aid those who find walking difficult. The idea is that Ropits vehicles could be outfitted in a city, for example, and hailed via a computer or kiosk of some sort positioned in various places around town. The robotic car will retrieve the passenger and whisk him or her away to their destination.

The tiny car achieves its autonomic functionality via a variety of navigation tools, including GPS, a gyro sensor, and laser sensors. The gyro will help the car remain stable on uneven roads, while the laser sensors will be used to judge distance from items. The GPS, obviously, will allow the passenger to tell Ropits where to go. 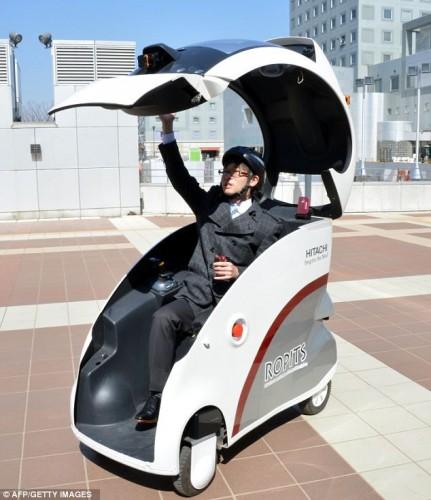 A quick glance at the vehicle could prompt concerns that it may be unstable with such a small base, but those concerns have been addressed by Hitachi, which designed the Ropits so that each wheel is controlled via what it calls active suspension, helping to keep things both stable and comfortable. What do you think of this little car? Let us know in the comments!