Scientists François Englert and Peter W. Higgs have jointly won the Nobel Prize in Physics 2013 for predicting the Higgs Boson, the particle – and its connected mechanism – which underlines the way all mass works in the universe. The pair took the award “for the theoretical discovery of a mechanism that contributes to our understanding of the origin of mass of subatomic particles,” the Nobel Prize committee announced today, “and which recently was confirmed through the discovery of the predicted fundamental particle, by the ATLAS and CMS experiments at CERN’s Large Hadron Collider.”

Higgs, currently an emeritus professor of theoretical physics at the University of Edinburgh, first suggested the existence of the particle back in 1964. The boson, later named after the physicist, enables other fundamental particles to acquire mass; without it, all particles would be expected to travel at the speed of light.

Theoretically predicting the Higgs boson and actually identifying it in practice were two very different things, however, and the scientist did not expect it to be confirmed in his own lifetime. All that changed back in March, when testing with the CERN Large Hadron Collider indicated the presence of the particle in sub-atomic proton collision testing. 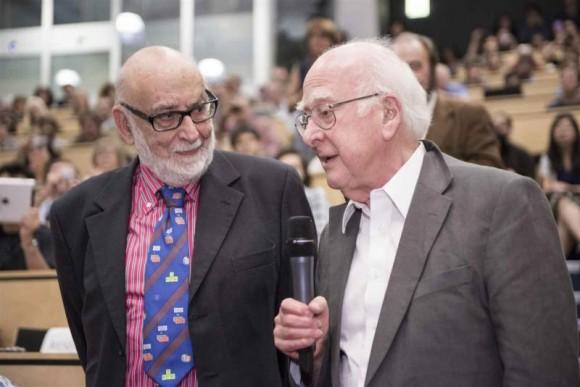 “I am overwhelmed to receive this award and thank the Royal Swedish Academy” Higgs said in a statement today. “I would also like to congratulate all those who have contributed to the discovery of this new particle and to thank my family, friends and colleagues for their support. I hope this recognition of fundamental science will help raise awareness of the value of blue-sky research.”

As for Englert, he actually authored a paper on the mechanism just ahead of Higgs, independently, in 1964. Together, the “Brout-Englert-Higgs (BEH) mechanism” they postulated “explains how the force responsible for beta decay is much weaker than electromagnetism,” CERN explains, “but is better known as the mechanism that endows fundamental particles with mass.”

Using the highly sensitive particle detectors at the Large Hadron Collider, the ATLAS and CMS teams performed a huge number of tests impacting protons together at speed.

“The Standard Model describes the fundamental particles from which we, and all the visible matter in the universe, are made, along with the interactions that govern their behaviour. It is a remarkably successful theory that has been thoroughly tested by experiment over many years. Until last year, the BEH mechanism was the last remaining piece of the model to be experimentally verified. Now that it has been found, experiments at CERN are eagerly looking for physics beyond the Standard Model” CERN

“I’m thrilled that this year’s Nobel prize has gone to particle physics,” CERN Director-General Rolf Heuer said in a statement. “The discovery of the Higgs boson at CERN last year, which validates the Brout-Englert-Higgs mechanism, marks the culmination of decades of intellectual effort by many people around the world.”