When Halo Infinite’s campaign launches around the world

343 Industries announced on Twitter today that the Halo Infinite campaign will be available beginning at 10 AM PST on December 8th. That seems to be a global release time for Halo Infinite, which sadly means that many of our friends on the other side of the Pacific will not get the game until December 9th, despite the game’s December 8th release date. 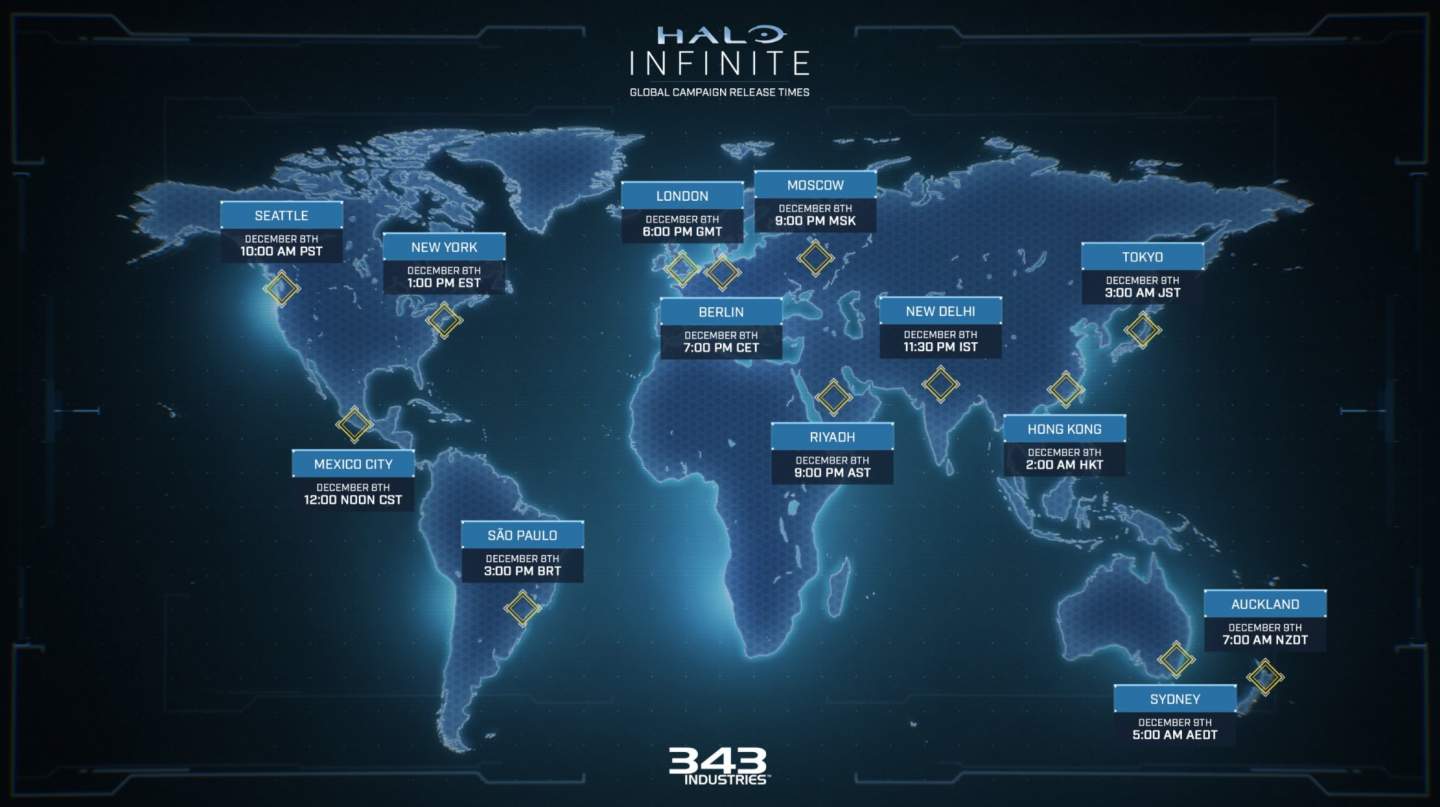 You can see when Halo Infinite launches in your region with the map above. For example, a 10 AM PST launch time means that the game will be available at 1 PM EST on the US East Coast, 6 PM GMT in London, 3 AM JST on the 9th in Tokyo, and 5 AM AEDT on the 9th in Sydney. Sorry folks, but it seems like there won’t be any midnight launches this time around.

While 343 hasn’t publicized any concrete details about pre-loading, it does seem that the campaign can be pre-loaded on PC through Xbox Game Pass. To pre-load the game, open up the Xbox app on PC, find Halo Infinite, and you should have the option to pre-install the game. Halo Infinite‘s campaign requires 61.8GB of free space, and it seems that you’ll need to install the game’s multiplayer mode – which is approximately 25GB on its own – in order to install the campaign.

There doesn’t seem to be a pre-load option for the console version of Halo Infinite‘s campaign – at least not yet. There’s a chance that could change, but considering that we’re now a day out from release, it doesn’t seem likely that it will.

READ MORE: Halo Infinite reviewSlashGear’s review of Halo Infinite went live yesterday, and we found that the game’s new semi-open world design is a largely successful one. The open world objectives give players a way to break up the action of the story missions, and while they do get a little bit repetitive in the later stages of the game, Halo Infinite sets a good foundation for future Halo campaigns.

Of course, we already knew that multiplayer gameplay was solid, but there are still some issues surrounding monetization, battle pass progression, and mode variety that need to be ironed out in the coming days and weeks. Halo Infinite‘s campaign launches tomorrow, December 8th, for Xbox One, Xbox Series X, and PC.