Before I ruffle too many feathers by calling the 2016 Mustang Shelby GT350R Ford’s fastest ‘stang yet, let me set some parameters. Was the 2013 Shelby GT500 with 662hp quicker to 60 mph and through a quarter-mile? Yes. Could that car out-maneuver the GT350R? Not a chance. Set those two vehicles against one another around any non-oval track in the world and the GT350 would spank its sibling.

In many ways, automotive enthusiasts have the never-ending rivalry between Mustang and Camaro to thank for the ultra high performance muscle cars we see today. What once was a horsepower war has now become a battle for faster lap times. It’s a freaky world we live in where a Camaro (in Z/28 guise) can match a Porsche 911 GT3. And the odd matchups will become more bizarre, especially since Ford’s new Shelby Mustang has exceeded even the Camaro Z/28’s lofty performance threshold.

To understand just how much better the GT350/R is than both the track-honed Camaro and the solid rear-axle Mustang Boss 302 that came before it, we joined Ford Performance for a few laps at Buttonwillow Raceway in California. 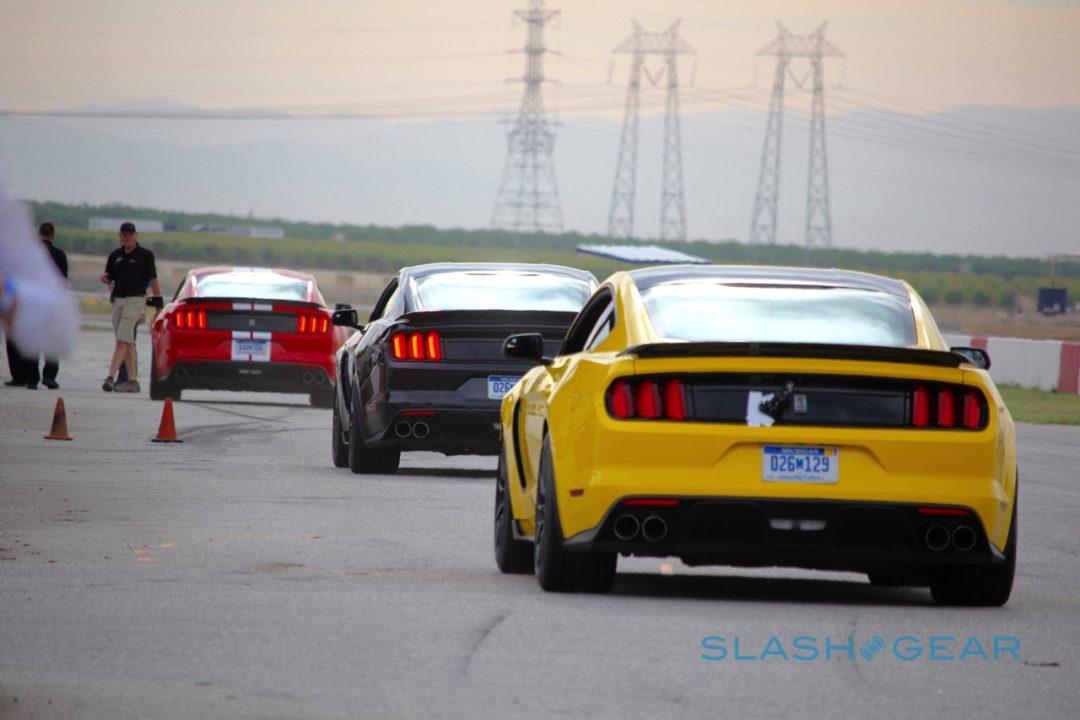 Before diving into how the car handled, let’s recap what sets the GT350/R apart.

While it’s true that Shelbys of years past owe their performance to their engines, the GT350 is only partly defined by its powertrain, which is more impressive considering this is one of the best motors Ford has ever built. 526hp and 429 lb-ft of torque roar from a brand new 5.2-liter flat-plane crank V8 motor. No forced induction, no sloppy seconds, just the most powerful naturally aspirated motor Ford has ever produced.

For those unfamiliar with flat-crank motors, in very simple terms, they are lighter, rougher, and faster revving than cross-plane crank designs. These engines are more commonly found in motor sports applications where ride quality matters far less than outright performance. In the Shelby GT350/R, this translates to an 8,250 rev limiter and one of the most vicious sounds of any production vehicle. 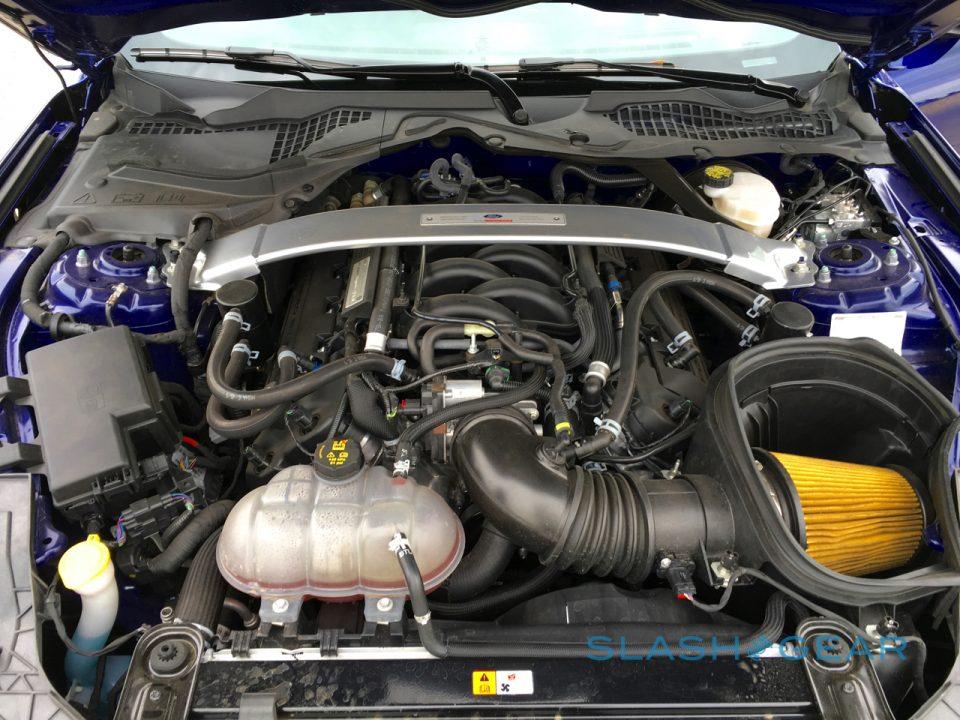 Both the standard GT350 and more aggressive “R” designation produce the same power, use the same 6-speed Tremec manual transmission, and route their horses to the rear wheels through a Torsen limited-slip differential. Both cars also employ Ford’s MagneRide magnetic dampers, 15.5-inch front brake rotors with 6-piston Brembo calipers, 14.9-inch rear discs with 4-piston calipers, and lowered ride heights. The major differences between the standard GT350 and R come down to 130 pounds of weight savings. For example, the GT350R salvages an incredible 15 pounds per wheel thanks to carbon fiber construction. 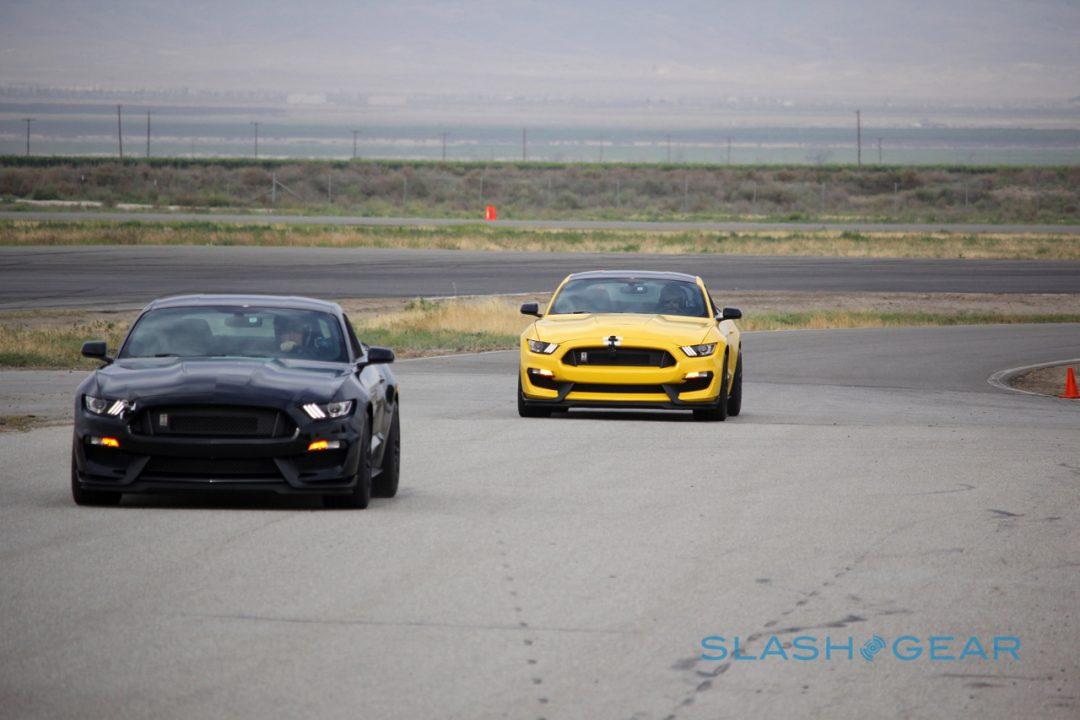 Visually, you can pick out the R from its larger chin splitter, carbon fiber rear wing, red interior accents, and lack of rear seating. Audibly, you’ll hear the R coming from farther off without its exhaust resonators. Experientially, the R’s ability to induce stronger G forces drains the blood from your brain quicker. At the dealer, the differences between the vehicles will amount to an $8,000 premium.

Now to how they performed on track. While three laps is hardly enough to draw firm conclusions about how a vehicle handles—and we’ll have more significant time with the GT350 next month—it was enough to see Ford’s engineering brilliance shine through.

Buttonwillow Raceway is a fairly technical track, with several potential layouts. Ford’s Track Tour had us take an abbreviated route covering just under two miles that included a dozen turns and one quarter-mile straightaway. 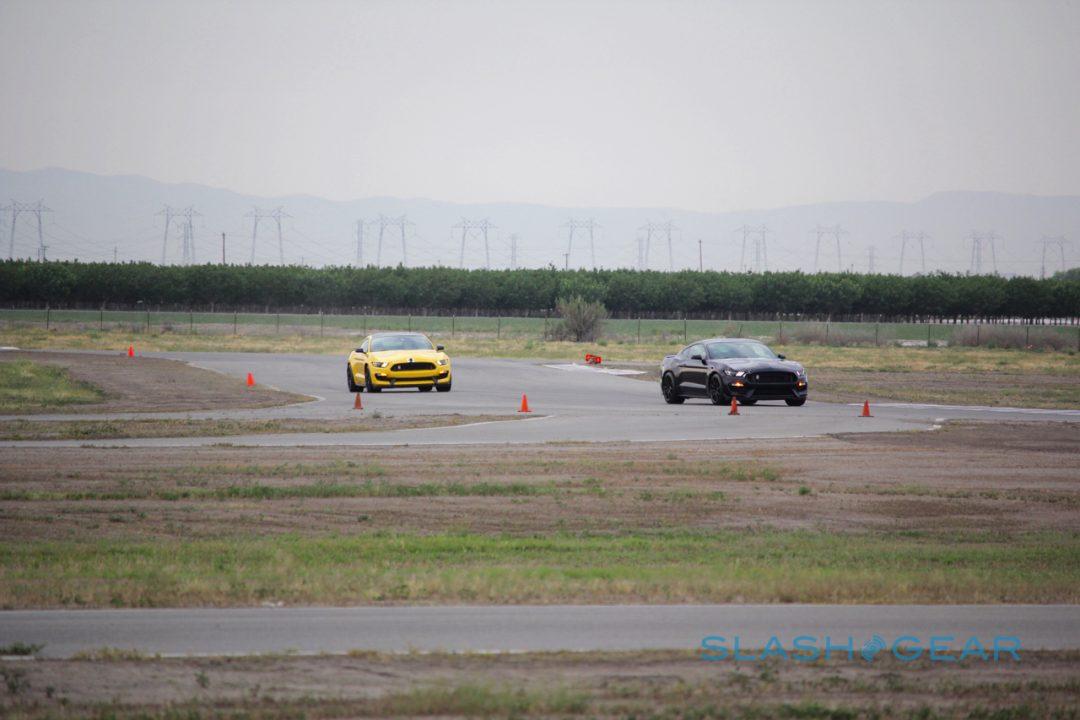 “Your brain will tell you to shift at 6,500 rpms, but don’t,” cautioned the Ford Performance Racing instructor. Sure enough, seconds later my hand and left foot subconsciously made for the gear lever and clutch pedal. Fortunately, I was able to resist the urge to shift until the tach had climbed to a more respectable 8,000 rpms and the engine was given a chance to howl into the crisp morning air. What a rush – unlike the 700hp Hellcat, power delivery was controllable, yet still tremendous.

Thankfully, the Brembo brakes were equally mighty, because I was rapidly approaching the first corner. With a hint of nose dive, the GT350 put the kabosh on forward motion before angling into the bend. Steering inputs were immediately communicated to the front wheels while the MagneRide dampters tightened, keeping the body flat through the corner. As I spoon-fed power to the rear wheels, the Michelin Pilot Super Sports gripped where previous Shelbys would happily break traction.

As I began to grasp the GT350’s limits, speed through corners grew and braking distances shrunk, but the Mustang refused to show even the smallest sign of stress. By the third lap, I’d finally been able to break the standard GT350’s tires loose with a heavier right foot, but the ultra sticky Pilot Sport Cup 2 rubber on the R wouldn’t budge once up to temperature. Even when the GT350 would hang its tail out, the release was progressive and completely manageable. 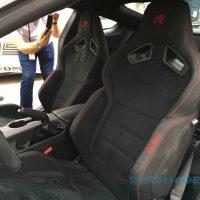 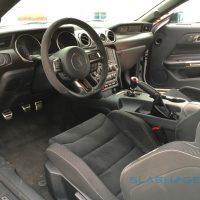 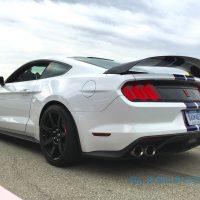 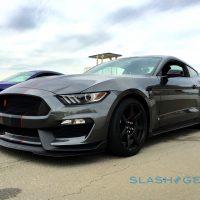 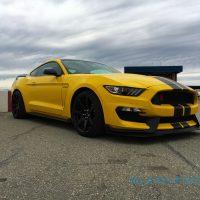 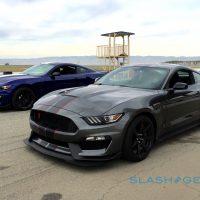 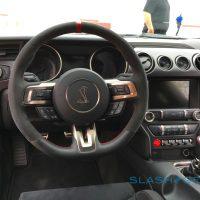 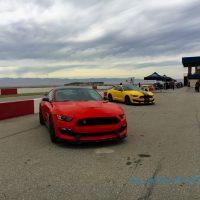 Before I was forced to part with the Shelby, my instructor hopped in the drivers seat for a final lap. Though I had glimpsed the GT350’s potential, my time as a passenger truly opened my eyes (and tightened my sphincter) in reaction to its capacity for speed. While maneuverability within corners and its power between corners was extraordinary, the braking performance was most impressive. Where some supercars would have coasted straight off the track, the GT350 seemed to move the earth backwards to scrub speed before turns.

The fact that $60,000 grants you performance to rival some of the fastest cars in the world is confounding. Comparing the Shelby GT350/R to any preceding Mustang is like contrasting a Cheetah with a Dachshund. Sure, they can both run, but that’s where their similarities end.

No doubt Chevrolet’s next generation Camaro Z/28 will push the track performance envelope even further, but the GT350 may take the current edge as king of the muscle cars until then.