Here’s how to get OneDrive working again

It seems that Microsoft has painted itself into a corner with a move that doesn’t really have practical merit. At least not in the way the company has carried out the matter. Users of Microsoft OneDrive cloud storage solution suddenly locked out of their OneDrive shares mirrored on their local computers. All because Microsoft, without prior warning, suddenly decided that no filesystem is good enough for OneDrive other than its own proprietary NTFS.

Sure, there might be some technical advantages to using NTFS over something like FAT32 or even its exFAT descendant. NTFS is a more modern filesystem with modern features, like journaling, file permissions, and support for larger disk sizes and larger file sizes. Although the newer exFAT address the size concerns, many storage devices, particularly SD cards still only use FAT32. That, and for whatever reason, some users might prefer using FAT32 for some of their partitions or drives.

Microsoft has removed that choice for OneDrive users and did so in a very disrespecting way. Users who have set up OneDrive to sync on a storage that doesn’t use NTFS have suddenly found themselves unable to access their OneDrive there. And those just starting to link OneDrive to such a type of storage, like an SD card, will be prevented from doing so. 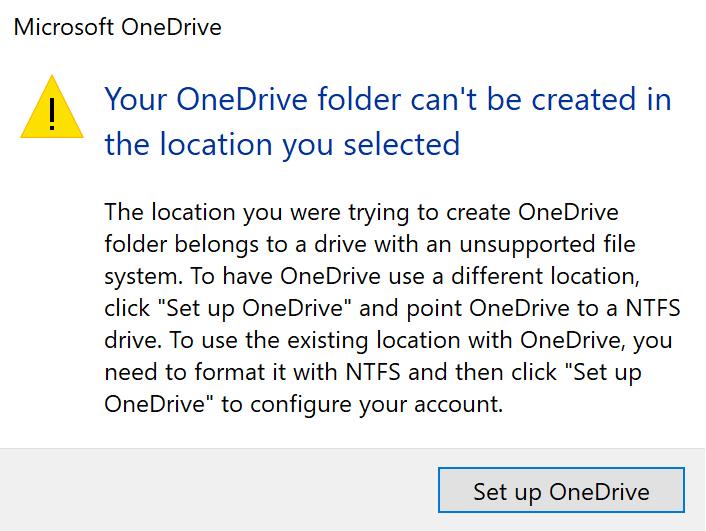 While it’s arguable why Microsoft would require NTFS for OneDrive, probably to take advantage of features like permissions and journaling, it could have taken a kinder route to make that known. It could have given users a warning and a grace period to make the necessary changes before flipping the switch. Perhaps they were worried users would suddenly decide to move away from OneDrive, not that this blunder isn’t going to cost them either way.

There is a quick and somewhat dirty way to regain access to your OneDrive files on a FAT or FAT32 drive. You can simply convert the drive to NTFS without the need for reformatting. First open a Command Prompt in Admin mode by pressing Win+X and selecting the appropriate menu entry. And then type in the command, substituting “drive_letter” with the correct one. WARNING: Be very careful with what letter you use

There are a few caveats here, the most important one being that this is a one-way street. Once converted to NTFS, you can’t go back to FAT or FAT32 without having to reformat the drive or partition. Second, if performed on an SD or microSD card, know that the card might no longer be readable by devices that don’t support NTFS natively, like some cameras and smartphones. As always, best back up the files on the drive first before undertaking the conversion.