Caffeine may be the fuel many of us rely on to get us motivated in the morning, but coffee as a social lubricant – thanks to a machine that refuses to brew unless you make a new friend – could force the shy out of their shells if they feeling thirsty. The Coffee Connector, handiwork of EDB Singapore, not only makes brewing a couple of cups into the spectacle it deserves to be, but will only do so if two people get together at the touchscreen and share some personal information first.

Just like in Starbucks, it first asks for names – they’re later printed onto customized cups. However, it also runs through interests and goals, before kicking off the actual brew.

That is probably worth the wait, too, with towers of bean-crunching cogs that feed highlander Coffee’s Supremo Blend through glassware worthy of Frankenstein’s laboratory before it’s served up through twin spouts at the front. Meanwhile, those waiting can presumably swap business cards, start hugging (at least going by EDB’s video, below), or begin a lifelong friendship. 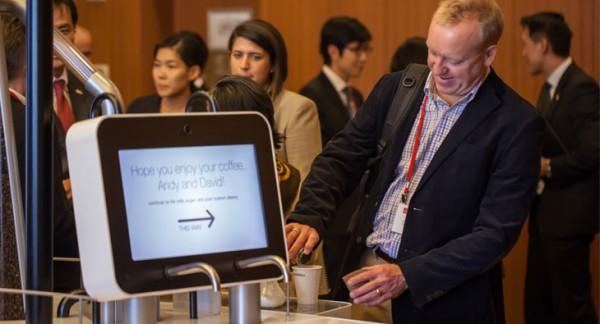 The goal isn’t so much to punish introverts by withholding their favorite drink if they don’t make eye-contact, but to see whether new business connections can be spurred on in non-traditional ways. The Coffee Connector’s first outing was at The Economist Big Rethink Conference in mid-March, where more than 200 pairs tried it out.

It’s not the only attempt to make coffee high-tech we’ve seen recently, though with slightly less open intentions. Keurig confirmed plans to add DRM to its 2.0 coffee pods so as to lock out unofficial suppliers, a move which prompted outrage from existing users.