Avenge “does something after (x) friendly minions die.” So if you’re the sort of player that depends on summoning a bunch of demons just to grind them up, this might be the keyword for you. For example the new minion “Bird Buddy” has Avenge (1): Give your Beasts +1/+1 (or +2/+2 if he’s golden.)

There’s a level 5 minion called Palescale Crocolisk that has Avenge (2) AND Deathrattle: Give another friendly Beast +6/+6. Two ways to get that bump! The (3-star) minion Impatient Doomsayer has Avenge (3): Add 2 random Demons to your hand! 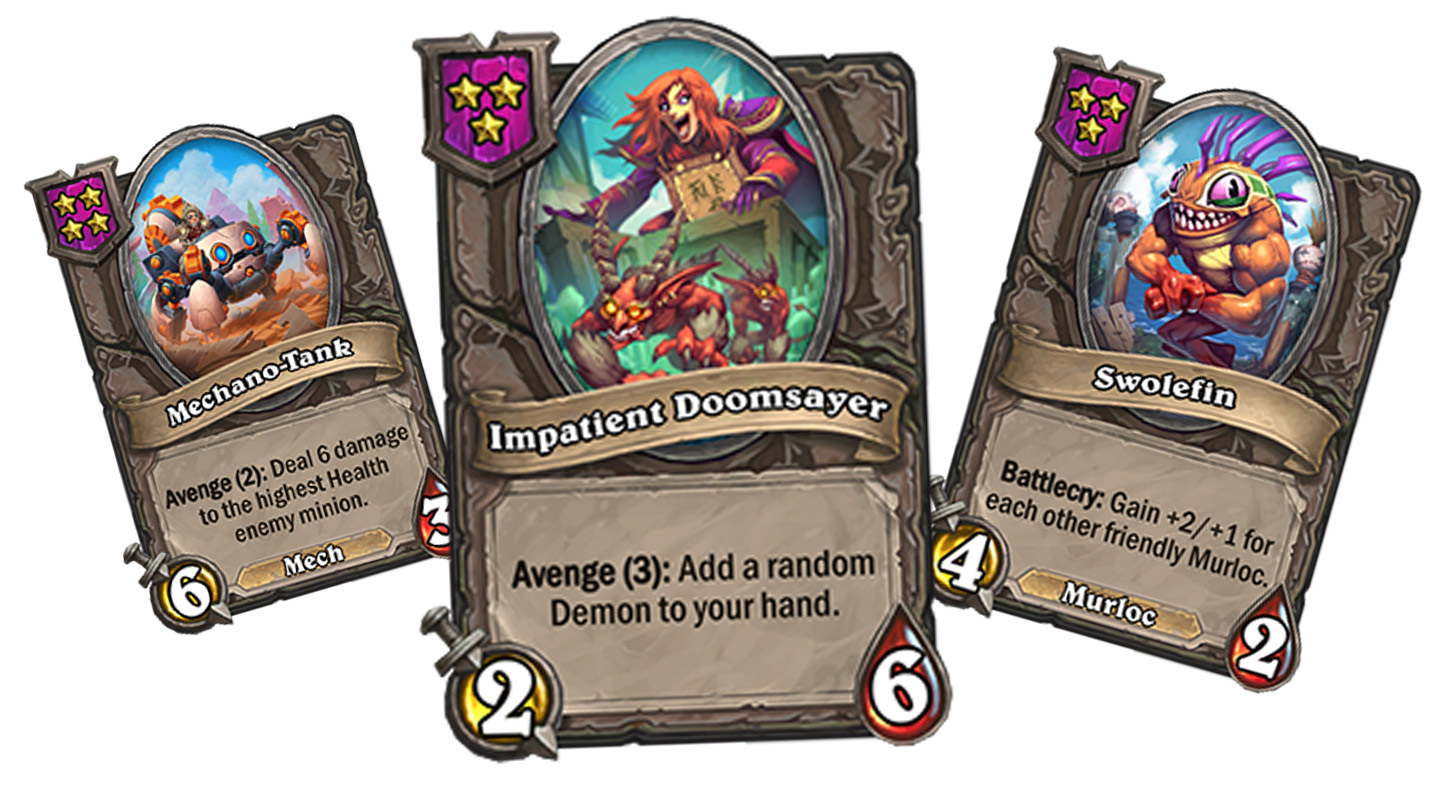 Avenge comes to the biggest monster with Mechano-Tank, which has Avenge (3): Deal 6 damage to the highest Health enemy minion. Murlocs get some new hard-hitters with this set too, including the minion SI:Sefin. That’s a parody of the “SI:7” collection, of course.

A new Elemental called Dazzling Lightspawn has Avenge (2): Elementals in Bob’s Tavern have +1/+1 for the rest of the game. A tier-3 minion Budding Greenthumb has Avenge (3): Give adjacent minions +2/+1 permanently. A tier-4 minion by the name of Witchwing Nestmatron has Avenge (3): Add a random Battlecry minion to your hand. 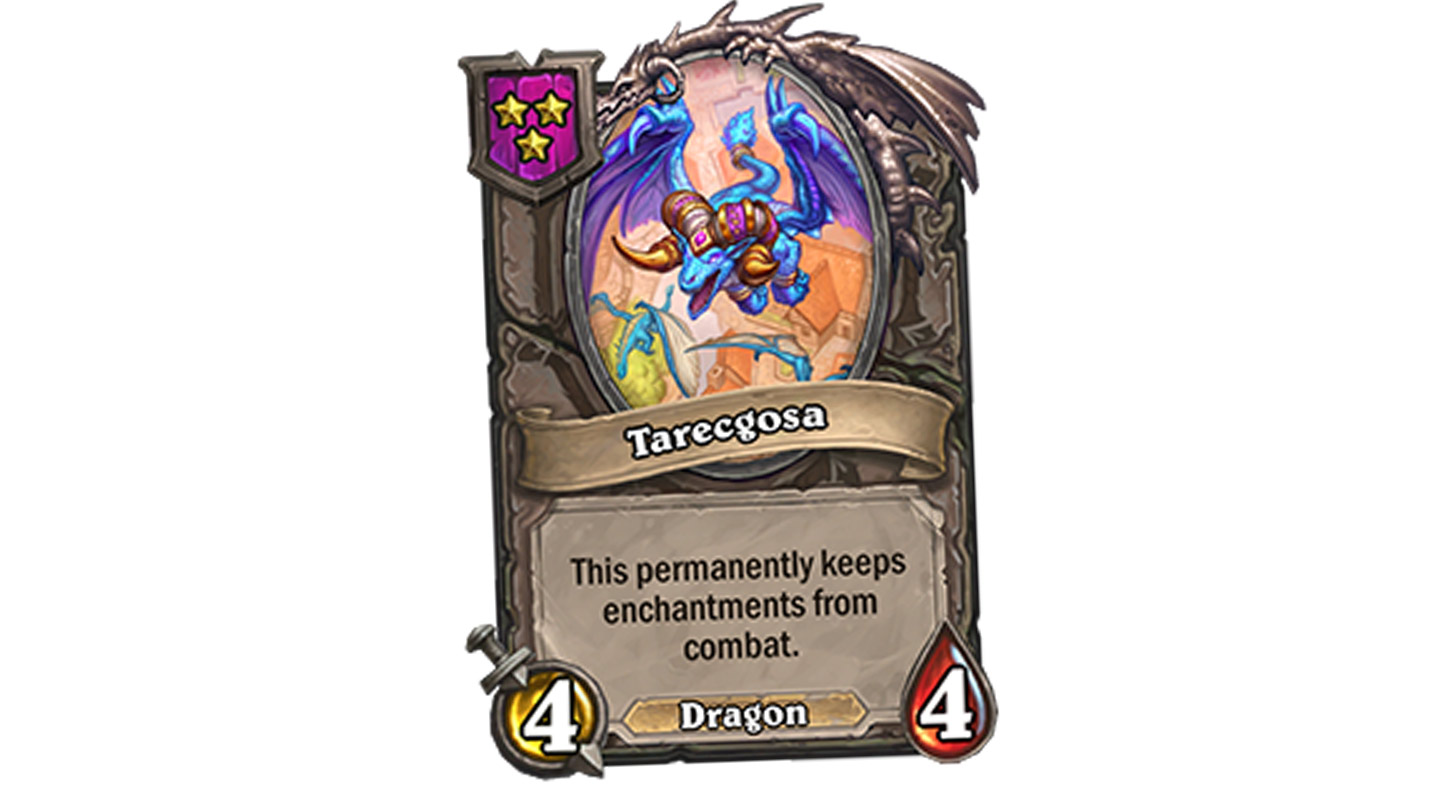 The most game-changing new minion of the bunch might very well be Tarecgosa. This Dragon permanently keeps enchantments given to it from combat. A lot of combat-only enchantments are only really worth the effort early in the game. If they stick around, even for this one minion – it could get WILD.

Just ONE minion was changed in this update – that’s Arm of the Empire. The skill remains the same, the ONLY difference is that it has 4 Health instead of 5 Health. 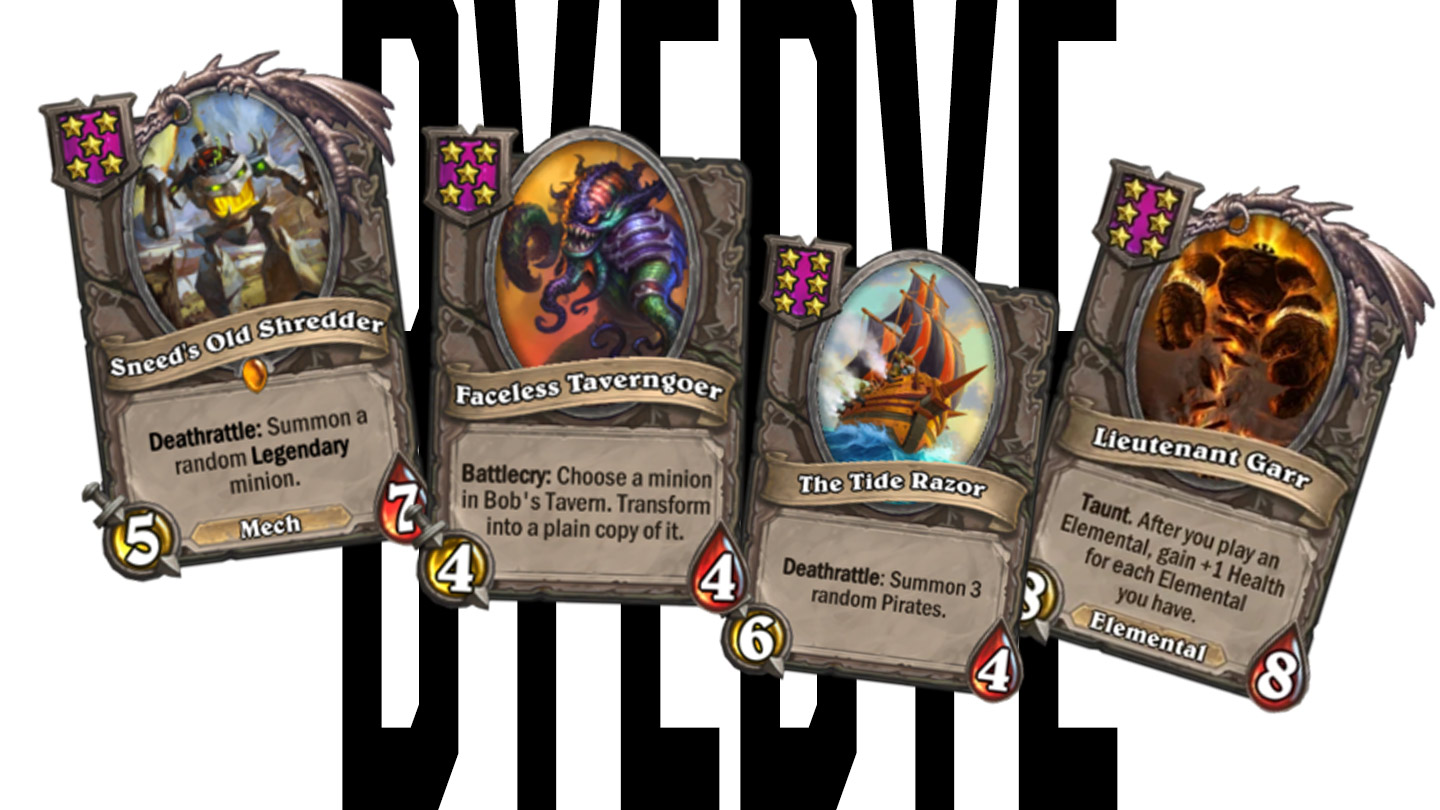 In Tavern Tier 5 and 6, we’re going to need to pour one out for some of the greats. Say goodbye to Sneed’s Old Shredder! Also bid farewell to Nat Pagle, Extreme Angler, Seabreaker Goliath, Ironhide Direhorn, Mythrax, the Unraveler, Mal’Ganis, and Faceless Taverngoer. Tier 6 has just two removals: The Tide Razor and Lieutenant Garr!

This update adds a hero by the name of Cariel Roam who attains a growing skill (rank). At Tavern Tiers 1 and 2, Roame has the skill “Conviction (Rank 1)” that gives a random friendly minion +1/+1 for 1 mana. At Tier 3, this goes up to three random minions, and Tier 5 changes to five random minions.

Perhaps the most awesome Hero in the entire Battlegrounds arena is the new Master Nguyen. This Hero has “Power of the Storm,” a passive skill that says: At the start of every turn, choose from 2 new Hero Powers. That could be awesome, or it could be a mess!

Players with Battlegrounds Perks will be the first to have early access to the new Heroes. These Heroes will be “formally released” on September 14.

A few other changes

Darkmoon Prizes will be removed from the game entirely, starting with the new season. The new season also resets Battleground ratings for all players. The length of turns 3-9 are each 5 seconds longer. It is possible that the developers of this game may “further adjust the length of turns sometime in the future.”

Above you’ll see a 44-second overview of the changes that’ll arrive this week! Let us know if you’re just playing Hearthstone’s Battlegrounds format for the first time this week, or if because of the changes you’ll NEVER PLAY AGAIN!